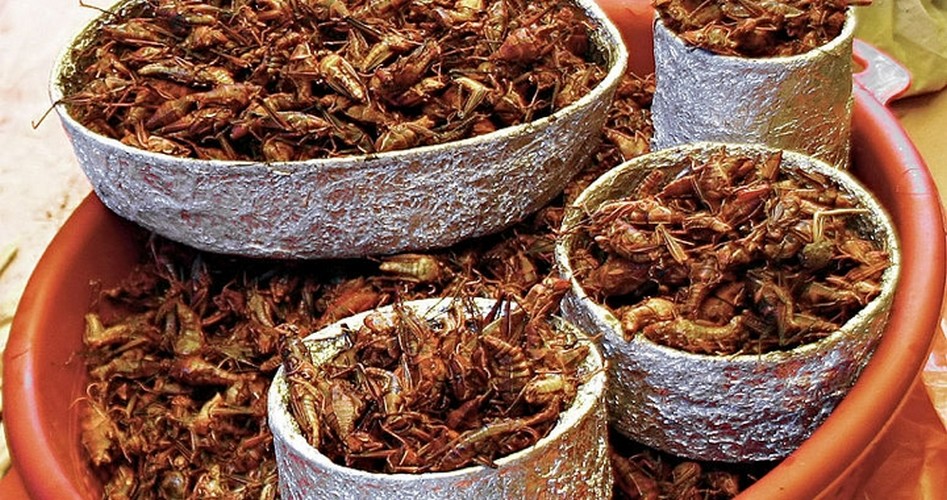 As part of its drive for global so-called “sustainability,” the United Nations has a new suggestion for the people of the world: Eat bugs instead of burgers. The controversial recommendations come from a new report by the UN Food and Agriculture Organization touting the supposed benefits of “edible insects” and the role they might play in future “food security” — assuming the bugs are farmed in a “sustainable” way, of course. The latest UN document also outlines propaganda campaigns to persuade Westerners and shows how expanding the international regulatory regime can help bugs-as-food proponents achieve their vision.

According to the controversial 200-page study, dubbed “Edible insects: Future prospects for food and feed security,” bugs are actually nutritious and environmentally friendly. The UN also claims it is “urgent” for people to start understanding that. “Insects as food and feed emerge as an especially relevant issue in the twenty-first century due to the rising cost of animal protein, food and feed insecurity, environmental pressures, population growth and increasing demand for protein among the middle classes,” the report claims, citing an array of real and imagined problems.

As such, according to the UN study, “alternative solutions” to conventional livestock and feed sources “urgently need to be found.” The consumption of insects — formally known as “entomophagy” — “therefore contributes positively to the environment and to health and livelihoods,” the UN FAO said in its report. It claimed, among other things, that there are numerous “environmental benefits” to rearing insects for food — especially if the bugs are fed human and animal waste. Among the potential benefits: reduced “greenhouse gases” that the UN blames for non-existent global warming, and fewer resources needed to produce insect-based food.

Plus, as the UN and legions of its functionaries point out in the document, press releases, and other efforts to promote the eating of insects, people in some cultures already eat bugs. “Insects are often consumed whole but can also be processed into granular or paste forms,” the report notes, adding that new ways of enjoying bugs are also in the pipeline. There are, however, numerous obstacles to convincing the world to consume creepy crawlers instead of beef and chicken.

Of course, the UN knows the idea of eating bugs sounds repulsive to most Westerners — it admits as much in the report. The global body and its proponents, though, already have a plan to deal with that. In the UN FAO report, created in partnership with Wageningen University in the Netherlands, the planetary body outlined a giant propaganda campaign that would include “tailored media communication strategies and educational programs that address the disgust factor.”

Indeed, much of the report focused on the “public relations” and “education” campaigns that would be needed to prod people into eating insects. Westerners would be the primary targets of the PR gimmicks, and the report outlines a full-spectrum plan to change hearts and minds, starting in school and reaching all the way into the press and even social media. Populations in poorer countries would also be targeted but with a different approach.

“The polarity of views surrounding the practice of entomophagy necessarily requires tailormade (sic) communication approaches for each of the various stakeholders,” the report argues. “In the tropics, where entomophagy is well established, media communication strategies should promote edible insects as valuable sources of nutrition to counter the growing westernization of diets. Western societies require tailored media communication strategies and educational programmes (sic) that address the disgust factor.”

The so-called “disgust factor” is mentioned all over the report, but the UN claims it is wrong and can be changed with enough propaganda and supposed education. “Common prejudice against eating insects is not justified from a nutritional point of view,” the study continues, touting the supposed benefits of eating possibly nutritious bugs. “Insects are not inferior to other protein sources such as fish, chicken and beef.”

The UN claims that Western populations’ feeling of disgust surrounding the eating of insects contributes to what it calls “the common misconception” that the consumption of bugs in poor countries is driven by starvation and is merely a survival mechanism. “This is far from the truth,” the report claims. “Although it will require considerable convincing to reverse this mentality, it is not an impossible feat.”

Citing other studies, the UN food bureaucrats complained that Western attitudes toward insect eating have influenced people in poorer countries. The study argues that “influencing” policymakers, investors, and the public at large using “validated information” on the potential of edible insects “can help to push insects higher on political, investment and research agendas worldwide.” It cites the controversial UNESCO to claim that “success of education for sustainable development” hinges on “cooperation between all sectors of the education community.”

Those “sectors” include education — primary schools through universities — as well as so-called “non-governmental organizations” (NGOs), private companies, traditional media like television and newspapers, online media, and even social networking services. “Taking this as a building block, addressing the entomophagy disgust factor in Western societies might depend largely on the ability to involve the entire educational community,” the report continues. “For this reason, engaging all sectors is recommended, particularly in Western societies.”

Aside from having to propagandize people about bug eating through schools and the media, which is already dutifully regurgitating UN talking points, another major barrier to more widespread insect consumption is the lack of a global regulatory regime to encourage it, the report states. “International standards can serve as a useful basis for countries to set up their regulatory frameworks for food and feed,” the report claims. “Aligning legislation with international standards, particularly Codex [Alimentarius] Standards, facilitates their compliance with trade rules and enables and facilitates the trade of food and feed products.”

In essence, the report argues for the incorporation of bugs-as-food guidelines into the controversial and bloated UN food regime known as Codex Alimentarius. “For developed countries, the absence of clear legislation and norms guiding the use of insects as food and feed is among the major limiting factors hindering the industrial development of farming insects to supply the food and feed sectors,” the FAO claimed, saying that international standards to push national legislation would help drive the changes sought by UN officials.

UN functionaries echoed those demands in the global body’s press releases urging people to eat more bugs. “The private sector is ready to invest in insect farming. We have huge opportunities before us,” claimed FAO bureaucrat Paul Vantomme, one of the authors of the report. “But until there is clarity in the legal sphere, no major business is going to take the risk to invest funds when the laws remains unclear or actually hinders development of this new sector.”

Even with a massive propaganda campaign and new global regulations to push insect eating, however, there are still obstacles to deal with before the UN vision of “sustainable” sewage-fed bugs as food can become reality worldwide. The report identified four “key bottlenecks and challenges” that must be addressed at the same time for the whole scheme to be successful.

First, the FAO said, proper evidence is needed to document the UN’s nutrition claims about bugs. Investigations comparing the environmental impacts of insect harvesting and farming versus traditional farming and ranching are also needed to support the oft-cited assertions that bug eating is actually more environmentally friendly. In addition, research is needed into the alleged “socio-economic benefits” potentially available — especially to determine whether or not it would really enhance “food security” for the poor.

“Finally, a clear and comprehensive legal framework at (inter)national (sic) levels is needed to pave the way for more investment, leading to the full development (from the household to the industrial scale) of production and international trade in insect products as food and feed sources,” the report claims. In other words, the UN needs more money to prove its claims and to “influence” humanity, as well as more power for central planning in the form of an expanded global regulatory regime.

While the latest leap toward influencing people’s dietary choices has drawn criticism and ridicule, the UN has long sought to expand its powers over virtually every sphere of human life. Despite growing opposition in the United States to the global body’s “sustainable development” scheme known as Agenda 21, the UN continues to spread its tentacles throughout the globe.

Whether people in the West will eventually eat UN-approved bugs remains to be seen. The fact that the international organization continues to broaden its size and scope, however, is indisputable. And it will keep happening in more and more areas of life as long as the American people put up with it — and pay for it.

Via The New American