Consciousness Beyond Chemtrails 2012: A Perspective-Day 2

Day 2 started with Dr. Ilya Sandra Perlingieri. She is a very small woman with a huge heart. She talked about Guia-ancient Greek word for Mother Earth. She talked about how the Earth is a living , breathing being.

“We are the caretakers of this planet” – Dr. Ilya Sandra Perlingieri

She talked about how the poisons in the atmosphere and in the water have become detrimental to our survival on this planet; how never before experienced diseases will continue to spread and as our planet becomes sicker, so will we. She spoke about our treatment of the planet as a garbage pail. I didn’t even know there was garbage islands in the oceans. Her presentation packed a powerful punch, showing all of us at the conference that it’s more than chemtrails that are affecting humans on this planet. In fact we must be just as cognizant of all pollution, oil spills, and garbage poisoning the breathing, living mother Earth if we are to survive into the next century.

The next speaker, Alfred Lambremont Webre, a futurist, discussed other beings living in the universe. Alfred’s investigative journalism has exposed an international war crimes racketeering organization using exotic technologies such as the HAARP aerosol/chemtrails weapons system for tectonic and weather warfare, mind control and other large-scale destruction of the natural environment and depopulation programs. Once again, this integration of the esoteric with the chemtrail and geoengineering agenda was seemless. The audience was just as attentive and responsive to talk of alien life as they had been to the explanation of Corexit during Dr. Perlingieri’s discussion of BP (or Beyond Prosecution, as she referred to them). This melding of the science with the esoteric showed the extent to which participants in this effort are open to all the multiple dimensions of reality as we know it, and as we are just beginning to understand it.

One of my favorite presenters was next, Mark “Dr. Dream” Peebler. He helped make the atmosphere “cleaner” and “happier” with his magnetic personality and beautiful flow of positive energy that radiated from him during his speech. We learned how we can use the power of the mind and body to help us in our continuing journey in this lifetime and help protect ourselves from the negative, dark forces that rule the planet. He was a breath of fresh air after hearing all of the challenges and bad news from the day before.

Deborah Whitman reminded me of my grandmother, but don’t be fooled by her white hair an innocent face. This woman is the nightmare of the NWO just because of the fact that she is such an average concerned citizen. She suffers from chemical sensitivity and this brought her on the chemtrail issue and she has been on a crusade ever since. I met her on the first day of the conference, near her booth. I didn’t know who she was at first and we started to talk about chemtrails and pictures. I told her I had taken many photographs of chemtrails in Mesa, AZ and she asked if I could send her some to use in a future video or presentation. I said no problem. I had no idea who she was at the time, she was so quiet and inconspicuous.

Roseanne Barr and Cynthia McKinney were special guests, they were not in the original line-up. Having them there increased the sense of activism that this conference was more than just about gaining knowledge about the latest advancements of the NWO, it was in fact about a movement. It was the chance to make a difference in our world through both traditional and non-traditional channels, and it was of course about getting the word out to as many people as possible. If Roseanne Barr can draw attention to this issue, then bless her for her celebrity. If we can laugh at the ridiculous circus of politics, and stand up in the front row for truth then the presence of politicians are more than welcome, they are necessary. 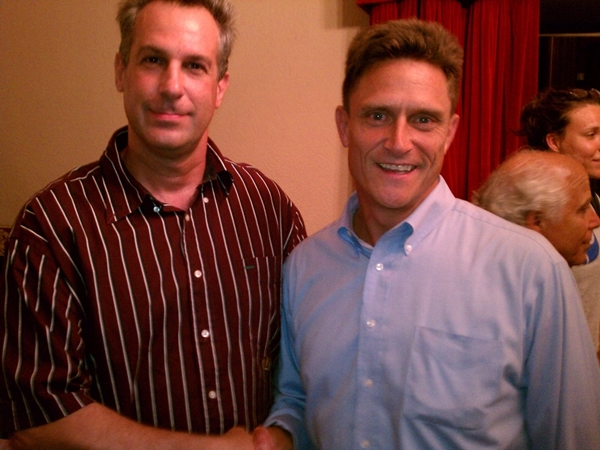 Now for the event that everyone was waiting for. The second movie by Michael Murphy on chemtrails called “Why In The World Are They Spraying”. By this time the theater was filling up with people who, for $15 could buy a ticket to the movie premier only. I would say that there was around 150 people by this time and the theater was electrified with positive energy in anticipation of this highly awaited event. At the end of the movie, Michael Murphy stood at the podium and expressed his gratitude to all those who had assisted in the completion of this monumental endeavor. There was time for questions from the audience. The first question came from the back. It was about the esoteric issues that had been addressed throughout the previous two days of the conference. “What about the reptilians?” the woman from the back of the room asked. There was some chatter. Some of the audience members were obviously irritated. Micheal Murphy handled the question with poise and integrity. All of those issues are important, he said, but the goal of this movie is to get the word out about chemtrails and to get the spraying programs to end. He created a clear vision of how we could move forward in this movement, knowing all we know, and yet sharing what people are ready for. The deep and complex issues surrounding spraying deserve our attention, but more than anything, we must work in a concerted effort to get the spraying stopped now. We may never know the whole truth, but our grandchildren do not have time for us to delay. The time to stop this spraying must be today!

This film, I believe, is by far the most in-depth analysis of the chemtrail/geoengineering issue that I have seen, clearly outlining critical motives behind the program of altering natural weather patterns, changing soil chemistry, and taking control of our food supply. This is a must see movie, I recommend it to everyone who wants more information on what the globalists have planned for humans and the Earth. They are trying by any means necessary to achieve their goal of geoengineering the planet.