Vaccine Passports: “It’s China-style Suppression of Our Liberties on a Grand Scale”

The New American
by Annalisa Pesek 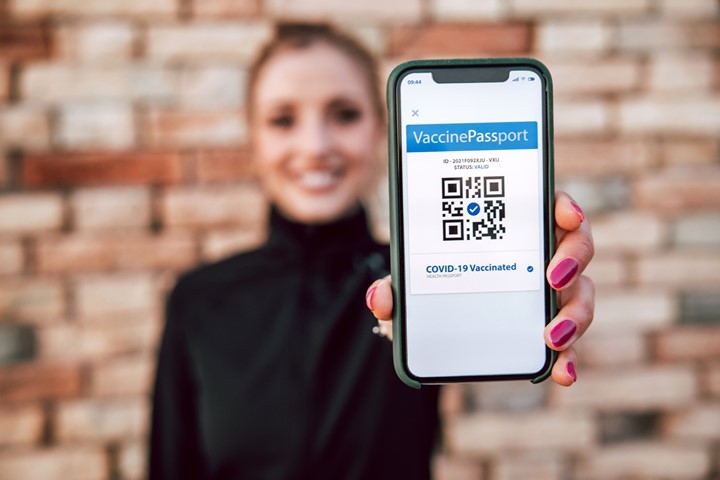 Naomi Wolf, a former advisor to President Bill Clinton, cultural critic, New York Times best-selling author (The End of America: Letter of Warning to a Young Patriot), and CEO of the tech company Daily Clout, has crossed the political aisle to join mostly lone conservative voices warning forcefully against both a national and global rollout of COVID-19 vaccine passports.

In recent weeks, the liberal author has appeared on conservative TV and talk-radio shows, such as Fox News’s The Next Revolution with Steve Hilton and The Eric Metaxas Show, to signal the midnight cry on vaccine passports, which she contends are part of “a carefully constructed, systematic, biofascist rollout of a new biosecurity state involving the constant upgrade to vaccinations, constant monitoring…and 360 degree surveillance.”

“Once this rolls out you don’t have a choice about being part of the system,” cautioned Wolf in a recent interview with author (Bonhoeffer: Pastor, Martyr, Prophet, Spy; Miracles) and conservative radio talk show host Eric Metaxas.

A stalwart supporter of exposing the potential harms of COVID-19 vaccines, with an instinct to question everything, Wolf told Metaxas, “Nothing is supposed to be off limits intellectually [in America]…. [Yet] there is [currently] a mantra of sanctity being woven around the mere act of vaccination…. I am not an antivaxxer but I am certainly anti-going back to the Middle Ages and leaving the Enlightenment behind and having a secular priesthood that says what we are and what we are not allowed to question.”

COVID-19 vaccination programs are sprouting up en masse across the United States. Funding these plans are billionaires such as Bill and Melinda Gates, who pour millions annually into high-profile media companies, including the New York Times, the Guardian, National Public Radio, as well as the corporation Centers for Disease Control and Prevention (CDC). Informed Wolf, the CDC receives a staggering “$12–17 million a year” from the Gates Foundation.

On April 6, the White House announced that the Biden administration would not be supporting or working with developers to establish a national “vaccine passport,” but Wolf is skeptical.

She decried the passports as a global rollout, backed by corporate interests and funding: “Microsoft has a contract to build the vaccine passport. They already have a prototype. It’s a completely closed circle.”

“I cannot stress this enough,” continued Wolf. “The vaccine passport is the social credit system that China has. It doesn’t lead to it; it is that. It takes no engineering; it takes literally the flick of the backend. I’m talking as a tech CEO … and it takes no special addition to merge your Google Wallet or your Apple Pay or your Paypal with your vaccine status.”

“It’s a China-style suppression of our liberties on a grand scale,” she went on to say, slamming the New York Times for “colluding” in “a very, very hideous and quite systematic process of constructing anyone who critiques what is clearly a biofascist rollout of a new biosecurity state.”

As a Rhodes Scholar, Democratic advisor, Jewish, a resident of urban New York City and San Francisco, Wolf is indeed “in the right tribe.” “But just to question Biden or China’s influence on the United States or vaccine fascism ‘otherizes’ me in the camp of yokels that are being constructed by the New York Times. It declasses me, de-platforms me, risks censoring me, people won’t invite me to their conferences anymore. That’s exactly how the Nationalist Socialists consolidated power in 1933; it’s ugly and it’s obvious this is happening.”

Wolf accuses the New York Times, which allegedly receives millions from the Gates Foundation each year (which might affect its coverage) of inventing “a kind of caricature of white fundamentalists … who are too stupid to accept Dr. Fauci … and are anti-science because they don’t necessarily think Pfizer has all the answers…. It’s really offensive, I think it’s racist, and they shouldn’t do it.”

Metaxas, a self-described white evangelical, and a skilled speaker, rarely wanting for a witty retort, was admittedly rendered speechless at multiple points in the conversation. “What they’re doing, as they demonize groups of people,” he finally said, “[They] are saying that these people [white evangelicals] are stupid and anti-science…. They [the New York Times] are enabling the cancel culture to move forward in the way it did in Germany in the 1930s…. If you question it, you have to ask, do I want to get in trouble.”

Responded Wolf, “This is a technique of creating an insider’s and outsider’s society, then starting to shove opportunity to those who go along and close down jobs, professional advancement to those who don’t go along, it’s absolutely classic of building a fascist society.”

Who Is Really Behind this Global Takeover?

World leaders ambitiously chasing after power in their mission to “stop the spread” of COVID-19 seem to be both in concert with and competing against one another to see who can achieve complete control of the citizenry, following China’s lead in an attempt to curb individual freedoms completely. Are they really so blind?

“In America, this biofascism is being led by Democrats,” declared Wolf. “It’s the Republicans who are the sole bulwark that I’m working with to try to stop some of the worst of this legislation. But in Britain it’s a Tory government that’s rolling it out. In Canada, it’s Premier Trudeau. In Germany it’s Merkel. This is not partisan. We have to call it as we see it. These are directives coming down probably from a hellish amalgam of the World Economic Forum, China, and Bill Gates, and two or three tech bros going along for the billions.”

Wolf, who investigated Gates in 2017, expounded on the Microsoft founder’s profit margins, along with those of Amazon and Google, since the start of the virus outbreak in March 2020. “They are up around $22-100 billion dollars,” she reported.

The monumental investment on the part of technocrats in this grand design to remove freedom from the face of Western civilization could not be more apparent. Wolf detailed Gates’s deep-pocket funding of “geoengineering technology.” “The patent [to this technology] is owned by Silicon venturers in Silicon Valley and Bill Gates, who say that if you don’t continue to do it once you’ve started the world faces catastrophic warming.”

She further noted that the tech giants and Gates, “having dominated the computer space, want to colonize medicine and colonize the government as business models. The pandemic and buying up of influencers allow them to be the source for the updates and the boosters this vaccine will require, according to Moderna’s own site.”

But what do most Americans know about Bill Gates and his foundation? Wolf’s portrayal is grim. Allegedly, Gates “bought up a bunch of lawmakers at Harvard and Stanford and the department of energy, and the reason he wants to do this is to coat the globe in chalk dust or sulfates to prevent the sun from shining…. It may sound like a science fiction novel but the reporting is MIT, Harvard, Stanford, Bloomberg, Opinion.”

What’s Going on in Israel?

Surprisingly, leading the global vaccination push, marching to the “false drumbeat of death,” as Metaxas says, is the nation of Israel.

Wolf zeroed in on Denmark and Israel, both of which have forced their citizens into vaccine passports.

“This is out of the pit of hell!” exclaimed Metaxas. “Why do you suppose there are people on the Left going along with this?”

She continued, “There’s also this kind of blind spot and this is human nature, but it’s like if he’s [Joe Biden] a Democrat he can’t be taking orders from China for a CCP-style social credit system in the United States…. So this is very dangerous, because when you believe you’re not capable of evil that’s when evil comes rushing in the door.”

What Can Americans Do?

Courageous scientists and influencers, such as Wolf and Metaxas, and medical professionals, including the thousands who signed the Great Barrington Declaration, are heeding the warning and rising up against these evil forces threatening our freedoms and our way of life. But time is running out. As exemplified in the vaccination rollout in Israel, it could be a mere matter of months before this machine destroys our liberties.

“Freedom of assembly, freedom of speech, freedom to pray, freedom to run your business, privacy of your medical records, it will all be gone unless we can stop this,” warned Wolf.

To stop this, Americans must take the firm stance encouraged by Metaxas: “To refuse to get a vaccine passport for any reason as a matter of principle.” One of the little things citizens can do is to decline the opportunity to scan QR codes so conveniently placed at tables in restaurants, deceptively suggesting they’re easier to use than a regular menu. In fact, it takes one scan for the app to gather all of your data — personal, financial, medical, even your credit history. It’ll be over, cautions Wolf.

Yet as Wolf emphatically stresses, refusing to participate won’t matter if the vaccine passport plan is rolled out. Americans can take action by supporting Republican governors and initiatives to halt this legislation, but they must do it now, before it’s too late.