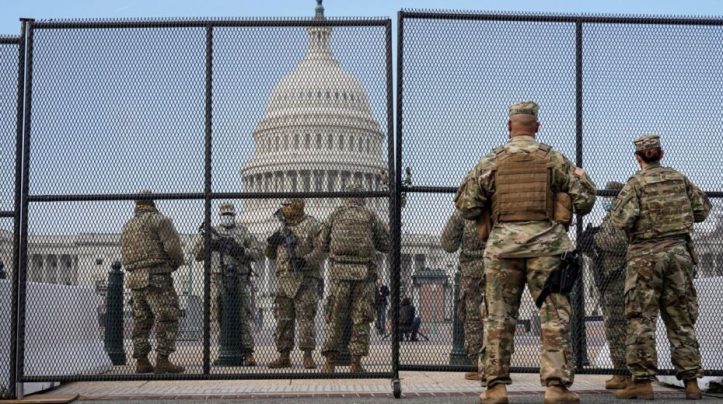 It was a stark image never before seen in Washington, DC, and one that bodes ill for the future prospects of the country. A locked down capital ringed in barbed wire, with 25,000 troops encompassing the Capitol building, provided a surreal backdrop to Joe Biden’s inauguration as the 46th POTUS.

The excuse Democrats have provided for turning the ‘citadel of democracy’ into a maximum security prison is not due to a growing distrust with the electoral process. Nor was it blamed on the spectacle of the mainstream media and Big Tech silencing the voices of exactly one half of the U.S. electorate – up to and including that of the now former president, Donald J. Trump. No, to suggest such irrational things would attract howls of ‘conspiracy theory’ from the liberal gallery.

Thankfully, we have Silicon Valley fact checkers and corporate media commentators to lead us to the valley of truth, which informs us that all those Trump “insurgents” who invaded the Capitol building on January 6th were motivated by pure evil intentions rooted in racism, sedition and white supremacist ideology. And as Hillary Clinton suggested during an off-the-rails interview with Speaker of the House Nancy Pelosi, Trump and his motley crew of deplorables may have taken their marching orders from none other than Vladimir Putin himself. Who needs fiction writers these days when we have the Democratic Party?

Good evening. Nancy Pelosi and Hillary Clinton are calling for a 9/11 Commission on conservatives to declare them agents of Russia.

Conservatives need to come to grips with the realization that they are not dealing with rational people who will be willing to engage in cool-headed discussion and debate. Despite a full sweep of the political landscape, the left remains consumed by a collective fit of rage, hysteria and raw emotion that shows no sign of abating. Why? Partly due to political immaturity in the ranks, and partly because ‘victory’ for the left no longer means victory at the polls; these fanatics, for that is really what they are, will not rest easy until the political opposition is shorn of its voice and representation. In other words, when it is completely and unequivocally obliterated. And given the political proclivities of Big Tech and Big Media, those dreams are dangerously within reach. Unless the right is able to essentially build its own internet architecture to bypass the left’s censorship machine, they will eventually go the way of the dinosaurs as a political force.

In the meantime, Joe Biden, or whoever will be pulling his strings, will ram through warped liberal social experiments masquerading as credible, time-tested programs designed to stabilize the nation. Of course they are nothing of the sort. These are globalist-backed policies – such as defunding the police, opening the border, vilifying the right as ‘racist,’ and sexualizing the minds of elementary-age children – designed to utterly destabilize the nation and all of its core institutions, including not least of all the nuclear family. Anyone who speaks out against these reckless initiatives will be struck down by the harshest cancel culture cult ever known to man. In fact, ‘domestic terrorism’ legislation is already drafted that, if passed by Congress, will go far at stifling any dissenting voices from the right.

The very first line of the proposed legislation, entitled ‘Domestic Terrorism Prevention Act of 2020,’ which was conveniently prepared just weeks before the Capitol riots erupted, states that “White supremacists and other far-right-wing extremists are the most significant domestic terrorism threat facing the United States…” Buried deep in the text is a single line devoted to Antifa, and nothing whatsoever about Black Lives Matter, yet these groups were responsible for torching and looting a swath of destruction across the United States following the death of George Floyd during an arrest by a while police officer.

Days before Biden’s ironclad inauguration, the media was out in full force propagating the notion of a connection between right-wing Trump supporters and – wait for it – terrorist groups like Al-Qaeda.

“I did see a similar dynamic in the evolution of al-Qaida in Iraq, where a whole generation of angry Arab youth with very poor prospects followed a powerful leader who promised to take them back in time to a better place, and he led them to embrace an ideology that justified their violence,” Retired Army Gen. Stanley McChrystal, the former head of Joint Special Operations Command in Iraq and the commander of all U.S. and allied troops in Afghanistan, said in an interview. “This is now happening in America.” So there you have it, straight from the horse’s mouth: the ‘deplorable’ right in the United States is almost on par with the same guys who carried out the terrorist attacks of 9/11.

Needless to say, with such outrageous comments making the rounds, there was little chance of a balanced message from Joe Biden’s inaugural speech with regards to the myriad problems now stalking America. Indeed, the address was top heavy with warmed-over clichés about “unity,” as well as references to racism and inequality.

After four years of groundless rhetoric about “racist Trump supporters” (yet no other conservative president has been so successful at attracting members of the Black and Latino community to the Republican standard than Donald Trump), it was only natural that Biden would allude to “a rise in political extremism, white supremacy, domestic terrorism that we must confront and we will defeat.” Coming just days after the riots at the Capitol building by Trump supporters, which the hapless mainstream media has been at great pains to label a “racist” event, the message made it amply clear for whom the bell tolls.

Here are the leaked documents from the race-segregated, taxpayer-funded session.👇

Once again, at this dangerous crossroads in American history, any hope for a true bipartisan breakthrough is doomed to failure, and more so now as the radical progressives in the Democratic Party are demanding the most outrageous social, cultural and political overhaul the nation has ever witnessed. No true conservative will ever abide by these changes.

At the same time, the voice and demonstrations of the right is not only being brutally vanquished, it is actually being assimilated under the banner of “domestic terrorism.” This marks the widest chasm between the two primary political parties in the United States, which, unless quickly bridged, will end in imminent disaster for the American experiment in democracy.