BLM, Antifa and the Communist Strategy to Destroy the United States 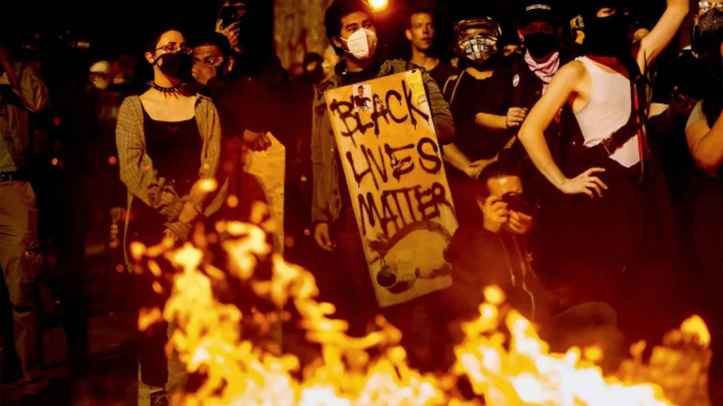 The unprecedented violence perpetrated by Antifa and Black Lives Matter embodies two of the Left’s biggest tactics in its quest to fundamentally transform the United States.

One is to force a race war by radicalizing African-Americans to a violent degree. The other involves making mayhem more intimidating by spreading police and firefighters as thinly as possible, thereby limiting their ability to respond quickly.

Manning Johnson, an African-American, spoke about the first tactic from personal experience. Describing himself as a “dedicated ‘comrade’ ” and a “professional revolutionist,” Johnson belonged to the Communist Party USA for 10 years. He served as a union organizer, director of agitation propaganda, and a member of the party’s national committee. Johnson even ran as the party’s candidate for a Congressional seat in New York.

But when the Soviet Union and Nazi Germany concluded their non-aggression pact in 1939 — nine days before Germany invaded Poland and began World War II — Johnson left the party. Following the war, Johnson testified about Communist activities to various legislative committees. In 1958, one year before his death, Johnson wrote about his experiences in Color, Communism and Common Sense.

Why did Johnson become a Communist at 21?

“Like other Negroes, I experienced and saw many injustices and inequities around me based upon color, not ability,” he wrote. “I was told that ‘the decadent capitalist system is responsible,’ that ‘mass pressure’ could force concessions but ‘that just prolongs the life of capitalism;’ that I must unite and work with all those who more or less agree that capitalism must go.

“To me, the end of capitalism would mark the beginning of an interminable period of plenty, peace, prosperity and universal comradeship. All racial and class differences and conflicts would end forever after the liquidation of the capitalists, their government and their supporters. A world union of Soviet States under the hegemony of Russia would free and lead mankind on to Utopia.

“Being an idealist, I was sold this ‘bill of goods’ by a Negro graduate of the Lenin Institute in Moscow.”

That graduate probably was Harry Haywood, who joined the Communist Party in 1925 and studied in Moscow soon afterwards. Johnson credited Haywood with playing a major role in convincing Stalin to incorporate blacks into the American Communist leadership during the Communist International’s 1928 meeting in Moscow.

“Stirring up race and class conflict is the basis of all discussion of the Communist Party’s work,” Johnson wrote. “The evil genius, Stalin, and the other megalomaniac leaders in Moscow ordered the use of all racial, economic and social differences, no matter how small or insignificant, to start local fires of discontent, conflict and revolt.

“Black rebellion was what Moscow wanted. Bloody racial conflict would split America. During the confusion, demoralization and panic would set in.”

Johnson’s own training reflected that strategy. Once he joined the party, Johnson received “two years of practical training in organizing street demonstrations, inciting mob violence, how to fight the police and how to politically ‘throw a brick and hide,'” he wrote. Johnson then attended a school where he studied “red political warfare,” he wrote, in which he “learned to use secret codes, ‘mail drops,’ organize clandestine meetings, ‘shake police shadows'” and grasped “the nature of communist sabotage and espionage.”

“We actually have an ideological frame,” co-founder Patrisse Cullors told a left-wing podcast. “Myself and Alicia in particular, we’re trained organizers. We are trained Marxists. We are super-versed on ideological theories.”

Cullors studied under Eric Mann, a left-wing organizer who worked with the Black Panthers and the Weather Underground in the 1960s. “Alicia” is fellow co-founder Alicia Garza, who also created the Black Futures Lab, a BLM subsidiary that organizes African-Americans and develops policies. The Black Futures Lab, states its website, “is a fiscally sponsored project of the Chinese Progressive Association.”

The CPA dedicates itself to promoting the interests of China’s government and Communist Party in the United States, which include Marxist revolution.

Regarding the family, BLM stated its position before deleting it from its website:

“We disrupt the Western-prescribed nuclear family structure requirement by supporting each other as extended families and ‘villages’ that collectively care for one another, especially our children, to the degree that mothers, parents, and children are comfortable.”

That position not only restates Karl Marx’s demand to end the nuclear family. It alludes to the alternatives Leon Trotsky advocated.

“Abolition of the family!” Marx wrote. “On what foundation is the present family, the bourgeois family, based? On capital, on private gain. In its completely developed form, this family exists only among the bourgeoisie.”

Even the quest to defund the police embraces Marxist ideology. These words Mann wrote in 1999 express attitudes that are all-too-familiar to today’s Americans:

The Black Panthers in particular argued that the prisons and police were colonial instruments, and thus bourgeois concepts of ‘crime’ or ‘innocence and guilt’ could not be used to justify the military occupation of an oppressed community. The demands to free all political prisoners including all black men and women were based on the assumption that the greatest danger to the black community was not black-on-black crime, but police-on-black crime. Armed self-defense groups, community patrols to monitor police behavior and the demands for the most stringent police review boards were efforts to structurally reduce police brutality by placing the police under black civilian authority.

The protesters in this video epitomize Mann’s thinking. Their leader asks, “Who do we protect?” They respond, “Black criminals.”

Garza succinctly summarized BLM’s objectives and ideology at a left-wing conference in 2015:

BLM and Antifa would have found a kindred spirit in Robert Williams, a black activist in the mid-20th century. In the final third of his career, Williams embraced radical Marxism and history’s worst political mass murderer, Mao Zedong. Williams’ newspaper, The Crusader, advocated “an urban guerrilla war of self-defense” to foment revolution, he wrote in 1964.

“The most aggressive and irrepressible arm of the overall organization would be the fire teams,” he wrote in 1965. “The mission of these thousands of active fire teams would be setting strategic fires. They could render America’s cities and countryside impotent. The fire teams roving in automobiles would find unguarded rural objectives even more accessible. A few teams could start miles and miles of fires from one city to the other.”

Such arson would have two goals. One would be to overwhelm first responders and the military.

“State forces would be forced to spread their ranks and would not be able to sustain massive troop concentrations in a single community,” Williams wrote. “The heat and smoke generated from the fires would render some of the highways impassable to repressive troop reinforcements. The rural countryside covers vast areas and would require exhaustive man power, equipment and security forces.”

The second goal would be to create mass terror.

“The psychological impact would be tremendous,” Williams wrote. “By day the billowing smoke would be seen for miles. By night the entire sky would reflect reddish flames that would elicit panic and a feeling of impending doom.”

Given Antifa’s popularity in Oregon’s largest city, some members might be implementing Williams’ plan. Despite denials from law enforcement in Portland, numerous Oregonians recorded videos of arsonists caught in the act. One man arrested for arson in Washington even attended anti-police rallies.

Perhaps more incriminating is Antifa’s message to its members: “Be water. Spread fire.” A sheriff’s deputy from Oregon’s Clackamas County even connected Antifa to the state’s wildfires. Those comments got him placed on leave.

Johnson’s epitaph as a “professional revolutionist” resounds with even greater force today:

I saw Communism in all its naked cruelty, ruthlessness and utter contempt of Christian attributes and passions. And, too, I saw the low value placed upon human life, the total lack of respect for the dignity of man, the betrayal of trust, the terror of the Secret Police and the bloody hand of the assassin…