The U.S. Is a Failed State

Author’s note: This article contains over 100 hyperlinks. It is suggested that you read the text of the article first then go back and explore the linked sources at your leisure.
.

The U.S. cannot and will not protect its citizens against attacks by violent armed assailants, especially as politicians are being bought off by gun manufacturers and the National Rifle Association.

The U.S. will not provide jobs or a living wage to a significant proportion of its population, especially youth and racial minorities.

The refusal of Congress to pass national single-payer health insurance is genocidal for the poor, the young, the elderly, and the underprivileged.

U.S. industry is poisoning the natural environment as the bee population is killed off by glyphosate and fungicides and the food supply is degraded with GMOs and GE foods.

The pharmaceutical industry gets rich as it kills millions of people annually by facilitating misuse, overuse, and abuse of prescription medication.

The economy has become genocidal to the elderly by eliminating pensions for most and eroding the value of Social Security and other sources of fixed income.

Addiction to drugs and alcohol and an associated growth in crime is a major effect of the collapse of job and income security.

Life expectancy is less than that of many other developed countries and is falling.

The U.S. military constantly wants more money to further its aims to conquer the globe while society at home disintegrates.

American weapons of mass destruction have the power to destroy all life on earth many times over, yet the military wants bigger and better weapons.

The military thrives on war and has no interest in promoting peace with other nations.

The military must always come up with new and more frightening enemies to justify its bloated budgets.

The “War on Terror” was an excuse for the U.S. military to engage in multiple wars of conquest.

The military is developing new secret weapons to wage war in space.

The elevated position of the military and its immunity from political control propagate the falsehood that force and violence are the legitimate way to solve problems.

Influence on Hollywood by the military exploits and glorifies violence and is a major propaganda tool.

Video games, supported by the military and corporate interests, teach young people that killing is fun.

The military cares nothing for the excessive national resources it consumes at the expense of socially beneficial uses.

The U.S. military is one of the world’s largest environmental polluters.

A major purpose of the military is to provide the muscle for stealing other nations’ resources.

The stealing of resources began with the assault by white Americans on Native Americans and the theft of their lands and continues today in Latin America, Africa, the Middle East, and around the world.

The U.S. military and police are conditioned to regard reformers and protesters as enemies of the state, not people exercising their rights.

War is being waged against Russia and other countries through economic sanctions and military threats without any constitutional declaration by Congress.

U.S. foreign and military policy is based on a gigantic lie—9/11.

The U.S. is an oligarchy where the economy, politics, and media are controlled by the rich.

Working people are no longer readily allowed to organize through labor unions for fair wages and working conditions.

The minimum wage is too low for people to live on.

Wall Street creates and destroys businesses for the sake of financial profits regardless of the impact on individuals, families, and society.

America’s Transition from a Democracy to a National Security State, in Five Easy Steps

The U.S. economy is not driven by honest business enterprise such as manufacturing but is kept afloat artificially by bank and government-created bubbles, including the debt-driven bubble of military spending.

The elimination of the gold standard in favor of bank-controlled fiat currency debased the national currency and has led to a half-century of inflation.

Panic has set in as other nations steer away from the use of inflated U.S. dollars in the petroleum markets and as a reserve currency.

Student, housing, and consumer debt are creating a society of debt-slaves.

People are being sent to jail for non-payment of debt. Some with out-of-control debt commit suicide.

The federal government’s national debt is a growing burden to society that can never be paid off. George W. Bush with his wars doubled the national debt in eight years. It doubled again during the Obama eight-year war period.

The lack of decent jobs drives huge numbers of people into cybercrime, drug dealing, prostitution, and other criminal pastimes simply as a mode of survival.

The Deep State and Government

Agencies of the Deep State, starting with the CIA, are instruments used by the oligarchy to control the government and society and ultimately take over the rest of the world.

Lying and concealment are a way of life for all levels of government, especially the Deep State.

The government has never come clean about crimes of the past committed by the Deep State, including 9/11 and the assassinations of JFK, RFK, and MLK.

The Deep State continues to engage in targeted assassinations against U.S. citizens and people of other nations.

The CIA and other agencies of the Deep State work in secrecy to undermine other nations abroad and eliminate honest dissent at home.

The Deep State seeks to maintain total electronic surveillance of all individuals.

The Deep State tries to overthrow any government abroad that undertakes to reform itself in the direction of greater fairness to its own population.

Secretive government vastly increased its powers by setting up the Department of Homeland Security and passing the Patriot Act after the false flag of 9/11.

One of the CIA’s major abuses is its self-admitted role in the international drug trade.

The Deep State, the media, and the military foment hatred of countries like Russia and China in order to conceal their own abuses and consolidate their power.

The Deep State controls government at all levels—federal, state, and local.

The government seeks to foster Nazi-like practices in raising a cult to worship the flag, and by promoting wars abroad and oppressive police practices at home.

The government has militarized local police forces in order to oppress the poor and racial minorities.

All levels of government, including the police, are corrupted by political contributions, payoffs, bribes, and special privileges. 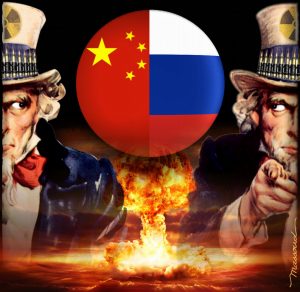 The media destroy freedom of thought by using its powers, including those of advertising, to regiment, control, and censor public opinion.

Government uses the media to deliver its own constant propaganda messages.

The media spew forth hatred and lies through such outlets as Fox News.

The media are controlled by a handful of oligarchic interests that suppress honest news reporting while attacking independent journalism at every turn.

The corporate-orchestrated attack on net neutrality seeks to eliminate independent opinion on the internet as was done in the past on cable TV.

Major media outlets such as the New York Times, Washington Post, CNN, and the national TV broadcast networks are controlled by the oligarchy and Deep State which use them as propaganda organs for their pro-war, corporate agendas.

The media-driven lie of the U.S. as “the exceptional nation” is a particularly pernicious piece of propaganda that has been used to justify abuses inflicted on other countries.

The Republican Party, which at present controls the federal government along with a majority of state and local governments, has become a racist/genocidal cult funded by oligarchs.

The Republican Party and its base blame the victims of economic collapse for their inability to find jobs and earn a decent living.

The Republican Party could not exist as it does at present without the support of fundamentalist Christian churches that support war and racism.

The Democratic Party lost touch with its historic populist mission by being taken over by the pro-corporate Clinton wing in the 1990s.

The Democratic Party has been manipulating people by frantically pushing the myth that the Russians got Donald Trump elected president in 2016.

The Democratic Party, including its so-called progressive wing, is as pro-war and controlled by the Deep State as the Republican.

No politician has a chance who wants fundamental reform such as reducing military spending, terminating the policy of endless wars, changing the monetary system, or basic economic fairness for all levels of society.

The oligarchy, the media, the government, the political parties, and the Deep State all foster hatred and division among segments of society in order to preserve their rule.

Racism against people of color and other nationalities remains deeply lodged in the national psyche and is used by the oligarchy as a means of control.

The higher educational establishment is controlled by the corporate/military state and offers little or no resistance.

The nation’s churches have been co-opted or cowed into silence and likewise offer no meaningful alternatives.

The drift to create a totalitarian American police state is well-advanced.

Can the U.S. survive as a nation for another generation? It seems doubtful without a major reform movement dedicated to correcting ALL the above-mentioned abuses. But before the U.S. destroys the planet it may simply collapse from its internal failures or through its policies of endless war and the guilt this has produced.

Yet none of this report is to denigrate the millions of people in the U.S. and worldwide who are awake to the present peril and are praying and working for a better future.

At present a major war between the American empire and the Eurasian nations seems a real possibility, though it would be much better if the U.S., Russia, and China came together in a positive alliance.

Miracles do happen if, paradoxically, people work for them.

Paul Yesse is the pen-name of a former U.S. government analyst.