There may be indeed “50 ways to leave your lover”. There are at least that many ways to start World War III, and it is more than likely that most of these ways will employed at one time or another.

There is no hiding what the Chinese are up to. They are prepared to employ the same strategy that Japanese did 74 years ago at Pearl Harbor. In fact, it is likely that the Chinese will employ the use of several and simultaneous “Pearl Harbors” in order to establish dominance on the Pacific Ocean and the ultimately the skies above. War games almost always precede a major conflict and it is clear that the Chinese preparations for war, judging by their activity level, is approaching fever pitch. As this article will reveal, the Chinese have moved beyond perfecting the stealth abilities of their submarines and have graduated to taking down the top weapon in the US Navy’s arsenal, the aircraft carrier. The signs are ominous and we may not have long to wait to see the Chinese employ their version of Pearl Harbor, 2016 Chinese style.

The Irony of It All

In times of prewar tension, Chinese warships visit Hawaii, the very site of the Japanese attack upon Pearl Harbor over 74 years ago. How ironic!

The Chinese visit to Hawaii has more irony than any TV drama.

“…In the afternoon a reception was held on board the cruiser Jinan for representatives from the US Navy. Afterwards, US and Chinese squadron commanders were invited to a ceremony of laying wreaths at the memorial dedicated to victims of the attack on Pearl Harbor in 1941…”

“After the grand ceremony, people could get on board of the Jinan, Yiyang and Qiandaohu ships, where Chinese officers conducted a tour to introduce visitors to the latest models of Chinese weapons.”

The latter of these quotes is is very ominous in that, for some reason, the Chinese seem very anxious to put on display the latest in their weapons technology. I would label this as blustering as a precursor to war. 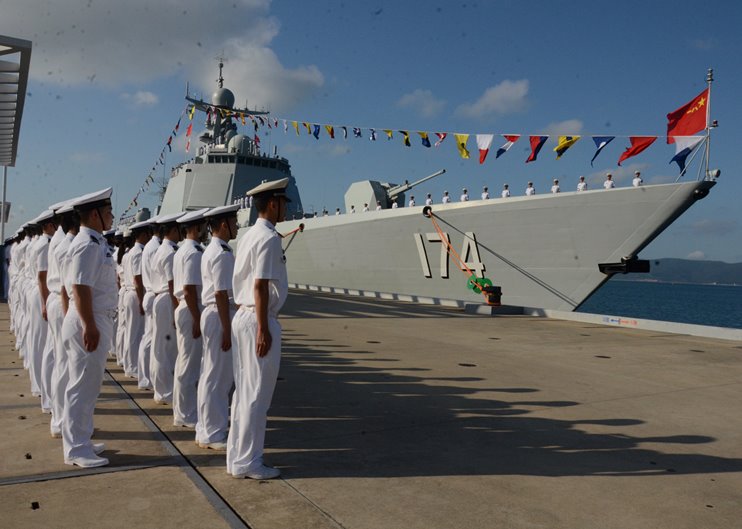 China is not standing on the laurels of this development as the very next stage Type 055 destroyer is in ALREADY in development as  write these words. Future Chinese destroyers are planned to be even larger, with displacement capacity of about 10,000 metric tons. This will allow these new destroyers to take aboard as many as 100 cruise missiles. Whether the US media acknowledges this or not, this is an unmitigated Chinese version of a naval arms race.

The French Show China How to Sink an American Aircraft Carrier

The shocking revelation that a U.S. Navy aircraft carrier group could be sunk by a nuclear submarine did not make the mainstream media, and what little mention was made on the Internet was quickly scrubbed by the guardians of the gate.

The story that was deleted, but has resurfaced was the fact that a 30 year old French submarine sank half of the Theodore Roosevelt Carrier Group. The Los Angles class of American submarines displace too much water to be of any good in defending the carrier from an attack by more stealthy and quicker nuclear submarines. The Pentagon has done its best in covering this up, but the Chinese and now the American public have access to this critical information. Also, on March 6, 2015, RT published an article which stated that the Pentagon was covering their tracks.

The Chinese defense media reported that the capabilities of U.S. Navy carrier groups is limited. In the special issue of 兵工科技[Ordnance Industry Science and Technology] (2015, no. 8) contained an interview with Chinese Submarine Academy professor 迟国仓 [Chi Guocang] as its cover story under the title: “A Single Nuclear Submarine ‘Sinks’ Half of an Aircraft Carrier Battle Group.”  The secret is out. America’s Navy is highly vulnerable.

Should it be surprising that it is now being revealed that the USS Reagan was shadowed and “sunk” in a Chinese military war game, a war game that violated international law. The French have indeed learned how to sink an American carrier. This is precisely what the Japanese failed to do on December 7, 1941. By design, the American carriers were away from Pearl Harbor on that fateful day. This time, the Chinese will not likely miss.

If American carriers get sunk, there is no American Navy.

There is now evidence that Russia and China are working together toward a day multiple Pearl Harbor destructions. I will detail the evidence in the next installment of this series.