Europe to Turn into Backwater Colony on Outskirts of US Empire

The world witnesses the emergence of two global cartels. I say global because establishing control over world goods markets is not the only goal. The plans include spreading the power of multinational corporations and multinational banks on all spheres of our life – economics, politics, information flows, medicine and education. It is no exaggeration to say that the creation of world governance is on the way. 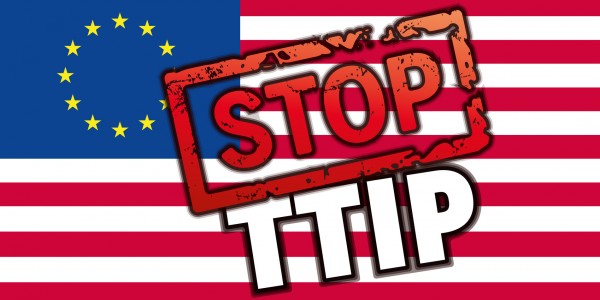 It’s worth to note that the talks on the both agreements have been conducted (still being held on the TTIP) in strict secrecy. The largest multinational corporations and banks initiated the negotiation process and are taking part in. Scarce information provided by media is misleading enough to create false impression that these are international trade agreements. As stated, the main goal is to eliminate duties and other restrictions for trade in goods. It’s not true. The reality is quite different.

Even after the Trans-Pacific Partnership agreement was signed, its text was not published. The fragments journalists managed to get access to prove it is not just another trade agreement. The document envisages drastic changes in many aspects related to economics and politics (anti-globalists believe it to be a global corporate coup d’état). Only 2 out of 26 chapters have anything to do with trade. Most of it grants far-reaching «new rights and privileges to corporations».

The game is not over. The agreement signed in Atlanta has to be ratified by the parliaments of the 12 countries. The esoteric document has many opponents.

In parallel, the talks on the Transatlantic Trade and Investment Partnership are in full swing. The next round of US-EU TTIP talks will be held in early 2016. The parties plan to finish the negotiation process before the Obama’s tenure expires. The TTIP will be the largest regional free-trade agreement in history to represent about 60% of global GDP and create a free trade zone stretching from the Hawaii to Lithuania. According to the media, the Transatlantic Trade and Investment Partnership seeks to eliminate or reduce tariff barriers between the European Union and the United States bringing EU and US standards and regulations closer together.

As in the case of the TTP, the United States is responsible for preparation and promotion of the TTIP. The White House and the government do the work while Congress is kept aside to prevent undesired information leaks.

The thick veil of secrecy did not help the authors of the project: Europeans have been expressing concern over the agreement during the recent two years. True, the implementation of agreement, if signed, will tip the balance to the favor of the US and ensue economic losses for Europe. But not only that. There are other aspects to cause anxiety, as well. For instance, health care. The United States will impose on the Old Continent its extremely liberal ecology and foodstuffs standards.

The main reason for concern is the prospect of doing away with what is left of democracy in Europe. Multinational corporations will be able to protect their interests by launching lawsuits. TTIP will enable them to demand the cancellation of state laws that deteriorate conditions for competition. For instance, the laws that set minimum wage rates. To large extent, the European integration has already deprived the EU member-states of national sovereignty in favor of supranational structures. With the Trans-Atlantic integration in place, the remnants of European states sovereignty will be transferred to a supranational center located in Washington or New York. Europe will become an American one-horse town colony.

The way the TTIP is being prepared shows democracy is on decline in Europe. In June 2013 28 EU member-states gave the European Commission bureaucrats a mandate to hold talks with the United States. It stoked resentment among many European politicians. Leaks took place. Finally, the document delegating the right to negotiate was published under public pressure. The procedure of the TTIP enforcement is outright undemocratic. The text of the document is to be published after its signature. Then it will be sent for ratification to the US Congress the European Parliament and the national parliaments of the EU member states. The agreement is a package deal; no amendments are possible. The pushy authors of the TTIP are sure the ratification process will go down smoothly. I don’t share this belief. The activities of those who endorsed the decision to delegate the authority to secretly negotiate on the TTIP to the European Commission have been put to question in some EU member-states.

On October 11, 2015 a large-scale protest took place in Berlin. People from all parts of Germany came to strongly object the Transatlantic Trade and Investment Partnership. Normally police is inclined to understate the numbers. According to police sources, 150 thousand took place in the action. Organizers say the number was half a million. Many posters called for preserving protecting democracy from corporations, especially US behemoths.

Stop TTIP movement sprang up in many EU countries launched by the European Citizens’ Initiative (ECI). The initiative enables one million citizens of the European Union, who are nationals of at least one quarter (7) of the member states, to call directly on the European Commission to propose a legal act in an area where the member states have conferred powers onto the EU level. As a result, about 3.3 million sign European Citizens Initiative against EU-US trade deal. It’s a good result for the «United Europe» with the population of 500 million. Stop TTIP handed over the signatures to the European Commission.

The European Commission actually rejected their application, on the grounds that the free trade agreements (FTAs) are not legal acts, but inter-institutional acts and that it «cannot make negative ratification proposals». Then the initiative handed over its petition to the President of the European Parliament (the only EU elected body), Martin Schulz, asking him to hold hearings on the issue taking into consideration mass protests taking place in Europe. There has been no reaction, so far.

The anti-TTIP protests take other forms as well. On November 13, Brussels-based EUobserver, cited Sueddeutsche Zeitung daily, which reported that the German ambassador in Washington was asked by Berlin to notify a formal protest to US trade representative Michael Froman and request that MPs can access documents related to the EU-US negotiations for the Transatlantic Trade and Investment Partnership.

The German government wants to address «the public reproach that TTIP is negotiated beyond the reach of parliaments and with disregard for democratic rights», the instruction to the ambassador quoted by the newspaper said.

There are reasons to believe that the European protests against the Transatlantic Trade and Investment Partnership will gather momentum in the next few months. Whatever is left of European democracy is at stake.