Why the Left Hates Columbus

The New American
by Steve Byas 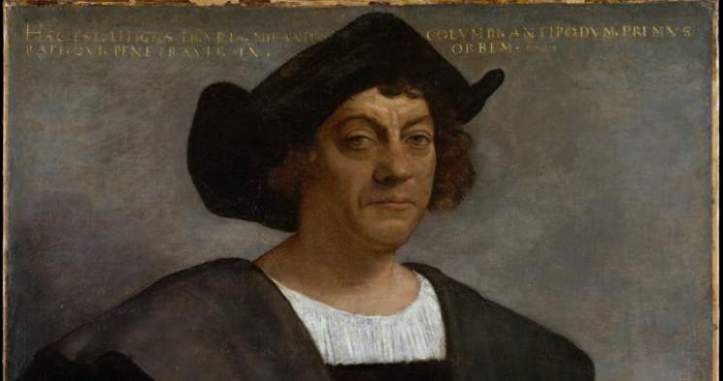 The second Monday in October marks Columbus Day — a federal holiday since 1937 — when Christopher Columbus first stepped ashore in the Western hemisphere.

Sadly, in recent years it has become fashionable to trash the great “Admiral of the Ocean Sea” as one of history’s main villains.

Columbus Day, observed as the actual date of the great achievement of Columbus — October 12, 1492 — until President Richard Nixon designated the second Monday of October as the federal holiday (so federal workers could have a long weekend), is now what many celebrate as “Indigenous People’s Day.” Not surprisingly, the radical citadel of Berkeley, California, led the way in 1992 in downgrading the great explorer by changing the name of his day.

Katy Schumaker, a classics and letters professor at the University of Oklahoma, repeated the mantra that has become the left-wing template in recent years:

There are plenty of other people who came and “found” the Americas before Columbus did. I think that even if Columbus isn’t necessarily important as the person to discover the new world, his voyage, and then further, Spanish and Portuguese settlements, set up a chain reaction that made the Americas what they are today. Things like slavery, the decimation of native populations, all of those things were initiated by that first contact.

This sums up the smug academic attitude about Columbus found on most college campuses: (1) He did not accomplish anything of any importance; and (2) to whatever extent he did accomplish anything, it was something repugnant to all right-thinking people, as he was somehow responsible for the slavery of millions of black Africans and the deaths of millions of indigenous peoples.

South Dakota dropped Columbus Day back in 1990, in honor of Native American Day, and in 2014 Seattle and Minneapolis created Indigenous People’s Day. Since then, many other local governments have followed suit, including Multnomah County in Oregon; St. Paul, Minnesota; Olympia, Washiington; Traverse City, Michigan; and Albuquerque, New Mexico. And, of course, many colleges also have concluded that Columbus must not be remembered — at least not in a positive way.

Oregon’s Multnomah County Chair Deborah Kafoury issued a statement claiming that honoring of Columbus was a celebration of “genocide.”

Benjamin Harrison was the first American president to issue a proclamation which encouraged the celebration of Columbus Day in 1892, upon the occasion of the 400th anniversary of the explorer’s discovery of the New World. Harrison considered it appropriate for Americans to honor Columbus and to show “their appreciation of the great achievements of the four completed centuries of American life.” After a lobbying campaign led by the Knights of Columbus, the Roman Catholic fraternal organization, President Franklin Roosevelt proclaimed October 12 of each year as a federal holiday.

Today, Americans of Italian ancestry are the most supportive of honoring Columbus, as he was an Italian from Genoa. In cities such as Buffalo, New York, with large populations of Americans of Italian ancestry, the day is still marked by parades and other celebrations. In Erie County, New York, Peter LoJacono of the Federation of Italian-American Societies in Western New York, told the Buffalo News, “This, for us, will always be Columbus Day. It’s a day we have always celebrated. We will continue to do so.”

So, the question is obvious. Is Columbus to be reviled or praised?

First, it should be noted that Columbus did not set out to “discover” America. Although popular culture now depicts him as being concerned primarily about gold and spices, this desire was actually part of a larger motivation. Columbus wanted to find enough wealth to finance a crusade to free the Holy Land from Islamic domination. Expecting to reach Asia by sailing west, he urged King Ferdinand and Queen Isabella, the Spanish sovereigns, “to spend all the profits from this enterprise on the conquest of Jerusalem.” (Emphasis added.)

The Muslims had conquered Constantinople a few years previously, completing their multigenerational conquest of the Christian world in the East, including the Byzantine Empire and the lands where Jesus had lived, died, and risen from the dead. Columbus, after a careful study of the Old and New Testaments, along with some readings in the works of the first century Jewish historian Flavius Josephus and the noted early church “father” Augustine, had concluded that the city of Jerusalem must be in Christian hands before Jesus would return.

While certainly the desire to reach the East by sailing west involved economics, Columbus did not set out from Spain to enslave American Indians. Indeed, he was ignorant of their very existence. After reading the travels of the Venetian Marco Polo, Columbus desired to reach the Gran Khan, the Mongol ruler of China. The Chinese monarchs had expressed an interest in the Christian faith. This created the idea within Columbus to convert China, and then with these combined Christian forces, proceed to drive the Muslims from the Holy Land.

Pre-Columbian America is pictured as a paradise by those who wish to denigrate Columbus. It was not. Slavery was hoary with age in America long before Columbus set sail from Spain. If Columbus is to be blamed for events which occurred long after his death, then he should be credited with certain achievements resulting from his voyages, as well. For instance, the Spanish Christians put a stop to the horrific human sacrifices and cannibalism practiced by the brutal Aztec empire.

Bartolomé de las Casas, a Spanish priest who advocated for better treatment of the native peoples, is often cited as the source of much of the alleged cruelties of Columbus. The truth is that Las Casas was complimentary of Columbus in his Historia de las Indias. “He [Columbus] was a gentle man of great force and spirit, of lofty thoughts and naturally inclined to undertake worthy deeds and signal enterprises; patient and longsuffering, a forgiver of injustices who wished no more than that those who offended him should recognize their errors, and that the delinquents be reconciled to him.”

Perhaps the most serious libel leveled against Columbus is that he committed genocide, and it is true that hundreds of thousands, perhaps millions, of native peoples died in the decades after the Spanish invasion. But this charge is also easily refuted. The greatest cause of the deaths of the indigenous peoples of the Western hemisphere was disease, as the Spaniards introduced smallpox, plague, and measles into North and South America.

Tommy De Seno, writing in The Truth About Columbus, stated, “It is wrong also to blame Columbus for bringing genocidal microbes to kill native Americans.” He noted that the detractors “make fun of him thinking he was in the East. So was his evil plan to bring disease to wipe out the East?”

As De Seno rightly contended, transcontinental contamination was inevitable at some point. While not as widespread a killer as smallpox was to the Indians, syphilis was introduced into Europe from the Americas, killing more than five million people.

But what did Columbus accomplish?

Although he was most likely not even the first person from Europe to make it to the Americas, none of these earlier “discoverers” changed the course of history. Columbus did. As Samuel Eliot Morrison wrote in his book Christopher Columbus, Mariner, “We now honor Columbus for doing something he never intended to do…. Yet we are right in so honoring him because no other sailor had the persistence, the knowledge, and the sheer guts to sail thousands of miles into the unknown ocean until he found land.”

Because of Columbus, millions of individual souls in the Western hemisphere were exposed to the Christian religion. While this is for some at best a non-issue, and for others an outright negative, it carried both eternal and temporal positive consequences for the indigenous peoples of America. Human sacrifice and cannibalism soon came to an end. In Europe, life was improved dramatically by the introduction of new foods such as okra, tomatoes, Indian corn (maize), squash, and more.

It is difficult to imagine how any person could wish upon the indigenous peoples of America the life that existed before Columbus, with human sacrifice and cannibalism. Indeed, if one were to make a “short list” of the persons in history who had done the most to improve the lives of more human beings, a name that would have to be on that list would be that of Christopher Columbus.

The effort to demonize Columbus is part of the larger campaign to attack the foundations of Western civilization. It is the same as the motivation for attacking the historical reputation of men such as George Washington and Thomas Jefferson. Because once these men are set aside as objects of admiration, they can be replaced with leftist icons, for the purpose of advancing a secular and socialist agenda.

In the end, Columbus is hated for his greatest virtue: He brought the Christian faith and western civilization to the New World.