Earlier this year AT&T and Verizon were caught modifying wireless user traffic to inject unique identifier headers (UIDH). This allowed the carriers to ignore a user’s privacy preferences on the browser level and track all online behavior. In Verizon’s case, the practice wasn’t discovered for two years after implementation, and the carrier only integrated a working opt out mechanism only after another six months of public criticism. Verizon and AT&T of course denied that these headers could be abused by third parties. Shortly thereafter it was illustrated that it was relatively easy for these headers to be abused by third parties.

While the fracas over these “stealth” or “zombie” cookies has quieted down since, a new study suggests use of such stealth tracking is increasing around the world as carriers push to nab their share of the advertising pie. Consumer advocacy group Access has been running a website called AmiBeingTracked.com, which analyzes user traffic to determine whether or not carriers are fiddling with their packets to track online behavior. According to a new study from the group (pdf) examining around 200,000 such tests, about 15% of site visitors were being tracked by the carriers in this fashion all over the globe: 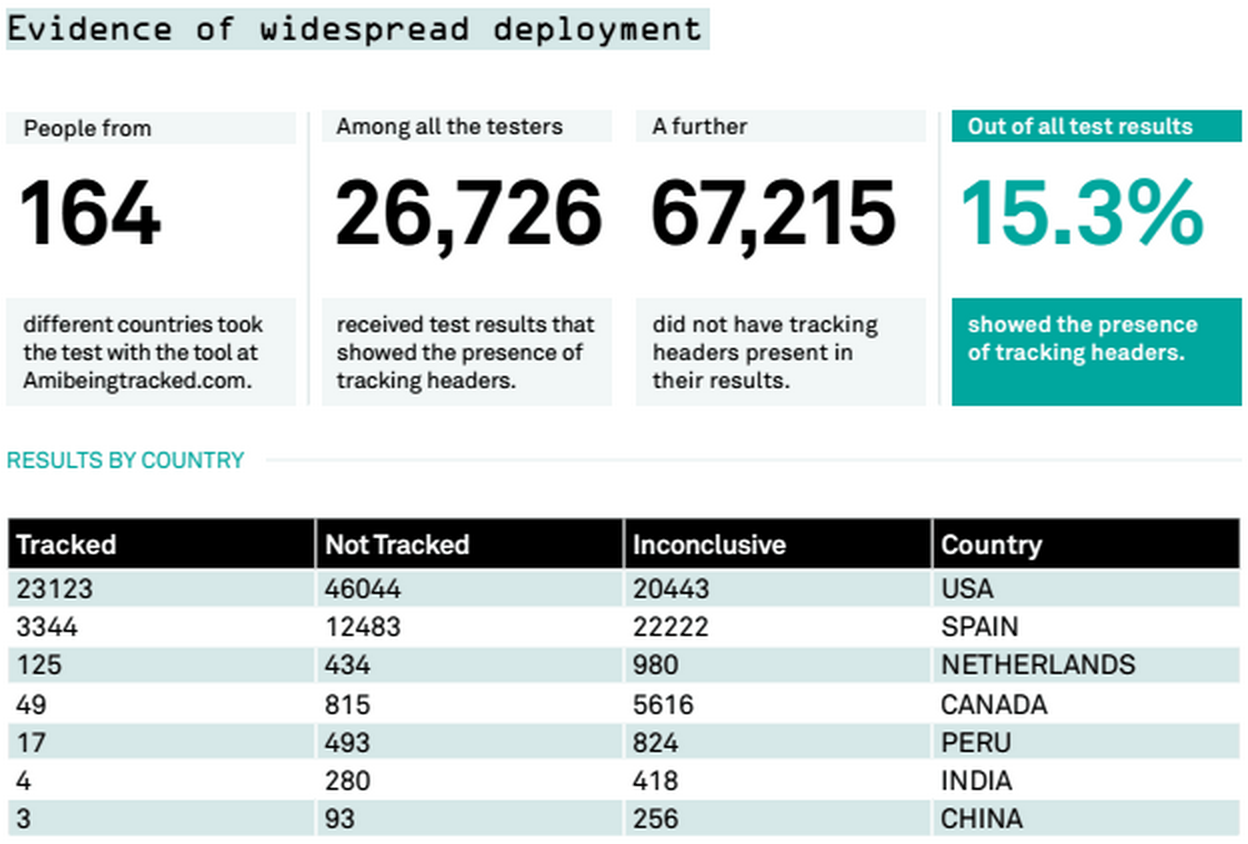 Globally, the report notes that AT&T, Bell Canada, Bharti Airtel, Cricket, Telefonica de España, Verizon, Viettel Peru S.a.c., Vodafone NL, and Vodafone Spain are all now using stealth headers. In many of these instances there’s no opt-out mechanisms in place for users, or the opt-in mechanisms that exist don’t actually work. Most regulators meanwhile don’t even realize this technology exists, much less have any plan to protect user privacy via hard opt-out requirements. The practice itself, and the stored data, the group’s authors note, makes a delicious target for hackers and the intelligence community alike:

“Using tracking headers also raises concerns related to data retention. When “honey pots” of sensitive information, such as data on browsing, location, and phone numbers, are collected and stored, they attract malicious hacking and government surveillance. This kind of collection and retention of user data is unsustainable and unwise, and creates unmanageable risks for businesses and customers alike.”

The W3C Consortium recently agreed, noting that stealth carrier tracking header injection is basically a privacy nightmare in the making that undermines user trust in the entire Internet:

“The aggregate effect of unsanctioned tracking is to undermine user trust in the Web itself. Moreover, if browsers cannot isolate activity between sites and offer users control over their data, they are unable to act as trusted agents for the user. Notably, unsanctioned tracking can be harmful even if non-identifying data is shared, because it provides the linkage among disparate information streams across contextual boundaries. For example the sharing of an opaque fingerprint among a set of unrelated online purchases can provide enough information to enable advertisers to determine that user of that browser is pregnant — and hence to target her with pregnancy-specific advertisements even before she has disclosed her pregnancy.

This is what has been happening while the marketing, tech and telecom industries bickered, prattled and grandstanded over do not track protections — that this technology makes irrelevant anyway. And while companies like Verizon have repeatedly claimed that no privacy or transparency guidelines are necessary because “public shame” will keep them honest, keep in mind that it took security researchers two years before they even realized that the telco was doing this. It took another six months of pressure for Verizon to heed calls for basic opt-out mechanisms most Verizon users don’t know exist. It makes you wonder: just how long will it take the press and public to realize future iterations of stealth tracking technology are being used?

Document: The Rise of Mobile Tracking Headers: How Telcos Around the World Are Threatening Your Privacy