This is a very close facsimile to what I recently saw in the sky. Was this a sign of things to come?

I cannot recall writing an article which has caused me so much consternation than this one. Last night as my family was returning from dining out near the beginning of twilight, I saw a gigantic cloud stretching endlessly upward and spreading out. It looked just like a mushroom cloud, the kind you would see following a nuclear explosion. Was this an ominous sign, or was this simply a case of personal projection of where my mind is presently at? I may never really know the answer for certain, however, this moment in time is reflective of where I believe the world is at in the present moment.

“History May Not Repeat, but It Sure Does Rhyme”

As I reflected on the historical importance and relevance of recent current events, I was reminded of Mark Twain’s famous saying about the replication of historical events and I believe that the times we find ourselves living in now, are reflective of the pre-World War I era.

World War I was characterized by an arms race, a race for currency dominance (i.e. during the early part of the 20th century, the race for control of resources manifested in a race for colonial dominance. Today, rld warthis is manifested through the attack on the Petrodollar by the BRICS), and a set of entangling alliances which all but guaranteed war if only two parties were in conflict.

There is no shortage of places where the slightest spark could set off World War III, but there are a few leading candidates.

The Tianjin explosion was waged as an act of war by the United States in response to China’s currency war with the subsequent Yuan devaluation, according to dissident sources from mainland China. Within hours, Mike Adams and I had both reached the same conclusion, that the weapon used to attack China was an American space-based weapon fired in retaliation for a recent Chinese currency devaluation which negatively impacted the dollar

A duplicate explosion, like the one at Tianjin, occurred at a chemical warehouse in Shandong province in eastern China on August 22, 2015, the People’s Daily China reported. The site is only one kilometer from a residential area. Firefighters were overwhelmed as they attempted to  deal with the explosion. In the present political climate, and with the MO being identical, how can anyone say that these provocations are connected and were carried out for the exact same reasons?

Please underscore these words, anyone who understands Chinese psychology, knows full well that the Chinese will retaliate in greater force than how they were attacked. The Chinese military is very strategic. Do not expect a knee-jerk Chinese reaction, but you can bet your bottom, soon-to-be worthless dollar, that a massive retaliatory strike is coming.

Earlier this week, North and South Korea exchanged artillery fire. South Korea resumed its propaganda broadcasts across the DMZ and North Korea threatened to use nuclear weapons against the South. What could have been looked at as mere blustering, took a serious turn when North Korea prepared short and medium range missiles and pointed them at Seoul. The US and the South Korean Air Forces responded by buzzing the North Korean side of the DMZ. Here is the report. South Korea and US forces stationed on the Korean peninsula have flown eight combat jets simulating the striking of enemy targets in a show of force against North Korea’s war threats amid the ongoing crisis.

Four F-16 fighter jets from the US and four South Korean F-15k fighters joined together on Saturday “to show off the military might of South Korea and the US combined air force power,” an official from South Korea’s Joint Chiefs of Staff said.

According to the South Korean official, the air warfare group has deliberately taken the flight route that would “alarm North Korea” and show the “allies’ resolute determination”  in retaliation for the provocation, reported Yonhap News.

For this to “mushroom” into a major confrontation would have taken no more than for a North Korean officer to order the firing of a SAM which could have brought down one of these planes. Meanwhile, the propaganda agenda of RT is in full evidence as they are championing the combat readiness of North Korea and their intention to attack the South as evidenced by the following tweet. 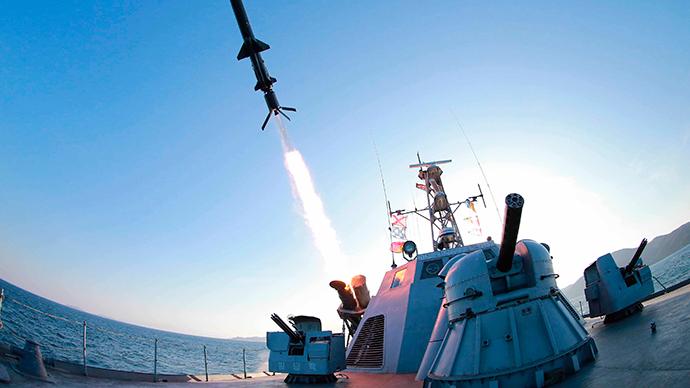 In the following video, China is seen retrofitting thousands of merchant ships for military purposes so they can be used in the event of a war, another disturbing indication of growing tensions between Beijing and Washington. Alex Jones produced and released this video in June.

Mythical Invasion of Taiwan by China

I am receiving reports that Taiwan is being fortified beyond present levels which is not surprising given the recent set of events. Everyone’s World War III scenario has China attacking Taiwan.

Below is a fictional account of a Chinese invasion of Taiwan, supported by Russia and her allies, in the year 2055. The date of this video could easily be changed to 2015. These events are telling and it is frightening to think that we are this close to the invasion of Taiwan becoming a reality.

Earlier this week, Russia moved 50,000 troops to the Ukrainian border. ISIS is still operating in Syria and Putin has repeatedly warned that he will nuke the United States if we invade Syria.

The world is on multiple collision courses with World War III and please remember, it only takes one to begin the holocaust. Realistically, I do not see how the world is going to avoid World War III.

In the next article, I will explore what it would be like to engage Chinese troops and please believe me, that is not what we want to see happen.