US Tests Space Weapon: Back to Star Wars (I)

With public attention centered on other things the United States has been deploying new and more sophisticated weaponry in space. Step by step the Earth’s orbit is becoming primed for war. A growing number of space objects lurk in space and there is a good reason to surmise that they are possibly waiting for commands to disable other satellites and start a star war. The US deploys powerful sea-based Aegis air-defense systems that, with accurate guidance, could reach into orbit to destroy enemy spacecraft.

A war in orbit could wreck the satellites network the world so much relies on.

It has been reported that the US Missile Defense Agency (MDA) is to reboot the concept of Airborne Laser by building a laser-armed aircraft that can shoot down ballistic missiles at the time they are the most vulnerable – just after launch – without having to come close and risk being shot down itself. 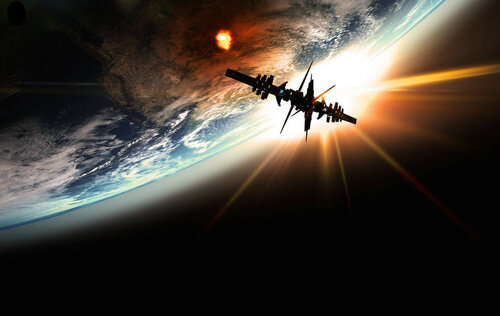 The new idea is a high-altitude, long-endurance drone armed with a more compact electrically powered laser. According to the plans, a «low-power laser demonstrator» will fly circa 2021. The experiments include Reaper and Phantom Eye aerial vehicles. According to Missile Defense Agency, in a successful 2010 test an air borne laser shot down a ballistic missile «tens of kilometers» away using about a megawatt of power. According to Breaking Defense, a drone can stay aloft for 24 hours or more. An electric laser can keep firing as long as the aircraft’s generators are running. A mid-air refueling both keeps the drone flying and «reloads» its ability to generate power for the laser. The combination of unmanned endurance and unlimited shots means a single drone could stay on station for days, instead of needing multiple manned aircraft to come and go in rotation. An electrical laser can dial its power up and down for different targets at different ranges. That would let the laser serve double duty, protecting the drone carrying it against enemy fighters and anti-aircraft missile. It might even shoot down at a distance, without having to wait to be attacked. According to Missile Defense Agency director Vice Admiral James Syring, MDA will conduct experiments and review alternatives until 2018-2019, when Syring said it will pick «which technologies we think have the most promise.» When the full-power system will enter service is an open question.

US weaponization programs under way

Air borne laser is not the only thing in the US inventory. The United States continues to invest in programs that could provide anti-satellite and space-based weapons capabilities. In July 2010, the Obama administration released the new US National Space Policy. It states: «The United States remains committed to the use of space systems in support of its national and homeland security. The United States will invest in space situational awareness capabilities and launch vehicle technologies; develop the means to assure mission essential functions enabled by space; enhance our ability to identify and characterize threats; and deter, defend, and if necessary, defeat efforts to interfere with or attack U.S. or allied space systems»

The new policy also notes that the US will consider proposals and concepts for arms control measures if they are «equitable, effectively verifiable, and enhance the national security of the US and its allies.» According to US, the Russian-Chinese joint draft treaty on the Prevention of the Placement of Weapons in Outer Space (PPWT) would not meet these criteria, as it is «fundamentally flawed» and would not provide any grounds for commencing negotiations. Somehow the United States has failed to come with any initiative of its own so far, giving priority to continuing space militarization.

The U.S. Air Force’s unmanned X-37B space plane has flown four secret missions to Earth orbit to date since 2010 each time carrying a mystery payload. X-37B space plane is a maneuverable, reusable, space test platform which boosts into low orbit – around 250 miles high – atop a rocket but lands back on Earth like an airplane. The two X-37Bs take turns spending a year or more in orbit. The project’s total cost is unknown because the budget has been classified since the X-37B project was transferred to The Defense Advanced Research Projects Agency (DARPA). It’s almost certainly a spy plane, or, at least, a testbed for space surveillance gear and a launch platform for miniature spy satellites. The vehicle’s payload is enough to accommodate some spy equipment like cameras and sensors. The vehicle has no docking hatch, so it cannot be used for small-size deliveries to the ISS or any other orbital station. It was also called a testing model for a future «space bomber» that will be able to destroy targets from the orbit. Some question whether the X-37B itself might be a delivery system for a nuclear bomb – whether the spaceship is intended to re-enter Earth’s atmosphere on autopilot and dive-bomb an enemy target.

According to Dave Webb, chairman of the Global Network Against Weapons Nuclear Power in Space, the X-37B «is part of the Pentagon’s effort to develop the capability to strike anywhere in the world with a conventional warhead in less than an hour», known as Prompt Global Strike.

Commenting on the fourth launch this May Laura Grego, senior scientist at the Global Security Program for the Union of Concerned Scientists, said: «We should certainly be concerned about the weaponization of space. In any case, security in space cannot be achieved unilaterally or by developing the best weapons. It really depends on sustained and substantial cooperation among users».

The altitudes used for military and exploration purposes today range from 0 to 20 km and from 140 km up. There is a void to be filled in between that is considered a potential theater of warfare. The X-37 is clearly aimed to fill the void «from above», while the X-51 (also known as X-51 Wave Rider) does it «from bellow». X-51 is an unmanned scramjet demonstration aircraft for hypersonic (Mach 6, approximately 4,000 miles per hour (6,400 km/h at altitude) flight-testing. In flight demonstrations, the X-51 is carried by a B-52 to an altitude of about 50,000 feet (15.2 kilometers) and then released over the ocean. The program is managed by US Air Force. The craft successfully completed its first powered flight in May 2010 and also achieved the longest duration flight at speeds over Mach 5.