A Brief History Of Politicians Being Compared To Adolf Hitler 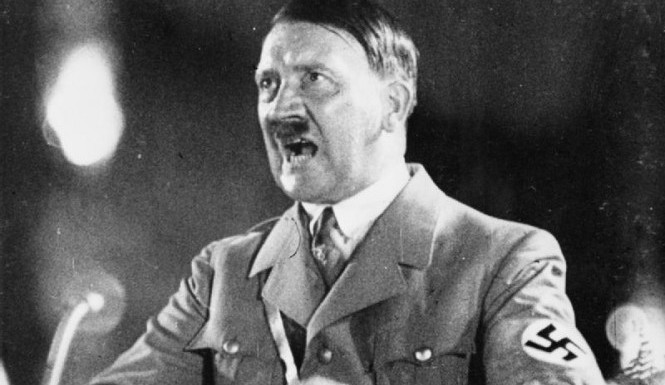 When one politician disagrees with another, what better way to voice your displeasure with them than comparing them to former Nazi leader Adolf Hitler?

It seems to be the go-to insult, and on Monday, Rep. Randy Weber, R-Texas, was the latest to bring Hitler into the mix. This time, it came via Twitter, and the subject was the Obama administration’s failure to have a high-level official at the weekend’s Unity March in Paris. 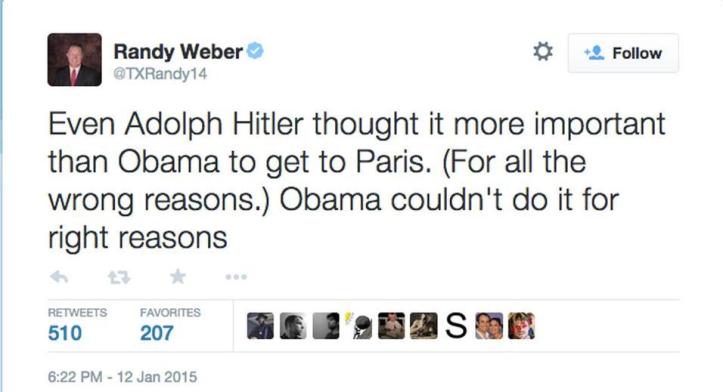 Weber was referring to the time when Adolf (not Adolph) Hitler visited Paris in 1940 after Germany’s Nazi forces took over France.

Earlier in the day, the White House said it should have sent someone, and this week, Secretary of State John Kerry will be heading to France.

On Tuesday, Democrats lashed out at Weber.

“Congressional Republicans like Weber are clearly catering to the most extreme elements – first refusing to condemn Steve Scalise’s inexcusable affiliation with KKK members, and now this,” said Josh Schwerin, spokesman for the Democratic Congressional Campaign Committee, according to the Associated Press. “Speaker (John) Boehner and Republican leaders need to step forward and condemn Congressman Weber and his toxic brand of politics.”

After getting significant backlash on Twitter, Weber offered an apology on Tuesday, saying “it was not my intention to trivialize the Holocaust nor to compare the President to Adolf Hitler.”

I need to first apologize to all those offended by my tweet… http://t.co/ZQ612AtonU

It’s certainly not the first time — and most likely won’t be the last time — a politician has used a Hitler comparison.

According to local media, the educator at McKinley Middle School sent students home with a Venn diagram as part of a class project. It included instructions to compare and contrast Hitler and Bush, stating that “both men abused their powers.”

The former Secretary of State did it at a private event for the Boys and Girls Club of Long Beach, saying Putin’s effort to protect Russians in Ukraine is similar to Hitler protecting ethnic Germans outside of Germany.

“Now if this sounds familiar, it’s what Hitler did back in the 30s,” she said. “All the Germans that were … the ethnic Germans, the Germans by ancestry who were in places like Czechoslovakia and Romania and other places, Hitler kept saying they’re not being treated right. I must go and protect my people and that’s what’s gotten everybody so nervous.”

In 2010, Georgia’s Republican State Rep. John Yates said illegal immigrants are like Hitler and should be shot, because like Hitler, they’re enemies of the United States.
“Stopping Hitler was worth the price,” he said. “It’s our border, they’re invading us.”

The topic came up in 2002, when discussing Bush’s tactics in Iraq.

Libyan leader Muammar Gaddafi went there in 2011, after U.S., British, and French forces launched air strikes against him.

”We defeated Italy when it was a superpower like you,” he said, comparing Washington to Rome, Libya’s former colonizer. “You will be defeated like Hitler and Mussolini … You are the new Hitler.” He brought up America’s defeats in Vietnam and its self-debilitating invasion of Iraq. He raised the image of Osama bin Laden, “that weak man” who he said defeated the U.S. “We will be victorious. You will die.”

This one came again after a 1986 bombing in Libya, but was from Cuban President Fidel Castro, saying Reagan was “as unscrupulous and as irresponsible as Hitler.”

“In a sense, Reagan is potentially more dangerous than the German Nazi leader because he has a much more powerful military arsenal at his disposal, including nuclear weapons,” Castro said.