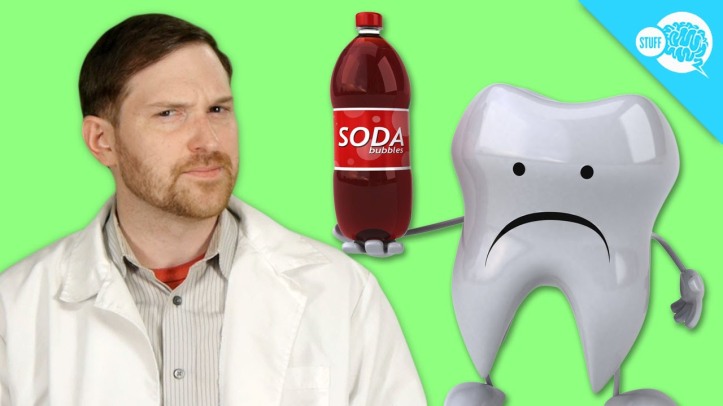 A study conducted by the Philadelphia Temple University concluded that diet soda can destroy a person’s teeth to the extent that they resemble someone who has chronically abused crack cocaine or methamphetamines.

Four adults were observed. One woman who consumed 2 liters of diet soda per day for 3 to 5 years; a young man who had been addicted to meth for 3 years; and another person who had had a crack cocaine addiction for 18 years.

Mohamed Bassioumy, lead author of the study said that all participants had comparable tooth decay due to exposure to acids that caused erosion.

Bassioumy asserted : “You look at it side-to-side with ‘meth mouth’ or ‘coke mouth’, it is startling to see the intensity and extent of damage more or less the same.”

The citric acid in soda eats away at tooth enamel, exposing nerves inside the teeth. The same components in illegal drugs are found in diet soda; which explains why the destruction to the teeth are identical.

Whether the soda is sweetened or not, the citric and phosphoric acids in diet soda mimic the effects of meth or crack cocaine.

Bassioumy said: “The meth user, however, also consumed two or three cans of regular soda a day because the drugs made his mouth dry, and the crack addict has been a regular crack user for 18 years, nearly four times as long as the soda drinker had been consuming excessive amounts of soda.”

The manifestation of the damage caused by acids in soda include:

A representative from the American Beverage Association (ABA), a lobby and advocacy group for soda manufacturers says : “The woman referenced in this article did not receive dental health services for more than 20 years — two-thirds of her life. To single out diet soda consumption as the unique factor in her tooth decay and erosion — and to compare it to that from illicit drug use — is irresponsible.”

General dental hygiene habits aside, Bassioumy asserts that he “was trying to make a parallel between drug abusers — and the usual neglect for themselves — and put this with the same traits of someone who drinks diet soda.”

Eugene Antenucci, spokesman for the DDS, FAGD and AGD explained that dental patients should be advised to chew sugar-free gum, drink more water or just rinse their mouth out after consuming diet soda.

Antenucci said: “Both tactics increase saliva flow, which naturally helps to return the acidity levels in the mouth to normal.”

Dr. Peter Aldritt, chair of the Oral Health Committee (OHC) said that “the acid [in soda] causes the enamel to dissolve away. If you open a can of soft drink and consume it in two minutes, you will have one huge acid attack on your teeth. But if you took the can and sat sipping it for four hours, that is more damaging because you are exposing your teeth to the acid for four hours.”

Aldritt continued to explain: “After you have had an acidic attack on the teeth, the enamel remains softer for 30 minutes and your toothbrush is going to damage the enamel. Wait a minimum of 30 or 60 minutes. By this stage, the saliva helps to neutralize the acid and the enamel becomes harder. Swishing some water around your mouth is a better thing to do after drinking something acidic.”

The Food and Drug Administration (FDA) was deemed generally safe in 1958. During the 1970s, BVO was restricted in its use as a food additive with a concentration of 15ppm. The FDA said that BVO is an interim food additive in the US and completely permissible in Canada. BVO has been banned in Japan and India while the European Union has not approved the substance for human use.

After the FDA approved BVO for use in products, adverse effects began to be reported. Reactions to the chemical include:

BVO is also used by soft drink corporations to keep the carbonated drinks from becoming combustible.
Currently, BVO is used in many brand name soft drink products such as PepsiCo Gatorade and Mountain Dew; but also found in Coca-Cola soft drinks such as Powerade, Fanta Orange and Fresca; and Sunkist Peach Soda produced by Dr. Pepper Snapple Group.

BVO will be replaced with sucrose acetate isobutyrate which is considered “generally safe” as a food additive by the FDA.

PepsiCo has decided that aspartame, a neuro-toxin used in their diet cola products as a sweetener, is not “sweet enough” and are “testing a new mix of artificial sweeteners” that will retain its potency longer than high fructose corn syrup.

The new mixture of sweeteners being tested includes acesulfame-potassium, or ace-K. The problem PepsiCo has with aspartame is that it is affected negatively in warm conditions that occur during shipping before their soda products arrive in retail stores.

In 1998, the FDA approved the use of ace-K despite its known safety dangers. This chemical is most popularly used in baked goods, chewing gum and gelatin desserts according to the food safety advocacy group, the Center for Science in the Public Interest.

Ace-K, or acesulfame potassium , is a lab-created chemical that is 200 times sweeter than sucrose. Ace-K is suspected through research to have carcinogenic properties, yet this studied fact was dismissed and further studies were not conducted prior to the FDA approval.

In testing preformed on rats, ace-K was shown to stimulate dose-dependent insulin secretion. In further studies , ace-K provided more of a danger to male rats, than female rats with regard to their signal toward being cancer producing.