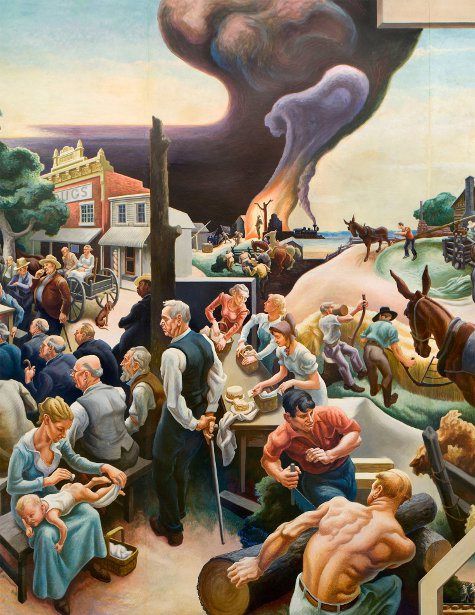 Detail of A Social History of the State of Missouri by Thomas Hart Benton. (Getty Images / John Elk)

Recent political debate in the United States and other advanced capitalist democracies has been dominated by two issues: the rise of economic inequality and the scale of government intervention to address it. As the 2012 U.S. presidential election and the battles over the “fiscal cliff” have demonstrated, the central focus of the left today is on increasing government taxing and spending, primarily to reverse the growing stratification of society, whereas the central focus of the right is on decreasing taxing and spending, primarily to ensure economic dynamism. Each side minimizes the concerns of the other, and each seems to believe that its desired policies are sufficient to ensure prosperity and social stability. Both are wrong.

Inequality is indeed increasing almost everywhere in the postindustrial capitalist world. But despite what many on the left think, this is not the result of politics, nor is politics likely to reverse it, for the problem is more deeply rooted and intractable than generally recognized. Inequality is an inevitable product of capitalist activity, and expanding equality of opportunity only increases it — because some individuals and communities are simply better able than others to exploit the opportunities for development and advancement that capitalism affords. Despite what many on the right think, however, this is a problem for everybody, not just those who are doing poorly or those who are ideologically committed to egalitarianism — because if left unaddressed, rising inequality and economic insecurity can erode social order and generate a populist backlash against the capitalist system at large.

Over the last few centuries, the spread of capitalism has generated a phenomenal leap in human progress, leading to both previously unimaginable increases in material living standards and the unprecedented cultivation of all kinds of human potential. Capitalism’s intrinsic dynamism, however, produces insecurity along with benefits, and so its advance has always met resistance. Much of the political and institutional history of capitalist societies, in fact, has been the record of attempts to ease or cushion that insecurity, and it was only the creation of the modern welfare state in the middle of the twentieth century that finally enabled capitalism and democracy to coexist in relative harmony.

In recent decades, developments in technology, finance, and international trade have generated new waves and forms of insecurity for leading capitalist economies, making life increasingly unequal and chancier for not only the lower and working classes but much of the middle class as well. The right has largely ignored the problem, while the left has sought to eliminate it through government action, regardless of the costs. Neither approach is viable in the long run. Contemporary capitalist polities need to accept that inequality and insecurity will continue to be the inevitable result of market operations and find ways to shield citizens from their consequences — while somehow still preserving the dynamism that produces capitalism’s vast economic and cultural benefits in the first place.

Capitalism is a system of economic and social relations marked by private property, the exchange of goods and services by free individuals, and the use of market mechanisms to control the production and distribution of those goods and services. Some of its elements have existed in human societies for ages, but it was only in the seventeenth and eighteenth centuries, in parts of Europe and its offshoots in North America, that they all came together in force. Throughout history, most households had consumed most of the things that they produced and produced most of what they consumed. Only at this point did a majority of the population in some countries begin to buy most of the things they consumed and do so with the proceeds gained from selling most of what they produced.

The growth of market-oriented households and what came to be called “commercial society” had profound implications for practically every aspect of human activity. Prior to capitalism, life was governed by traditional institutions that subordinated the choices and destinies of individuals to various communal, political, and religious structures. These institutions kept change to a minimum, blocking people from making much progress but also protecting them from many of life’s vicissitudes. The advent of capitalism gave individuals more control over and responsibility for their own lives than ever before — which proved both liberating and terrifying, allowing for both progress and regression.