In the past I have often tried to take a big picture approach to the issues facing the American public and how there is almost always a deeper connection between a variety of political and economic events. And, what has become increasingly clear to me is that in order to understand government actions and geopolitics, you must always ask yourself “Who benefits?”

The bottom line is this – At the heart of nearly every conflict and every crisis the same group of power mongers usually benefits, and they have taken a keen interest in the climate change narrative in particular. But like I said, this is the big picture. Right now I’d like to take a look at a relatively small issue and how the little dominoes lead up to a bigger con game and a bigger disaster. Let’s talk about gas stoves…

Frankly, I don’t care about what my stove uses to cook with as long as it works. That said, around 38% of US households use natural gas for cooking and heating. That’s a significant percentage of people that rely on gas based energy for their daily needs. Here’s the problem, though – Natural gas is not politically correct these days. Nearly all carbon emitting energy sources have been marked by climate activists and western governments as a threat that needs to be erased between 2030 to 2050.

Globalist institutions and climate change grifters have put natural gas on the naughty list, but there are a couple of realities that must be addressed. First, as noted, a vast portion of the western world including the US and Europe rely on natural gas for numerous energy applications. Ban natural gas and civilization faces an immediate plunge in economic activity, as well as much higher prices on all remaining energy sources due to increasing demand. There is NO green energy solution that can fill the same roll as gas.

All you have to do is look at Europe and the UK today and see how they are struggling with vastly higher costs due to sanctions on Russian gas exports. It’s a mess, and they are lucky that the winter has so far been rather mild, because the moment things freeze, they are in trouble. There are not enough alternative energy resources available to fulfill Europe’s shortages if the temperatures plummet.

But what does this have to do with banning gas stoves in the US? Isn’t that a health issue rather than an environmental issue? No, it’s not a health issue, it’s a climate agenda issue being rebranded as a health issue.

There has been a coordinated government and media blitz on the gas stove narrative this week, with an avalanche of claims that natural gas causes everything from asthma in children to a slowdown in cognitive development. What is the evidence for these claims? The Biden Administration and the agency weighing a potential ban, the Consumer Product Safety Commission (CPSC), have not given specific sources yet.

The assertions are most likely rooted in a single study published in December by the International Journal of Environmental Research and Public Health in December. The group is privately funded and this particular study on gas stoves was led by RMI, a non-profit research entity that advocates for aggressive green policies and works to “transform global energy systems across the real economy.” The two lead authors, Talor Gruenwald and Brady Seals, are RMI researchers who have contributed to the group’s “carbon-free buildings” initiative.

In other words, the study is written by people with a built in bias, and since science these days is now being linked to activism, no single study funded by a private ideological group can be trusted. RMI is not only part of the climate cult, they also promote “equity” theory and general woke politics. These concepts and real science cannot coexist.

The American Gas Association made this exact point in a responding statement, noting that the study’s testing did not include real life appliance usage, and:

“Ignored [previous] literature, including one study of data collected from more than 500,000 children in 47 countries that ‘detected no evidence’ of an association between the use of gas as a cooking fuel and either asthma symptoms or asthma diagnosis.”

The push for a gas stove ban is not about health, it’s about control. It is an attempt to falsely link carbon emissions and energy products to negative health concerns as a way to trick the public into supporting decarbonization out of fear. But why revert to such a strategy? Is the climate cult really that desperate?

Yes, yes they are.

You see, the truth about climate change is beginning to spread to the masses, and the debunking of anti-carbon propaganda is picking up momentum. Here are the facts:

The average global temperature is not climbing to dangerous levels. The Earth’s temps have increased according to the NOAA by less than 1°C in the past century.

There is no evidence that this kind of temperature increase represents a threat to the environment or human health. In fact, the Earth’s temps have been much higher than they are today multiple times in the Earth’s history long before man-made carbon emissions were a thing. The official temperature record used by climate scientists only goes back to the 1880s – That is a TINY sliver of time in comparison to the epic lifespan of the Earth’s atmosphere.

And what about all those arguments that there are more dangerous weather patterns emerging due to global warming? That’s a lie. There is no significant difference between storm patterns today compared to 100 years ago. 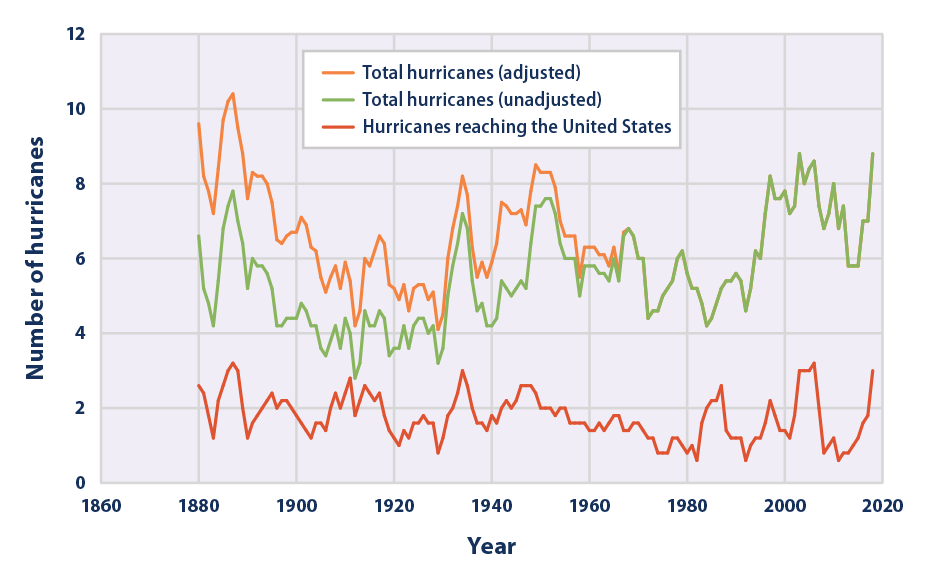 And let’s not forget that global warming propaganda has been going on a long time now. Back when I was a kid in the 1980s, they used to tell us in school that large parts of continents would be under water by the year 2000. This obviously never happened and likely never will. Many of us who grew up in that era are still waiting around for the icecaps to melt. 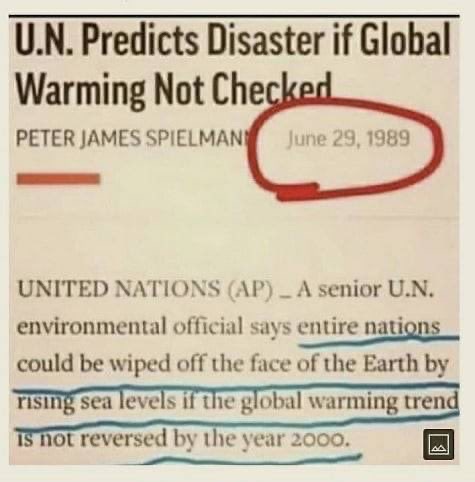 The climate change agenda is about giving governments and globalist institutions the power to bottleneck energy usage, tax carbon emissions and thus control almost every aspect of our daily lives. Without the free flow of carbon based energy almost all industry will collapse. Green energy is inefficient and cannot fill the void left behind by gas, petroleum and coal. All that would be left is a minimal manufacturing base, minimal food production and a shrinking human population. Those that survive would be slaves to carbon restrictions; it would be a living nightmare.

There are very rich and powerful people out there that greatly benefit from such a scenario.

The globalists have been scheming to use environmentalism as an excuse for centralization since at least 1972, when the Club Of Rome, a think-tank attached to the UN, published a treatise titled ‘The Limits To Growth’. Twenty years later they would publish a book titled ‘The First Global Revolution.’ In that document they specifically recommend using global warming as a vehicle:

“In searching for a common enemy against whom we can unite, we came up with the idea that pollution, the threat of global warming, water shortages, famine and the like, would fit the bill. In their totality and their interactions these phenomena do constitute a common threat which must be confronted by everyone together. But in designating these dangers as the enemy, we fall into the trap, which we have already warned readers about, namely mistaking symptoms for causes. All these dangers are caused by human intervention in natural processes, and it is only through changed attitudes and behaviour that they can be overcome. The real enemy then is humanity itself.”

The statement comes from Chapter 5 – The Vacuum, which covers their desire for global government. The quote is relatively clear; a common enemy must be conjured in order to trick humanity into uniting under a single banner – The globalist banner. And the elites see environmental catastrophe, caused by mankind itself, as the best possible motivator.

How does this agenda start? It starts with gas stoves. It starts with something we might see as small, and then it grows from there. Pretty soon, they will be banning natural gas for heating. They will ban wood stoves. They will artificially induce gas price inflation. Then they will implement carbon taxation on manufacturers which will in turn cause prices to rise for consumers. Then there will be carbon taxes for the average individual. They will use whatever means at their disposal to make it impossible to use “fossil fuels.”

Again, it’s not about health, it’s about control. It’s always about control. The gas stove issue is a fraud; one domino in a long chain that leads to carbon totalitarianism.