The Secret Racist History of the Democratic Party

Have you heard of Josiah Walls or Hiram Rhodes Revels?  How about Joseph Hayne Rainey?  If not, you’re not alone.  I taught history and I never knew half of our nation’s past until I began to re-educate myself by learning from original source materials, rather than modern textbooks written by progressive Democrats with an agenda.

Interestingly, Democrats have long ago erased these historic figures from our textbooks, only to offer deceitful propaganda and economic enticements in an effort to convince people, especially black Americans, that it’s the Democrats rather than Republicans who are the true saviors of civil liberties.  Luckily, we can still venture back into America’s real historical record to find that facts are stubborn things.  Let’s take a closer look.

An 1872 print by Currier and Ives depicts the first seven black Americans elected to the U.S. Congress during the Reconstruction period of 1865 to 1877– and they’re all Republican!

From left to right: 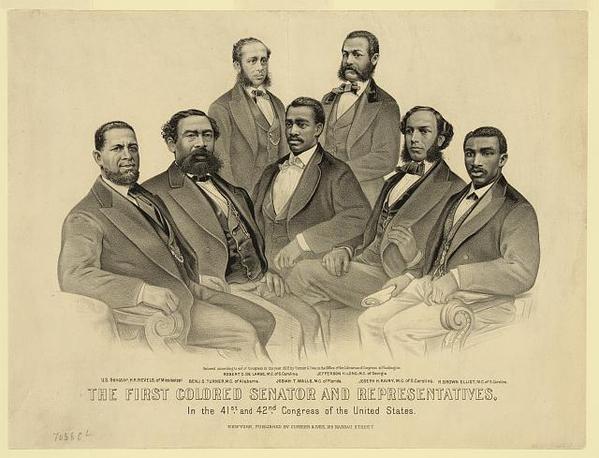 Clearly, the latter half of the 19th Century, and for much of the early half of the 20th Century, it was the Republican Party that was the party of choice for blacks. How can this be? Because the Republican Party was formed in the late 1850s as an oppositional force to the pro-slavery Democratic Party.  Republicans wanted to return to the principles that were originally established in the republic’s founding documents and in doing so became the first party to openly advocated strong civil rights legislation.  Voters took notice and in 1860 Abraham Lincoln was elected President along with a Republican Congress.  This infuriated the southern Democrats, who soon afterwards left Congress and took their states with them to form what officially became known as The Slaveholding Confederate States of America.

In spite of this, in almost every Southern state, the Republican Party was actually formed by blacks, not whites. Case in point is Houston, Texas, where 150 blacks and 20 whites created the Republican Party of Texas. But perhaps most telling of all with respect to the Republican Party’s achievements is that black men were continuously elected to public office.  For example, 42 blacks were elected to the Texas legislature, 112 in Mississippi, 190 in South Carolina, 95 representatives and 32 senators in Louisiana, and many more elected in other states — all Republican. Democrats didn’t elect their first black American to the U.S. House until 1935!

By the mid-1860s, the Republican Party’s alliance with blacks had caused a noticeable strain on the Democrats’ struggle for electoral significance in the post-Civil War era.  This prompted the Democratic Party in 1866 to develop a new pseudo-secret political action group whose sole purpose was to help gain control of the electorate.  The new group was known simply by their initials, KKK (Ku Klux Klan).

This political relationship was nationally solidified shortly thereafter during the 1868 Democratic National Convention when former Civil War General Nathan Bedford Forrest was honored as the KKK’s first Grand Wizard.  But don’t bother checking the Democratic National Committee’s website for proof.  For many years, even up through the 2012 Presidential Election, the DNC had omitted all related history from 1848 to 1900 from their timeline — half a century worth! Now, for the 2016 election cycle, they’ve scratched even more history.  Apparently, they believe it’s easier to just lie and claim to have fought for civil rights for over 200 hundred years, while seeing fit to list only a select few distorted events as exemplary, beginning as late as the 1920s.  Incredibly, the DNC conveniently jumps past more than 100 years of American history!

Nevertheless, this sordid history is still well documented.  There’s even a thirteen-volume set of Congressional investigations dating from 1872 detailing the Klan’s connection to the   Democratic Party.  The official documents, titled Report of the Joint Select Committee to Inquire Into the Condition of Affairs in the Late Insurrectionary States, irrefutably proves the KKK’s prominent role in the Democratic Party.

One of the most vivid examples of collusion between the KKK and Democratic Party was when Democrat Senator Wade Hampton ran for the governorship of South Carolina in 1876.  The Klan put into action a battle plan to help Democrats win, stating: “Every Democrat must feel honor bound to control the vote of at least one Negro by intimidation….  Democrats must go in as large numbers…and well-armed.”  An issue of Harper’s Weekly that same year illustrated this mindset with a depiction of two white Democrats standing next to a black man while pointing a gun at him.  At the bottom of the depiction is a caption that reads: “Of Course He Wants To Vote The Democratic Ticket!” 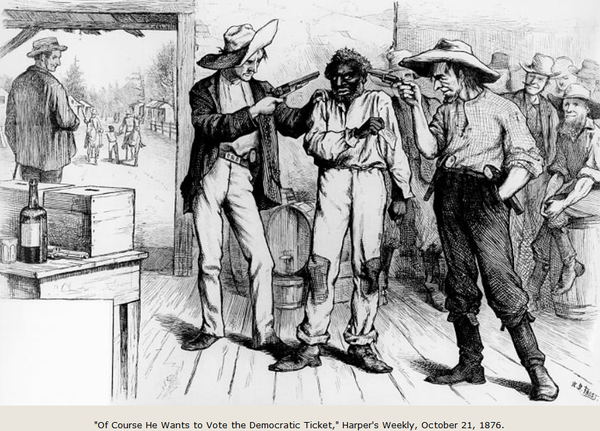 This is reminiscent of the 2008 Presidential election when members of the New Black Panther Party hung out at a Philadelphia precinct wielding big batons. 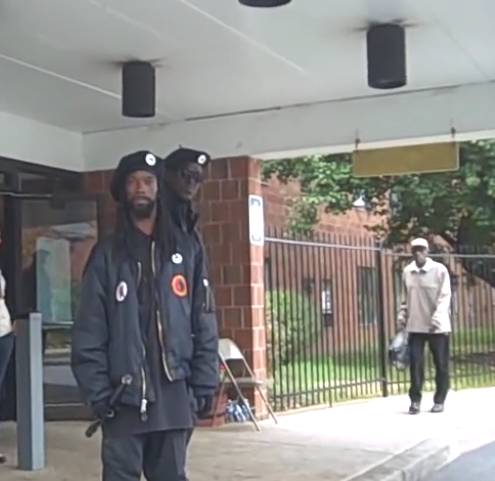 The Klan’s primary mission was to intimidate Republicans — black and white. In South Carolina, for example, the Klan even passed out “push cards” — a hit list of 63 (50 blacks and 13 whites) “Radicals” of the legislature pictured on one side and their names listed on the other.  Democrats called Republicans radicals not just because they were a powerful political force, but because they allowed blacks to participate in the political process.  Apparently, this was all too much for Democrats to bear.

There were also lynchings, but not what you might think. According to the University of Missouri-Kansas City School of Law, between 1882 and 1964 an estimated 3,446 blacks and 1,279 whites were lynched at the hands of the Klan.

Today, the Democratic Party no longer needs the help of political gangs wearing pointy hoods to do their dirty work.  Instead, they do it themselves.  You may recall the case of black Tea Party activist Kenneth Gladney, who was brutally beaten by two SEIU members during a 2009 health care town hall meeting. In February 2011, a union thug with Communications Workers of America was caught on tape physically assaulting a young female FreedomWorks activist in Washington, DC. Then in 2012, Michigan Education Association President Steve Cook jumped on the protest bandwagon against the state’s new right-to-work legislation stating, “Whoever votes for this is not going to have any peace for the next two years.”  An even worse threat was issued on the floor of the Michigan House of Representatives the next day by Democratic Representative Douglas Geiss who charged, “There will be blood!”

As we forge ahead into this critical 2016 election season, let us not forget the real history of America when blacks and whites, primarily Republicans, worked side by side defending the rights and dignity of all Americans. It’s a history that has been kept out of the history books–a history that today’s Democrats routinely lie about while promptly pointing their finger at Republicans, calling white Republicans racists and black Republicans Uncle Toms.  This is because Democrats have a secret past that must be protected and an agenda that must be fulfilled.  If history is any indication of what the future might hold, brace yourself.  There will be some in the Democratic Party who will be prepared to do whatever it takes to silence any opposition.