The following statement was sent to me and other members of the medical staff at a local hospital in October 2021 by its Executive Committee after approval at a Medical Staff meeting:

“In early September, the Federation of State Medical Boards, as well as the American Board of Family Medicine, American Board of Internal Medicine, and American Board of Pediatrics, issued a statement about vaccine misinformation.  They stated that providing misinformation about the Covid-19 vaccine contradicts physicians’ ethical and professional responsibilities, and therefore may subject a physician to disciplinary action, including suspension or revocation of their medical license.

In support of this position, the Medical Staff voted to issue the following statement:

We believe that distribution of COVID-19 vaccine misinformation by a physician or advance practice provider via any means is contrary to the known science and the best interests of patients.  Such conduct is also inconsistent with our standard and those practitioners may be subject to Medical Staff action….”

It is no small thing to imperil a physician’s livelihood, practice, medical license, and family over differences of opinion regarding optimal treatment for a particular condition.  That, however, is precisely what this particular hospital has done.  Specifically, they threatened physicians with “disciplinary action including suspension or revocation of their medical license” for the crime of “[distributing]… Covid-19 vaccine misinformation.”

There are intense debates surrounding the vaccine, its efficacy, how long the immunity lasts — particularly as the virus evolves — its experimental nature, its “Emergency Use Authorization,” and its serious side effects and adverse reactions, including death, that have been well documented.  Many who have already been vaccinated still contract and spread the virus and fall ill from it.  Tens of millions of Americans, previously infected, have “natural immunity,” which is far broader and more durable, and do not require the vaccine.  The recovery rate for patients under seventy and in good health is 99.95%, better than the flu, and many choose not to get the vaccine for varying reasons, including risk-benefit analysis, concerns over potential complications, religious and medical objections, or personal choice.  Patients under age 18 have far more risk from the vaccine than from COVID, for example.  There have been some 17,000 deaths attributable to the vaccine, of all ages, but many believe that the numbers are much higher, even as much as 150,000, along with other serious complications such as thromboembolic phenomena, myo-endo-pericarditis, menstrual irregularities, stroke, myocardial infarction, and others.

Further, the various vaccines are not “vaccines” as commonly understood but “gene therapy,” mRNA platforms that insert themselves into our DNA.  They then harness our own cellular machinery to produce the infamous “spike protein” to be distributed throughout the body eliciting the immune response, but sometimes with devastating consequences, as we have learned.  A vaccine generally takes four-six years of development before being released.  The COVID vaccine coming out in just a few months meant bypassing the usual safeguards that serve to protect the public before a new drug or vaccine is brought to market.  Further, the principle of “bodily integrity” or “bodily autonomy,” or the right to do what we wish with our bodies (within reason), is settled law in this country based on a number of Supreme Court decisions, including Cruzan, Griswold, Casey, Loving, Roe, and others.  Beyond that, the right to one’s own “personhood,” the right to the possession and control of one’s own body and person, free of restraint or interference, including the right to choose not to receive a medicine or vaccine, is as foundational as the right to life, liberty, and the pursuit of happiness.  The right to self-govern and the freedom to choose is implied in our Constitution and, hence, a constitutional right.  Beyond that, it is a God-given, natural right.

There is also much discussion about the optimal treatment for COVID, the use of therapeutics, and the questionable logic of mass vaccination, particularly, of a “leaky” vaccine, in the teeth of a pandemic.  Such an approach may select out for a “super bug,” highly transmissible, that easily evades the uniform and less robust immunity derived from the COVID vaccine.  Science evolves swiftly as new 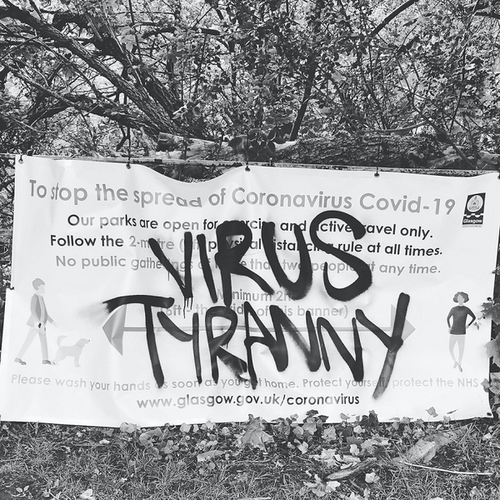 data and research arrive, even on a daily basis.  What may be “science” or “truth” one day may be found incorrect and false the next.  Further, the issue of COVID, lockdowns, school closures, masks, and the vaccine itself have become heavily politicized.  “Science” has been harnessed in some quarters to pursue a particular political agenda; hence, it is not “science” so much as “political science.”

All of this raises the question: What, exactly, is “misinformation”? Who decides, and who is responsible for “distributing” it?  We may, with time, be surprised at the answers to these questions.  Perhaps, we will find that it is the large pharmaceutical companies and their allies in government, the media, and elsewhere?  Is this essay “misinformation?”  Will my privileges and license be revoked for writing it?

This “statement” threatens and intimidates those who may disagree with the received wisdom from the public health and medical establishment.  It silences free and open debate regarding best practices for COVID, including the use of the vaccine, even when there is legitimate disagreement.  It chills honest discussion and sincere, worthwhile professional exchange and differences of opinion. This “statement” suppresses healthy skepticism, discourages counterargument, and quashes dissent, critical in a free society and for the scientific enterprise.  It leads to outright censorship and intimidation of authentic interlocutors who differ in their medical opinions.  It represents, therefore, an attack on free speech and our First Amendment.  It is an assault, as well, on reasonable scientific inquiry and examination.  It is, in a word, tyranny.

Hence, it is unwise, unsound, and unscientific.  It is also unconstitutional and un-American.  It is unworthy of the medical profession, the scientific process, and this great nation.  It should be repealed immediately.

I communicated in writing these identical sentiments with the president and other members of the medical staff, executive committee, executive team, and board of directors.  There has been no response, nor did I expect one.  They have already indicted themselves with their “statement.”  They are complicit with evil and unlikely to alter their position.

The public health and medical establishment and their allies in government and the media have done horrendous harm to the nation with 19 months of “misinformation” and disastrous policies, including the lockdowns, school closures, quarantining, and mask and other mandates, none of which had any effect on the trajectory of the virus.  Instead, they have inflicted enormous collateral damage on society far worse than the virus itself.  The medical establishment has refused to recommend or offer early treatment and therapeutics, sacrificing tens of thousands of lives that could have been saved.  Now, they push a very questionable and experimental “vaccine” upon the nation including children who have little risk from the virus.  They have regrettably subsumed themselves to the interests of pharmaceutical companies and others.

History will judge this to be medicine’s darkest hour. It will rank among the worst of medical atrocities.  What is telling and tragic is that the rot has spread not only to its medicine’s commanding institutions, but to local hospitals and medical staffs.  But a Medical Freedom movement that rejects such tyranny and actual “misinformation” is forming.

Richard Moss, M.D., a board-certified surgeon, was a candidate for Congress in 2016 and 2018. He has written “A Surgeon’s Odyssey” and “Matilda’s Triumph,” available on amazon.com.  Contact him at richardmossmd.com or Richard Moss, M.D. on Facebook, YouTube, Rumble, Twitter, Parler, Gab, Gettr, and Instagram.