Are the Good Times Over for Biden? 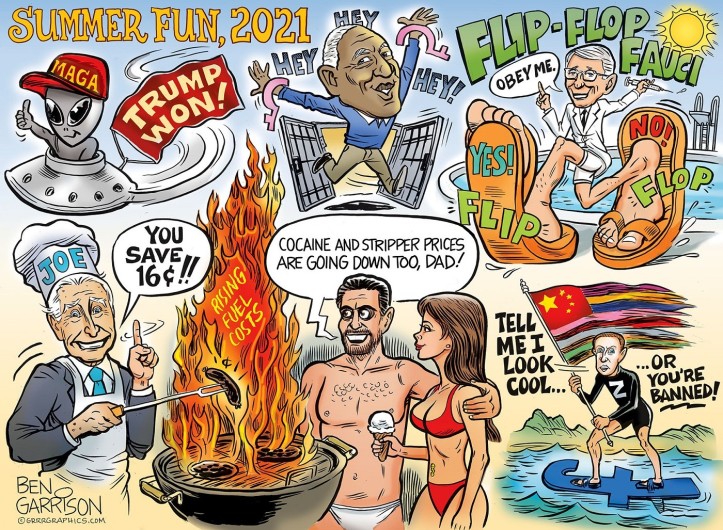 If the Democratic Party goes into the election of 2022 defending Biden’s border failures, decrying rogue cops rather than addressing the shootings and killings, and explaining away inflation and rising interest rates as “not our fault,” the result would seem to be foreordained. Then there is the matter of race…

Are the Democrats headed for their Little Bighorn, with President Joe Biden as Col. Custer? The wish, you suggest, is father to the thought. Yet, consider.

Three vaccines, with excellent efficacy rates, had been created and were being administered at a rate of a million shots a day. The pandemic was at its peak but looking certain to turn down, and it did.

This welcome news lifted national spirits, and the economy with it.

And the new president was taking office in a brief era of good feelings produced by the departure of the party and president who had given us the Jan. 6 Capitol riot.

Thus did Biden begin his administration with his approval at a level his predecessor never reached in any year of his presidency.

But now the storm clouds are gathering and rumbling.

By last week, Biden’s disapproval rating had risen into the 40s, and half the country believed America was “on the wrong track.”

Yet it is not what has happened but what impends that appears ominous for Biden’s and his party’s prospects.

With not quite 70% of U.S. adults having received a vaccination, a new and more contagious delta variant of the disease is spreading worldwide, and an uptick in new U.S. infections has been reported.

In the economy, with markets at an all-time high, an old demon has reappeared. Writes today’s Wall Street Journal:

“Americans should brace themselves for several years of higher inflation than they’ve seen in decades, according to economists who expect the robust post-pandemic economic recovery to fuel brisk price increases …

“If the economists prove correct, Federal Reserve officials might have to raise (interest) rates sooner or more than they expect to keep inflation under control.”

Inflation and rising interest rates to combat it is usually a near-fatal cocktail for a party in control of the White House and Congress in the year they face the electorate.

In addition to warning lights flashing in the economy, Biden has presided over a sudden crisis along the southern border, where 170,000 illegal migrants are being apprehended every month.

“Getaways” — border-crossers who sneak in and evade contact with the Border Patrol — now number 30,000 a month.

Who these people are and whence they came, we know not.

Former President Donald Trump’s policies secured the border, and this new invasion is traceable to Biden’s trashing of Trump’s policy.

Indeed, Biden’s designation of Vice President Kamala Harris as point person on the border crisis, and her reflexive recoil from the duties of that assignment, testify that this latest invasion could be a killer issue for Democrats in 2022.

Also, the progressives’ adamant stand that rogue cops hostile to people of color are the true police crisis in America has been rendered politically obsolete by a nationwide surge in shootings, murders and mass killings.

How potent is the issue? Eric Adams, a Black former police captain running on the issue of public safety, won the Democratic primary for mayor of New York and is headed for Gracie Mansion.

Almost without exception, the cities where the shootings and killings are occurring have been run by Democrats for decades.

The “defund the police!” chant of Black Lives Matter and its camp followers is now being drowned out by a clamor for more cops to protect the people of color who are the collateral damage and victims of the shootings.

Other stories gracing front pages and evening news reports in coming months will be the horrors coming out of Afghanistan, as the Taliban capture towns and provincial capitals and exact retribution on those Afghans who made the fatal mistake of casting their lot with the Americans.

Biden did not take us into Afghanistan, but he ordered the rapid withdrawal, and his presidency will bear the political consequences of his presiding over yet another lost American war. As JFK said, life is unfair.

If the Democratic Party goes into the election of 2022 defending Biden’s border failures, decrying rogue cops rather than addressing the shootings and killings, and explaining away inflation and rising interest rates as “not our fault,” the result would seem to be foreordained.

Then there is the matter of race.

Is it a winner for the Democrats in 2022 to be seen as the party of tearing down statues of Robert E. Lee, Stonewall Jackson, and Lewis and Clark, of requiring that schoolchildren be indoctrinated in the tenets of “systemic racism” and “white privilege,” and learn about how their ancestors were slave-owners and their grandparents cousins or friends of Jim Crow?

As for the progressives’ agenda, the For the People Act, the John Lewis Voting Rights Act and the George Floyd Justice in Policing Act could all wind up dead on the Senate floor alongside Sen. Bernie Sanders $6 trillion plan for remaking America in the image of Norman Thomas.

All killed by filibusters bravely defended by Sen. Joe Manchin.