Trump Impeachment Was The Revenge Of The Political Establishment

The Lid
by Jeff Dunetz 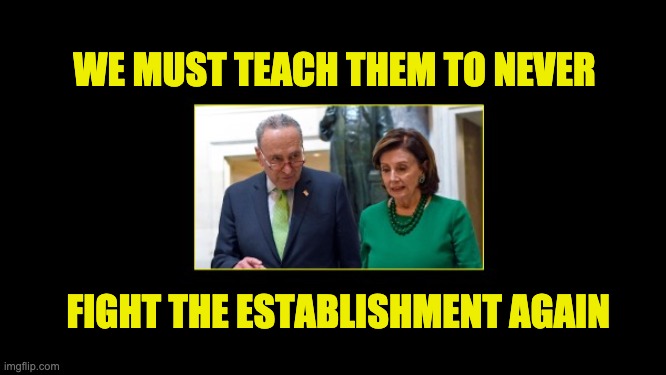 Well, ladies and gentlemen, if the annual tradition of impeaching Trump proves anything, it proves the political establishment won, and the American people lost. The real purpose of the congressional impeachment vote, the draining of corporate cash, and even the purging of Trump supporters on social media is for the establishment to drive home the point to the American people to never dare challenge them again.

With Pelosi and her caucus’ help, the establishment is exploiting last week’s invasion of the Capitol, which Trump didn’t incite. They achieved their purpose, which was to kick Trump and policies’ supporters in the ass as he leaves office.  There is a gathering of evidence and weeks of committee hearings before it gets to the full house in any impeachment case. But the same Democrats who delayed passing a COVID relief bill for months because they didn’t want to give Trump a victory was able to rush through a bill of impeachment in less than a week.   The Senate won’t remove Trump from office until after he leaves office, so the impeachment is the equivalent of a football player spiking the ball and doing a dance in the endzone after making a touchdown.

Some people were surprised that Eric Swalwell was appointed as one of the impeachment managers. The first president who ever economically confronted the Communist Chinese is prosecuted by a congressman who may have been corrupted by the CCP While it is not true that Pelosi appointed Swalwell based on the recommendation of a Chinese spy named Fang Fang, it may be true that she selected him because he has been one of the fiercest advocates of removing President Trump from office, not just over the past week but since 2016.  Her selection of Swalwell is meant to be another poke in the eye of Trump and his supporters from the establishment.

What about McConnell? The reports are that he supports the impeachment effort and may even speed up the Senate vote to boot Trump out of office. McConnell is establishment, his motivation may be different. Many establishment-based American corporations are pausing donations to the GOP. McConnell may be supporting this effort just to get the donation spigot turned back on. That’s also behind his public stance that he hasn’t decided how he will vote in a trial. He will vote the way he needs to get donations.

Despite the Democrat’s claim, the third section of the 14th Amendment does not prevent a President who was removed from office from running again. Even if you believe Trump was inciting an insurrection (which, as I’ve written before, I don’t), it purposely ignores mentioning the president:

No person shall be a Senator or Representative in Congress, or elector of President and Vice President, or hold any office, civil or military, under the United States, or under any State, who, having previously taken an oath, as a member of Congress, or as an officer of the United States, or as a member of any State legislature, or as an executive or judicial officer of any State, to support the Constitution of the United States, shall have engaged in insurrection or rebellion against the same, or given aid or comfort to the enemies thereof. But Congress may by a vote of two-thirds of each House, remove such disability.

Personally, I don’t believe he will want to run again in four years because he’s not a glutton for punishment. As much as most of his policies have helped this country, it’s so hard to believe that after a four-year break from the daily hatred, he will want to go through it again. He will have a voice–but he won’t run.

The next president, Joe Biden, is a product of the establishment, having served in DC for almost a half-century.  It was the establishment that put down the Bernie threat twice. His silent approval of the impeachment effort is proof of establishment control.  The man ran for office on the theme of unifying America.  If he truly believed those words, he would have gotten on TV and urged Congress to stop the impeachment because it’s time to heal and unite. But promises made, promises kept is just one more reason the establishment hates Trump. Even worse, after the impeachment, he urged the Senate to conduct the trial. Thanks in part to his own efforts Biden’s first weeks in the oval office may be dominated by a Senate trial trying to remove a president who has already left office.

The political establishment has been fighting Trump tooth and nail since he announced his candidacy.  By impeaching President Trump with less than a week left in his term, they’re telling half of America “F-U” and “never try to pre-empt our power ever again.”  Will it work? I don’t think so. The impeachment will widen the fracture of an America that is already too politically divided. And in the end, it might also cause the supporters of Trump’s policies to fight the establishment’s political power even more intensely.