Tucker for President? GOP Insiders Say Carlson Could Be 2024 Frontrunner 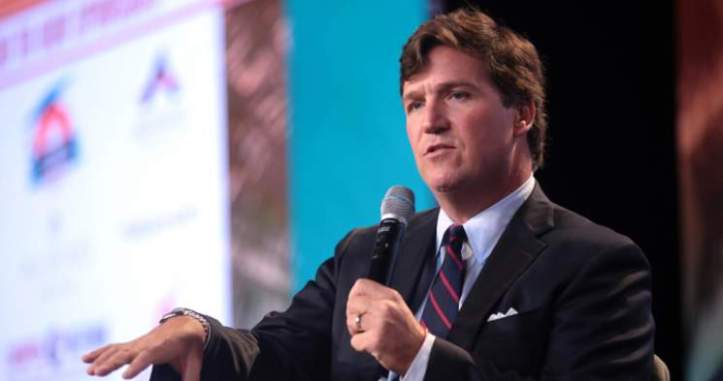 Has the Trump faction of the Republican Party found its successor?

Fox News host Tucker Carlson (shown), who is setting historic ratings records for the network, is being eyed by insiders within GOP circles as a strong contender for the party’s nomination in 2024 should he choose to run.

Last month, a group of Republican donors talked about trying to recruit the outspoken news personality for a future White House bid, as reported by Business Insider.

Since then, a number of GOP strategists have touted Carlson as having the clout to propel himself to the forefront when the party looks for a new leader after President Donald Trump leaves office.

“He’s a talented communicator with a massive platform. I think if he runs, he’d be formidable,” Luke Thompson, a Republican strategist who worked for Jeb Bush’s super PAC in 2016, explained to Politico.

In fact, 16 prominent Republicans interviewed by Politico spoke of a growing consensus within the Republican Party that the 51-year-old Carlson would have a major shot, despite never having held or run for public office before.

“No one can dismiss this and say it’s completely implausible,” said Rich Lowry, editor of National Review and author of The Case for Nationalism.

“There is at the very least a significant faction within the Republican Party that [Carlson] has a huge stake in and arguably leadership over,” Lowery observed. “If he has political ambitions, he has an opening. He has a following and a taste for controversy. He’s smart, quick on his feet and personable. Political experience matters less than it once did.”

Sam Nunberg, a former political aide to Donald Trump who knows Carlson personally, said the Tucker Carlson Tonight host’s chances of receiving the nomination would be even greater if having to run against a President Joe Biden. “Let me put it this way: If Biden wins and Tucker decided to run, he’d be the nominee.”

Nunberg, however, doesn’t believe Carlson will run because “he’s so disgusted with politicians.”

Many of those who know Carlson will echo the sentiment, finding it unlikely that he would actually put his hat in the ring. According to Nunberg, Trump ally Roger Stone unsuccessfully tried to convince Carlson to run for president on the Libertarian ticket in 2012.

But that was eight years ago. Since then, the Trinity College graduate and talk-show host has risen to become one of the leading intellectual voices on the Right in the Trump era. Tucker Carlson Tonight is currently the most-watched cable news program in history. On Fox News’ YouTube channel, Carlson’s segments from the last quarter have scored more than 60 million views.

While claiming loyalty to President Trump has become a must for success in either elected office or political commentary nowadays, part of the reason for Carlson’s success is his ardent support, not just for the president, but for “Trumpism” itself.

Carlson has vehemently defended the Trump agenda of reducing immigration, ceasing the offshoring of American jobs, avoiding unnecessary foreign wars, and maintaining law and order — even when it has meant criticizing the president for straying from his own platform.

It has also meant taking aim at individuals within President Trump’s inner circle whom other Republicans might consider off-limits. Carlson, for instance, has blasted Jared Kushner, the president’s son-in-law, over reports that he has softened his father-in-law’s positions on immigration, foreign policy, and other matters.

“No one has more contempt for Donald Trump’s voters than Jared Kushner does, and no one expresses it more frequently,” Carlson said last month.

He has also gone after Republicans who claim to be conservatives but who bow to the mainstream liberal agenda.

After former Ambassador to the UN Nikki Haley said the killing of George Floyd “needs to be personal and painful for everyone” in order for the country to heal, for instance, Carlson responded: “What Nikki Haley does best is moral blackmail.”

A 25-minute monologue on June 8 displays Carlson’s ability to verbalize what conservatives across America really feel with an unabashed, biting attitude.

Speaking about the riots that have swept the nation after the death of George Floyd, Carlson described Black Lives Matter as a “political party” and urged the president to restore law and order. “This may be a lot of things, this moment we are living through. But it is definitely not about black lives, and remember that when they come for you,” he said during his monologue.

The comments prompted several advertisers, including Disney, Papa John’s, and T-Mobile, to cut their ties with the network, though it has happened before and hasn’t stopped Carlson yet.

While it remains uncertain whether Carlson would consider running, a former White House official believes he would stand a better chance of winning the presidency than even someone such as Vice President Mike Pence.

“I think Day One, Tucker probably starts ahead of those people if he does run,” he said.

Luis Miguel is a marketer and writer whose journalistic endeavors shed light on the Deep State, the immigration crisis, and the enemies of freedom. Follow his exploits on Facebook, Twitter, Bitchute, and at luisantoniomiguel.com.