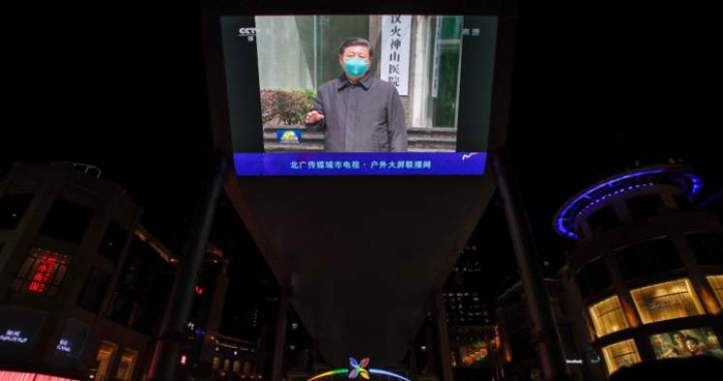 Xi Jinping (shown on giant TV screen) is the Coronavirus Hero and Donald Trump is the Villain to the globalist choir: WHO, China, Bill Gates, Council on Foreign Relations, Big Media.

“Xi leads people’s war on epidemic,” blares the headline for a March 12 story in China Daily, a primary propaganda fount for the Communist Party of China (CPC). Here are the opening stanzas of the China Daily rhapsody to the great Paramount Leader:

WUHAN — Standing in a hospital hall, a man wearing a face mask waved to a big screen. On the screen, a patient seen lying in bed, flanked by two medical workers, waved back.

“What you should do now is stay confident. We all should be confident that we will win this war,” the man said through a video link at Huoshenshan Hospital in Wuhan, epicenter of the novel coronavirus pneumonia outbreak and capital of Hubei province.

The man of the hour was President Xi Jinping, commander-in-chief of China’s war against COVID-19, who flew into Wuhan on Tuesday to inspect epidemic prevention and control work on the ground.

“There is no doubt that the Chinese people, under the strong leadership of the Communist Party of China with Xi Jinping as the core, have made remarkable contributions to the global fight against the epidemic,” declares another China Daily article on March 16.

Hundreds of similar articles have belched forth from the Chinese media since the coronavirus outbreak. That China Daily, People’s Daily, Xinhua News, and other official propaganda outlets would dispense such cartoonish, over-the-top drivel glorifying Xi Jinping is hardly surprising. That’s what propaganda outlets for totalitarian governments do; that’s their job. Disseminating propaganda, lies, and disinformation is the very reason for their existence. And since Xi has climbed to the top of the Beijing dogpile the Communist Party has assumed even more coercive control over the press than was previously being exerted.

As we reported in detail in 2013 (“China’s ‘Journalists’ Ordered to Take New Propaganda Training”), the Communist Party of China’s Central Propaganda Department announced, on October 10, 2013, a mandatory three-month training program for all journalists to curb deviation from the Party line in “news” reporting. Since that time, the Chinese media has built a cult of personality around Xi to rival that of infamous mass-murderer Chairman Mao.

Xi and China Provide a Model of Leadership for the World?

According to the Chinese propagandists, not only is Xi Jinping a heroic leader for China, but the leadership provided by him and the Communist Party of China is a model for the world to emulate. Here is yet another bouquet to Xi from China Daily: “China’s response to novel coronavirus pneumonia has set an example for the world in coping with the contagion and offered experience in advancing global public health governance, officials and experts said.”

The same article quoted Suerie Moon, director of research at the Global Health Centre of the Graduate Institute of International and Development Studies in Geneva, Switzerland, as stating that “the world needs stronger and more resilient global governance to deal with outbreaks, adding that as a major global player, China has both the potential and the capacity to play a larger role in global governance processes affecting health.” Moon’s Global Health Center is one of many similar outfits that serve as adjuncts of the Geneva-based World Health Organization (WHO), the bureaucracy slated to lead UN’s long-planned global socialized medicine.

For those who may have missed it in the media’s coronavirus avalanche, “global health governance” has become the new daily meme from globalist policy “experts.” WHO’s Director-General Tedros Adhanom Ghebreyesus (more commonly known as Dr. Tedros) has led the pack in proclaiming the need for “global health governance,” with China serving as the model. Since the beginning of the COVID-19 outbreak, Tedros has been a non-stop media machine, with daily praise for China’s communist regime — helmed by the Great Leader Xi Jinping — along with appeals for more funding and more power for the UN’s WHO bureaucratas. Ditto for other WHO and United Nations officials. That is hardly unexpected, as the UN and WHO have become increasingly dominated by Chinese nationals, along with European, American, and African toadies for the Beijing regime. (See here and here.)

On March 8, China Daily trumpeted Dr. Tedros’ expression of appreciation to China for a $20 million contribution to WHO. Never were hundreds of billions of dollars-worth of global propaganda services so cheaply bought. Not only do XI and communist China receive accolades from UN/WHO officialdom and the world’s “free” press, but the communist objective of restructuring the world along the lines advocated by China receives an immeasurable boost. The term “global governance” came to the fore in the 1990s with the UN-appointed Commission on Global Governance. As The New American reported in 1996, (“Target: World Government”) the push for global governance, as promoted in the Commission’s 1995 report, Our Global Neighborhood, was (and is) a push for a socialist world government.

In a China Daily article entitled “China’s action draws praise from WHO,” we read of China’s “heroic” efforts:

Leaders of the World Health Organization have applauded China’s massive response to the outbreak of the novel coronavirus multiple times in recent weeks, and they have also been challenged by some skeptical reporters as to why they kept praising China.

When a reporter from Euronews, a French TV network, again raised the question at a news conference on Wednesday evening, asking if it was the Chinese government that asked the WHO for praise in order to save face, WHO Director-General Tedros Adhanom Ghebreyesus became emotional.

He told reporters that when the WHO board met lately, almost all member states praised China for what it did, and they said that because China took massive action at the epicenter of the outbreak and shut down Wuhan. It helped to prevent the virus from being exported to other places in China and the rest of the world, he said.

In addition to its unabashed exaltation of Xi and the CPC, China Daily, and the rest of the CPC propagandists have repeatedly bashed the United States and President Trump, calling his references to the “China virus” and “Wuhan virus” explicitly racist and xenophobic.

China Daily condemned Trump for using “the widely regarded racist and stigmatized term ‘Chinese virus’ to describe COVID-19, something the WHO has repeatedly warned against.”

• “WHO warns against using virus slurs”;

• “US spin on virus’s name condemned”;

• “US politicians’ virus stigmatization against China is xenophobic and unhelpful: analysts”;

• “Trump criticized for ‘Chinese virus’ use.”

Again, it should surprise no one to learn that China’s communist propaganda organs are boosting Xi and bashing Trump. But it should serve as an eye-opener to those whose eyes have been wide shut that the global press — and especially the U.S. and European media — have gladly served as an echo chamber for Xi’s propagandists.

Never-Trumper Max Boot, a senior fellow on national security at the Council on Foreign Relations (CFR) and one of the Deep State Washington Post’s window-dressing “conservatives,” has used his Post column and his Twitter feed to pound President Trump relentlessly for his alleged leadership failures regarding the virus epidemic. Dr. Ezekiel Emanuel (CFR member and brother of Chicago Mayor Rahm Emanuel), a former Obama health policy adviser and currently an advisor to WHO’s Dr. Tedros, has been all over the media attacking President Trump’s coronavirus actions. As the most influential globalist think tank and the main incubator for Deep State operatives that have run the U.S. government throughout Democrat and Republican administrations for much of the past century, the CFR has played a major role in pushing the “global health governance” line, along with the anti-Trump/pro-China narrative. Here are a few of the recent CFR offerings on the above subjects:

• “Why Global Governance of Disease Matters for the Emergence of a Novel Coronavirus”;

• “China and Coronavirus: From Home-Made Disaster to Global Mega-Opportunity”;

• “Andrew Yang’s Moment: The Economic Costs of the Pandemic Mean the Time for UBI Is Now”.

The last article mentioned above, referencing former Democratic presidential hopeful Andrew Yang, suggests parlaying the economic havoc wrought by the coronavirus into an opportunity for implementing Yang’s signature Universal Basic Income (UBI) proposal. Just have the government (i.e., the taxpayers, or future taxpayers) spoon out direct cash payments of $1,000 per month to each and every American adult. The author of that socialism-promoting article is CFR bigwig Edward Alden.

The CFR has even launched its own website, thinkglobalhealth.org, to promote the idea of “global health governance.” This new endeavor “was made possible by a generous grant from Bloomberg Philanthropies,” the website says, referring to the foundation of Michael Bloomberg (CFR individual and corporate member), the billionaire media mogul, former New York mayor, and recent presidential hopeful. Thinkglobalhealth.org is run by Thomas J. Bollyky, who is the senior fellow for global health, economics, and development at the CFR. He previously served in the Obama administration in the Office of the U.S. Trade Representative, and prior to that, as a legal advisor to the World Health Organization and a consultant to the Bill & Melinda Gates Foundation.

The Bill & Melinda Gates Foundation, of course, is at the very center of the matrix of organizations and institutions pushing for “global health governance” and “reproductive health,” and population control. The Gates Foundation is a big financial backer of WHO, the National Institutes of Health (NIH), and the Centers for Disease Control (CDC), and was a big backer of the Global Health Initiative of President Obama and Secretary of State Hillary Clinton. Bill Gates is also a founding member of the ultra-exclusive group of billionaire population control advocates that calls itself The Good Club, which includes among its handful of members George Soros, Michael Bloomberg, Ted Turner, and Oprah Winfrey. The late David Rockefeller, storied banker and longtime chairman of the CFR, was the organizer and eminence grise of the club.

Gates, Soros, and the rest of their globalist ilk hate President Trump but love communist Supreme Leader Xi Jinping. China Daily proudly notes that Microsoft billionaire Gates recently committed emergency funding of up to $100 million, much of it for China’s coronavirus efforts. “Chinese President Xi Jinping has written back to Bill Gates, co-chair of the Bill & Melinda Gates Foundation, after receiving a letter from the US business leader on the novel coronavirus disease,” China Daily reported.

“In his letter dated Feb 20, the Chinese president wrote: ‘I deeply appreciate the act of generosity of the Bill & Melinda Gates Foundation and your letter of solidarity to the Chinese people at such an important moment.’” “We are resolute in protecting the life and health of the people of China, and of all countries around the world. We are determined to do our part to uphold global public health security,” Xi added.

Bill Gates and his Bill & Melinda Gates Foundation are leading forces in the moves to bring about socialist-communist-capitalist “convergence” under a system of elite “global governance.” In 2017 Gates was honored by China’s communist regime by being inducted into the Chinese Academy of Engineering.

In 2013, Gates was an honored guest — along with George Soros and the International Monetary Fund’s Christine Lagarde — at the Boao Forum for Asia, where Xi Jinping delivered the keynote address. Gates, Soros, Bloomberg, Turner, Rockefeller, and other globalists of our ruling classes, seem to be far more comfortable with totalitarian thugs such as Xi than with the nationalist-minded, freedom-oriented “deplorables” who elected President Trump. Like the pigmen in the final scene of George Orwell’s Animal Farm, who are neither pig nor man, but some kind of freakish morphed creatures, the globalist elites are neither communist nor capitalist, but some kind of creepy and detestable mixture of the two. They are quislings who are fomenting and using the current coronavirus panic to build the “global governance” world government scheme that the CFR and its globalist allies have been pushing for the past century.

William F. Jasper is senior editor of The New American.