The New American
by Steve Byas 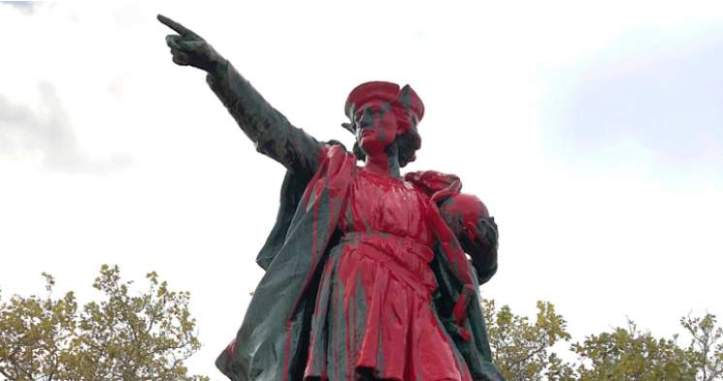 Photo shows a statue of Christopher Columbus in Providence, R.I., after it was vandalized with red paint; Oct. 14, 2019: AP Images

Despite a 2017 Rasmussen poll showing that 58 percent of Americans supported keeping Columbus Day, the American Left has made the “Admiral of the Ocean Sea” a symbol of sorts for their attacks upon Western Civilization and Christianity. In fact, it appears that they are only increasing their efforts to denigrate Columbus.

But the great explorer, whose daring voyage across the Atlantic Ocean in 1492 ended the disconnected histories of the world, has his staunch defenders.

Unfortunately, as is the case with so many historical and political disputes today, a rational discussion of the merits of Christopher Columbus is almost impossible, as his detractors routinely accuse him of the vilest of crimes — murder, rape, instigator of the Atlantic slave trade, destroyer of indigenous culture — and then accuse those who attempt to defend him as racists.

For example, in New Mexico, state Representaive Derrick Lente, a Democrat, sponsored a bill that scrapped Columbus Day. Several other states, cities, and colleges have joined in defaming the historical reputation of Columbus. In defense of his bill, Lente argued that Columbus “led genocide, rape, pillage and death, and he tried to extinguish a large Native American population.”

Lente also said, “Christopher Columbus didn’t find us [Sandia people]. We have our own creation stories, our own language, our own history.”

There are so many false accusations made against Columbus, it is difficult to address them all. But Lente’s wild accusations are a good place to start. First of all, the Sandia people that Lente is so proud of are descendants of the Aztecs, a people who enslaved several other indigenous tribes in what is now Mexico, even eating them or sacrificing them in the hundreds of thousands upon altars to their gods. Yet, Columbus, a devout Catholic who introduced the Christian faith in the Western Hemisphere, is the one accused of genocide.

Unfortunately, these baseless charges of genocide against Columbus often go unchallenged. James Loewen, a left-wing former college history professor, wrote in his book The Lies My Teacher Told Me that the pre-Colombian population of Haiti was eight million, but “When Christopher Columbus returned to Spain,” the number of Indian adults was reduced to 1,100,000. Larry Schweikert, in his book 48 Lies About American History, countered, “To think that any pre-modern civilization could eliminate seven million people in just over two years defies all logic, not to mention history.” After all, he had only three ships on his first voyage, and even on his second voyage, he probably had no more than a thousand men, Schweikert contended, and asked how “one thousand men … could kill seven million people in three years!”

Other anti-Columbus rants are just as irrational. David Stannard, in his 1992 book American Holocaust argued that Europeans and whites were responsible for plagues and atrocities, which led to the annihilation of 95 percent of native populations. But this argument is nonsensical. Since Columbus thought he had reached the outskirts of Asia, did he intend to take diseases to people there? After all, his primary desire was to convert the people of China and the surrounding region to Christianity. Why would he want to take smallpox and other such diseases to kill people who had just converted to his Christian faith?

Even Kris Lane, a professor of colonial Latin American history at Tulane University who supports the abolition of Columbus Day, disputes this particular libel against Columbus, contending that no historical record supports the idea that Columbus attempted the extermination of the native population of America.

Fortunately, Columbus still has defenders, who will no doubt be charged with hate and racism for daring to introduce actual history into the debate.

For example, New Mexico state Senator William Sharer, a Republican, opposed ditching Columbus Day as a “slap at Americans. All Americans.” While he has no problem with creating Indigenous Peoples’ Day in New Mexico — a state with several tribal peoples — Sharer argued, “There’s no reason to turn it into an anti-American holiday. Columbus was the first step to creating the American idea.”

Among the strongest supporters of keeping Columbus Day are Americans of Italian ancestry. At a time when Italian immigrants were looked down upon, his great achievement was a source of pride in this ethnic group. President Benjamin Harrison signed a proclamation in 1892 honoring Columbus on the 400th anniversary of his first voyage to the New World. In it, he called Columbus “the pioneer of progress and enlightenment.”

By the time Columbus Day became an official federal holiday, 45 states had already done so.

He certainly deserved the honor. For those who ridicule Columbus for his mistakenly calling the indigenous peoples he encountered “Indians,” it is absolutely certain they did not consider themselves the modern term, “Native Americans,” either.

Certainly, Columbus was not a perfect man. As Samuel Eliot Morrison wrote in his classic work Christopher Columbus, Mariner, “He had his faults and his defects, but they were largely the defects of the qualities that him great — his indomitable will, his superb faith in God and his own mission as the Christ-bearer to the lands beyond the seas, his stubborn persistence despite neglect, poverty, and discouragement.”

Because of Columbus, millions of individual souls in the Western Hemisphere were exposed to the Christian religion. While this is, for some, at best a non-issue, and for others an outright negative, it carried both eternal and temporal positive consequences for the indigenous peoples of America. Human sacrifice and cannibalism soon came to an end. In Europe, life was improved dramatically by the introduction of new foods. Indeed, if one were to make a “short list” of the persons in history who had done the most to improve the lives of more human beings, a name that would have to be on that list would be that of Christopher Columbus.