Airplane Contrails Are Changing The Climate

The Bulletin.org
by Dawn Stover

It’s no secret that air traffic is growing. The International Air Transport Association predicts that the number of passengers flying could double by 2037, to 8.2 billion, and air freight is following a similar trajectory. As the demand for air travel soars, so too will the climate-altering gases emitted by airplanes burning fossil fuels.

But emissions aren’t the only way airplanes contribute to global heating. They also streak the skies with condensation trails (contrails), which act like cirrus clouds—reflecting sunlight but also trapping heat in the atmosphere. The science of how contrails, and clouds in general, affect the climate is still developing. But the latest study estimates that the global-heating effect of contrails will triple between 2006 and 2050. That makes them air travel’s “dirty secret,” in the eyes of some atmospheric scientists.

Sky-high emissions. In 2018, for the third year in a row, transportation was the largest source of US greenhouse gas emissions, if fuels for international travel are included. Within the transportation sector, aviation is the most carbon-intensive form of travel. And emissions from aircraft are rising much faster than from cars, because of improvements in cars’ fuel efficiency and the spread of electric cars.

The demand for air travel is increasing even faster in places like China, India, and Indonesia. In less than a decade, China will have more air traffic than the United States.

The problem with contrails. Those wispy stripes left behind by airplanes have a surprisingly forceful, albeit short-lived, effect on the climate. After accounting for factors such as aircraft improvements that are expected to reduce soot emissions, climate researchers at the German Aerospace Center recently estimated that the heat-trapping effects of cirrus cloudiness caused by contrails will “increase significantly over time” because of the large projected increases in air traffic—which is growing so fast that efforts to make airplanes less polluting won’t be able to keep up with the growing effects of contrail clouds. Contrails might also have indirect effects, which are still unclear, on other clouds and on wind patterns.

Scientists have long known that contrails can affect regional climate. The empty skies during the three days after 9/11, when all commercial airliners were grounded, allowed for an unintended experiment showing that contrails mimic the effects of normal clouds.

The contrail-climate connection may have unintentionally bolstered a conspiracy theory: that the government is trying to manipulate the weather by laying down suspiciously gridded “chemtrails.” The theory relies on a fundamental misunderstanding of how contrails form and how long they can persist in the atmosphere. For example, many people are not aware that planes and ships (which also leave tracks in the sky) travel along well-defined traffic lanes, often at regularly spaced intervals, which can create distinctive patterns of parallel lines. A 2016 survey of scientists with expertise on contrails not only debunks the “chemtrail” conspiracy but also demonstrates how photos and other data cited by conspiracy theorists can be explained by well-understood physics and chemistry.

Mitigation for aviation. One way to address the growing problem of aircraft emissions is for people to take fewer flights. Unsurprisingly, though, the aviation industry’s strategy does not involve less flying.

The industry’s short-term plan is to increase fuel efficiency by replacing older aircraft with newer ones. Airlines are also calling for governments to adopt a voluntary offsetting scheme that would become mandatory after 2027. Called the Carbon Offsetting and Reduction Scheme for International Aviation (CORSIA), it would cap net emissions from international aviation at 2020 levels. To stay below the cap as air traffic continues to grow, airlines could purchase offsets through a carbon market. However, as the authors of the recent German study on contrails pointed out, “carbon offsetting deals only with the impact of CO2 emissions while leaving the impact of contrail cirrus on climate unchanged.” 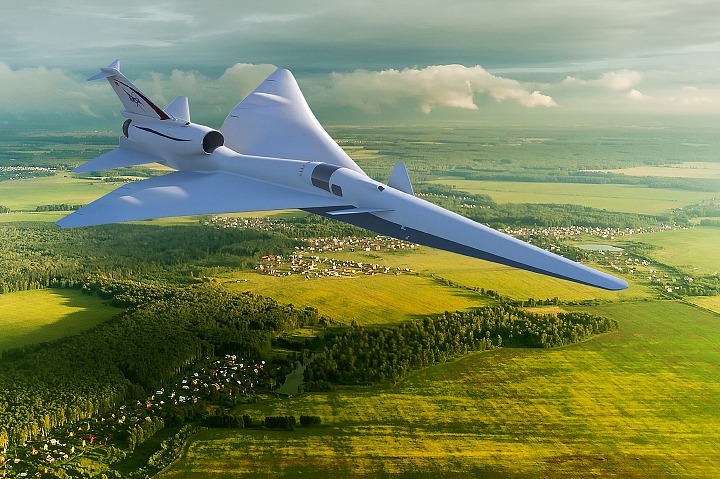 NASA says its X-59 experimental plane will fly at supersonic speeds, but will produce shockwaves that will only make a quiet rumble rather than a loud sonic boom. Credit: NASA

Over the long term, airlines have vowed to cut their net emissions by 2050 to half of 2005 levels. That will require developing sustainable fuels, more efficient aircraft designs, and changes in air traffic control. The International Air Transport Association says it has a goal of one billion passengers flying on planes powered by a mix of jet fuel and sustainable aviation fuel by 2025.

As is so often the case, the White House is doing the exact opposite of what’s needed to solve the environmental problems created by air travel. Michael Kratsios, deputy assistant to the president for technology policy at the White House and President Trump’s nominee for chief technology officer of the United States, wrote in a June 25 Washington Post op-ed: “President Trump’s push to remove regulatory barriers to innovation means a return to supersonic flight for civilians is just over the horizon.” The Concorde retired in 2003, but NASA is conducting research that could lead to a new supersonic aircraft that would reduce the Concorde’s loud sonic boom to a “gentle thump.” However, nobody has figured out how to make a plane go that fast without using more fuel—and creating more climate-altering emissions.