Predatory “Green Capitalism” Is Monetizing the Air, and It’s Going to Cost You

I recently asked What’s Left to Monetize?, and longtime correspondent Mark G. provided the answer: the air we breathe, via carbon taxes and markets for trading carbon credits, i.e. financializing / monetizing Nature to benefit the few at the expense pf the many.

You asked, “What’s left to monetize? It appears the answer is ‘very little.’”

I respectfully disagree. The Biggest Enchilada of all is left. Air. Specifically carbon dioxide, CO2. We just have to figure how to get the yokels to agree to pay for that which was formerly free. Got it! First we browbeat them into believing its evil and that we have to tax it to save all life on Earth. Then, following in the finest traditions of the degenerate late medieval Catholic Church, we’ll commission sellers of “Indulgences” to allow sinning at ever rising prices. a/k/a “Carbon Credit trading”. This doesn’t require any value added and the profits on “buy zero sell high” are limitless.

This is the specific outline and the very same agencies that so love financialization of all kinds, $2 trillion dollar student debt to sustain obscenely paid college administrators and academics, endless academic credentialism and huge Hipster Cities sitting on container ports and mediating the China Trade, are all promoting this financialization of CO2 as hard as possible.

This is why a nullity like the Paris Climate Accords continues to be pushed even after its proven every way possible that a) the biggest emitters like China and India won’t adhere to them and b) even if they did the prescribed regimes will do nothing anyway.

And its why I “don’t believe” in it. Or rather, its why I believe its just the next and biggest financial scam.

Thank you, Mark, for answering my naive question: of course Wall Street and the Davos Crowd are salivating over the hundreds of billions of profits to be skimmed from carbon taxes and trading. Not that corporations, financiers or billionaires will pay the carbon taxes; they will be passed on to consumers of everything that emits CO2, i.e. pretty much everything, including us of course.

Never mind that plant life needs CO2, and that planting trees could soak up the carbon at a fraction of the cost of neoliberal carbon taxes/credits; the goal of the “environmentalists” flying in on their private jets isn’t to actually reduce CO2–it’s to engineer a new source of rentier profits via monetizing / financializing CO2.

Planting a trillion trees could be the “most effective solution” to climate change, study says.

Here’s the neoliberal fantasy that’s being sold and sold hard: making a market for carbon credits etc. will magically cause those paying more for emitting carbon to emit less.

This is the Neoliberal Skim/Scam: privatizing what was once free and funneling the profits to the few at the expense of the many. Call it rentier, call it exploitation, call it predatory– all are accurate.

So streets that once offered free parking now have parking meters that have been privatized to benefit private-sector corporations.

The neoliberal predators have come up with a new sales pitch to cover their predation: “green capitalism,” the notion that sending all the Bad Things to the landfill and replacing them with very costly (and oh so profitable to global corporations and financiers) Good Things will magically save a status quo dependent on “Growth” while also magically reducing CO2.

Wrong on all counts.If we measure the full lifecycle costs and environmental burdens of the Good Things (all electric vehicles, etc.), we find that replacing all the existing stuff on the planet will actually increase CO2 immensely–the reduction is trivial while the CO2 emitted in the extraction, processing, manufacture, transport and maintenance of the replacement stuff (i.e. “Growth”) will vastly increase CO2, as will all the green capitalists’ private jets.

As Mark pointed out, the majority of CO2 is emitted by nations that have no interest in reducing CO2, nor will they pay carbon taxes or play Wall Street’s game of trading carbon credits.

So the net result of neoliberal “green capitalism” is higher CO2 and hundreds of billions of dollars of wealth skimmed from those who can least afford it while Al Gore and the rest of the Davos / NGO / philanthro-capitalist elites jet in for another “green” conference.

There is nothing remotely capitalist in the traditional sense in this Neoliberal Predation: no new products or services are created, no value is created, and CO2 isn’t reduced; it’s pure exploitation of the powerless who have been brow-beaten into believing the skim/scam is somehow “environmental.”

Longtime correspondent Simon H. submitted a series of links for those who wish to know more about the hijacking of the environmental movement by predatory “green capitalism”:

The global movement calling for action on climate change has captured the imagination and enthusiasm of thousands of people who care about the future of our world.

However, alarming evidence has emerged, suggesting that this movement is being manipulated by business interests who aim not to save the planet but to save capitalism, not to halt the environmental crisis but to profit from it, not to protect nature but to commodify it.

We don’t want the powerful positive energy of nature lovers and environmentalists to be shunted into the sterile dead end of ‘green capitalism’, used as a PR tool to make it easier for governments to raid our collective piggy banks and channel trillions of pounds and dollars into the pockets of venture capitalists who have leapt aboard the ‘climate justice’ bandwagon in the hope of getting very rich.

For this reason we have put together this page of useful links, so people can study the evidence and come to their own conclusions.

For those who prefer facts to hyperbole in service of predatory private wealth, here’s a chart of China’s energy production: dirty CO2-spewing coal is the primary source.

This mirrors the global reality: renewables are still signal noise, and carbon taxes and trading credits will do nothing to change this.

Plastic pollution tracks CO2 and a variety of related environmental burdens:The primary sources are in Asia and developing nations. So enforcing bogus carbon trading in North America and Europe will do essentially nothing to address the actual sources of CO2 and other industrial / consumer pollutants. 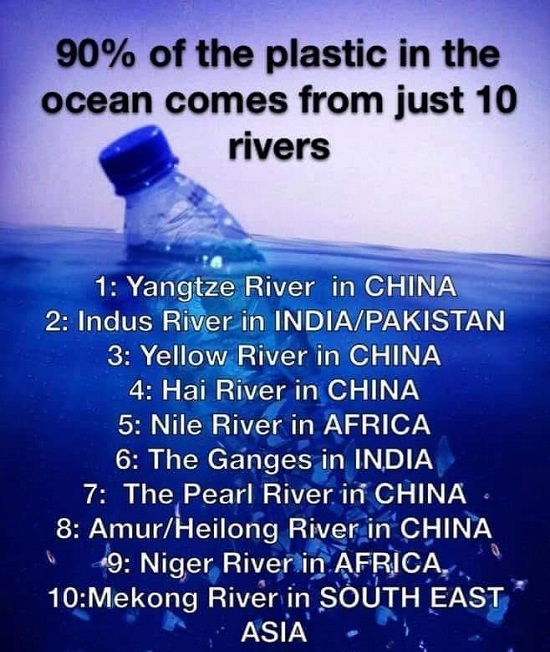 You want to reduce CO2? Then trigger a global depression that reduces global consumption of everything by 50% and destroys 95% of the phantom wealth owned by the global elites trying to monetize the air.