After 100 Years, Socialism Comes to America 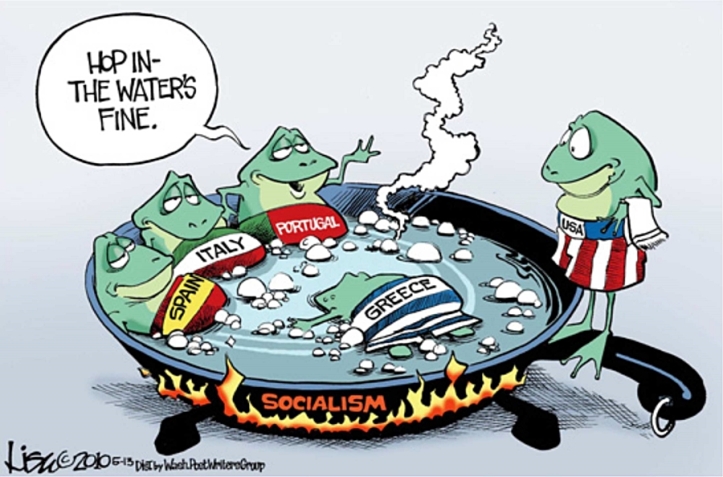 In what has to be one of the great unmentioned political ironies, it has taken an entire century for the United States to catch up with the world it claims to be leading. And had it not been for the lone independent Senator, Bernie Sanders of Vermont, it would still not have happened, even as the other major twentieth century political movement, fascism, appears for a second round.

Let’s step back for a moment and consider that timeline: in 1917, the Russian Tsar was brought down by a Marxist-inspired revolution led by Vladimir Lenin. The United States led a five-year long unsuccessful war against the ‘Reds’ in an effort to ‘save’ ‘’white’ Russia. Meanwhile, in Germany and Hungary, socialists tried to establish workers’ councils, leading, in Germany, to what became known as the Weimar Republic. In 1922, Adolph Hitler led a failed coup, but with Germany’s socialists too timid to prevent the rise of Nazism, by 1933 German industrialists were so afraid of their ideas that they allowed Hitler to become Chancellor.

Italian Fascism and German Nazism ultimately became so unacceptable to American and British capitalists, that they joined the anti-Nazi effort in World War II. Following that, they opposed a worldwide socialist movement, mainly by Cold War means, although Europe was ‘permitted’ to create ‘social democracies’. For the last 65 years, the old continent flourished under this system that left industry in private hands while ensuring wide safety nets for workers, while the United States did its utmost to contain even that attenuated form of socialism, through what became known as ‘neo-liberalism’, re-privatizing industry and cutting back the working population’s gains by imposing austerity.

By 2016, in neo-liberalism’s ‘home country’ a stagnant so-called ‘middle class’ (a euphemism for the Marxist-inspired and therefor taboo term ‘working class’) became so desperate that a social democrat named Bernie Sanders was able to draw the attention of its children. At first the Democratic Party — with which Sanders voted in the Senate — pretended to look the other way, assuming that ideas which had been discredited for a century could never compete with the overwhelming popularity of Hillary Clinton, especially among women liberationists and their female descendants.

In one of those quirks of history that almost defy explanation, Bernie caught on with the children of former hippies and yuppies (those who in the sixties had dropped out then rejoined the capitalist fold with a vengeance). The college education their parents had been able to pretty much take for granted with a little help from their parents, had become so onerous that vast bank loans were required to pay for it, and the jobs they could look forward to included neither free health care nor family leave to care for infants. Not to mention that two week vacations were still the norm, as Michael Moore documented the enviable perks of European workers in his film “Were to Invade Next”. (The few books that had been published over the past decade documenting these disparities could never reach a comparable audience…)

Added to Bernie’s unreconstructed Brooklyn accent (so different from that of Senator Joe Lieberman his co-religionist from mainly WASP Connecticut who was Al Gore’s running mate), made him sound even more authentic, and the more emphatically he repeated that the community — now personified by government— had obligations toward its individual members, the more obvious this suddenly seemed.

When the Democratic Party realized that an entire cohort was escaping its grasp, it enacted a series of maneuvers (such as deciding one local primary that had Bernie leading, by the toss of a coin and at one point denying the Sanders campaign access to its voter emails list), to ensure that Bernie could not deprive Hillary of the nomination.

And yet, since Donald Trump became president, casting the long shadow of fascism over the country, the Sanders cohort has started to actually adopt socialist ideas. A few months ago, a young woman of Puerto Rican background, Alexandria Ocasio Cortes, burst upon the political scene, forcefully identified herself as a Democratic Socialist, and defeated a long-time Democratic representative from the Bronx in a primary election in a campaign entirely run by volunteers. Her unexpected victory brought the Democratic Socialist Party of America into the spotlight for the first time since its founding in 1982 by Michael Harrington, a professor of political science whose books brought him some name recognition, but whose party could not possibly win over a left that continued to place its hopes in the Democratic Party.

It has taken 60 years since the heyday of McCarthyism, when people believed to harbor socialist beliefs were blacklisted, and 36 years since its founding, for the Democratic Socialist Party to become mainstream. (At the end of 2017, membership was 32,000, but as of August 2018, it was at 48,000, the number of local chapters having increased from 40 to 181.The median age of its membership is now 33, compared to 68 in 2013, and suddenly, there are about thirty socialist elected officials nation-wide.

Inevitably, this surge was countered by a growing white supremacist movement, complete with torchlight parades, which last year provoked the death of a young woman in Charlottesville, Virginia. This weekend, on the anniversary of that event, the ‘Alt-Right’ to which President Trump sends ‘dog whistles’, called a show of force in a park in front of the White House, for which a permit was issued in the name of free speech. Surprisingly, only a handful responded, while thousands showed up to oppose them, kept in check by a vast police force.

In a political system that has room for only two main parties, the question now is whether the Democrats, who are expected to retake control of the House of Representatives in November’s mid-term elections, will make room for America’s new left-wing, or whether the United States is destined to repeat the sad history of the Weimar Republic.

Deena Stryker is an international expert, author and journalist that has been at the forefront of international politics for over thirty years, exlusively for the online journal “New Eastern Outlook”.