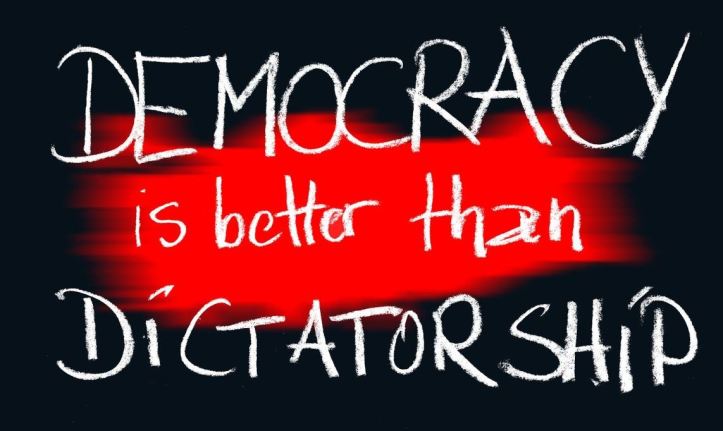 The first time when it became clear to me that I live in a dictatorship was in 2014 when reading, prior to its publication, the landmark (and still the only) scientific empirical study to address the question as to whether or not the United States federal Government is, authentically, a democracy — or, whether, alternatively, it’s instead more of a dictatorship, than a democracy. This study documented conclusively that America’s Government is the latter.

So, on 14 April 2014, I headlined “US Is an Oligarchy, Not a Democracy, Says Scientific Study”. Subsequently, my editor linked it to the published article at the Journal where the study was published, Perspectives on Politics, from the American Political Science Association, and the full study can be read there.

On 30 April 2014, was posted at youtube the video that remains, to this day, the best and clearest ordinary-language summary of what that badly-written academic study proved. See its explanation here:

That summary’s title is also better than the title of my article was; this excellent video headlines “Corruption is Legal in America”, which is another accurate conclusion from that study. Every American citizen should know what this 6-minute video says and shows from the academic study, because it explains how the super-rich, as a class, steal from everyone else (everyone who isn’t super-rich): They do it through corruption.

Then, that same person who created the video did another presentation of it, but this time with text accompanying the video, and this article was titled “One graph shows how the rich control American politics”, and it indeed showed how. The super-rich carry out their control via corruption, which is legal in America and which can be done vastly more by rich people than by poor people — poor people simply can’t buy the Government, and any who would even attempt to do so would be using only the illegal means, which the US Supreme Court says constitutes the only illegal means, and that’s blatant bribery, which is lower-class corruption, not the far more lucrative type of corruption that super-wealthy individuals have access to. Only the forms of corruption which are available only to the super-rich are legal in America. That’s the reason why the super-rich keep getting still-richer, while the rest of the population are lucky if they don’t become poorer.

On 28 July 2015, former US President Jimmy Carter was frank about this situation; as a caller at a progressive radio show, he said this about America’s soaring top-level corruption:

It violates the essence of what made America a great country in its political system. Now it’s just an oligarchy with unlimited political bribery being the essence of getting the nominations for president or being elected president. And the same thing applies to governors, and US Senators and congress members. So, now we’ve just seen a subversion of our political system as a payoff to major contributors, who want and expect, and sometimes get, favors for themselves after the election is over. … At the present time the incumbents, Democrats and Republicans, look upon this unlimited money as a great benefit to themselves. Somebody that is already in Congress has a great deal more to sell.”

Three days later, Huffington Post published my article about that statement, which was headlined “Jimmy Carter Is Correct That the US Is No Longer a Democracy,” and it had over 60,000 likes on Facebook (here the article is shown a bit earlier, when it had 56,000) but HuffPo reduced that number down to its currently shown number, 18,000; and this article turned out to have been the last submission of the 100+ that they accepted from me. They’ve rejected all of my submissions after it. No explanation was ever given, and I never heard anything from them again.

The scientific article about America’s Government had reviewed 1,779 pieces of proposed legislation during the period from 1981 to 2002, and it found that only what the super-rich wanted to become law did become law: “The preferences of the average American appear to have only a minuscule, near-zero, statistically non-significant impact upon public policy,” they said. That’s certainly not a democracy.

There has been speculation as to how far back historically America’s government-by-the-aristocracy (or, simply, America’s being an aristocracy — a rule over the public by the few super-rich, an “oligarchy”) has been in effect. Prior to Ronald Reagan’s Presidency, going back to the time when FDR died in office in 1945 as the President, the distribution of income and of wealth was much more equal in America than it started to become as soon as Reagan entered the White House and began the subsequent dominance of supply-side economics, which is based upon the supply-push belief that wealth trickles down from the few rich, instead of (as FDR believed) in a demand-pull way, that it percolates up from the many poor. FDR believed that what drives an economy is needs, not the products and services to fill needs. Reagan believed in the opposite, Say’s law, which says that whatever is produced will fill needs (or at least desires) — that production is what drives an economy, and that needs (and desires) just take care of themselves. So, FDR focused on “the common man” and especially the poor, but Reagan focused on “entrepreneurs” or the owners of businesses. (The middle class isn’t an issue here, but is simply the richer portion of the poor. Historically that has been the case. For example, America’s middle class has declined while the poor have mushroomed, but the top 5% are getting all of the gains; and most of that is going to the top 1% or even less. So: “poor” here includes the middle-class; and, to refer to “middle-class America” is now like referring to a dying breed — but it’s a breed of poor, not of rich.)

However, the extreme corruption at the top in this country is showing up more sharply than ever in recently declassified US Government documents about the JFK assassination — showing up as having begun much earlier than had generally been suspected, begun at least by the time when President Kennedy came into office on 20 January 1961. Kennedy found himself surrounded by the military-industrial complex that his predecessor, Eisenhower, had cultivated while he was in the White House and that “Ike” hypocritically warned the American public against, on his way out of office, only on 17 January 1961 — three days before Kennedy’s inauguration. Some of these corrupt people were ones whom Kennedy himself had brought in. Not all of them were Ike’s holdovers. But Kennedy was apparently shocked, nonetheless.

The beginnings of this profound corruption might be traced still farther back to moles in the Government (such as the Dulles brothers, Averell Harriman and Prescott Bush) who had built their careers after World War I by means of plying and mastering the revolving door between the Government’s foreign-policy Establishment and Wall Street. Starting at the very end of WW II, in 1945, agents of these moles ended FDR’s Office of Strategic Services and started Truman’s CIA. Right from the get-go, the CIA was deeply corrupt, as the following 2.5-hour BBC documentary from 1992 makes clear:

It documents from testimony of former CIA operatives in Europe, that the CIA had been hiring European aristocrats and committed fascists and even ‘former’ Nazis, to set up terrorist incidents in Europe rigged so as to be blamed by the public against communists and against any entities that were favorable in any way toward the Soviet Union. Numberless Europeans were injured and killed in terrorist incidents that were set up by the CIA to be, basically, anti-communist propaganda. This CIA operation was called “Gladio,” and it continues to this day, even though communism itself is gone.

Subsequently, a video was done that’s far briefer, 50 minutes, and which starts with interviews of some of the survivors of these CIA-NATO operations, so that it’s far more from the victims’ perspective than was the BBC’s lengthier documentary:

When Kennedy became President, he found himself surrounded by advisors who were urging him such as, on 22 March 1962, John Kennedy’s own brother and US Attorney General Robert F. Kennedy did, when RFK held a meeting to discuss “the possibility of US manufacture or acquisition of Soviet aircraft” because:

“There is a possibility that such aircraft could be used in a deception operation designed to confuse enemy planes in the air, to launch a surprise attack against enemy installations or in a provocation operation in which Soviet aircraft would appear to attack US or friendly installations in order to provide an excuse for US intervention. If the planes were to be used in such covert operations, it would seem preferable to manufacture them in the United States.”

“We could develop a Communist Cuban terror campaign in the Miami area, in other Florida cities and even in Washington. The terror campaign could be pointed at Cuban refugees seeking haven in the United States. We could sink a boatload of Cubans en route to Florida (real or simulated). We could foster attempts on lives of Cuban refugees in the United States even to the extent of wounding in instances to be widely publicized. Exploding a few plastic bombs in carefully chosen spots, the arrest of a Cuban agent and the release of prepared documents substantiating Cuban involvement also would be helpful in projecting the idea of an irresponsible government.”

Even JFK’s own brother RFK, and Secretary of ‘Defense’ Robert McNamara, and Secretary of State Dean Rusk — plus lots of holdovers from the Eisenhower Administration — thought that this sort of thing would be worth the President of the United States considering. Fortunately, JFK didn’t.

Michael Ellison had gotten to see a bit of the 12 April 1962 document decades earlier and he reported it on 2 May 2001 in Britain’s Guardian under the headline “Memos disclose US cold-war plot to frame Castro”. Ellison wrote that “The idea was an element in a wider scheme that ‘may be the most corrupt plan ever created by the US government’, asserts James Bamford.” Since Bamford is perhaps the world’s leading journalist and historian who has written about the NSA (books such as his 1983 The Puzzle Palace), for even him to have expressed surprise in 2001 that the US Government, at its top level, was predominantly staffed by people who were racking their brains to figure out ways to fake Soviet terrorism and attacks so as for the US and NATO to have a pretext to invade the Soviet Union, indicates how much more cynical we all have become after George W. Bush’s lies about ‘Saddam’s WMD’ as pretexts for the US and its collaborators to invade and destroy Iraq in 2003. Not only was John Kennedy surprised to discover it in 1962, but James Bamford was surprised to discover it even as late as 2001. Bamford in 2001 might not have said what he said there if he had seen that 1992 BBC documentary, which showed that the top level of the CIA had been like this from the time when the CIA started in 1947. But with so much history behind us now and which had still been classified information, and thus non-public, until 2001 when Bamford said that the 12 April 1962 document described “may be the most corrupt plan ever created by the US Government,” we today are hardly surprised at all to discover it. The corruption at the top of the US Government has long since overflowed its banks, out into the public’s consciousness. Not all the king’s horses and all the king’s men can put the myth of US Government decency together again.