During World War 2, nations desperately raced to harness the atom. The United State ultimately won that race, and during their victory lap – being the sole nation to possess nuclear weapons – used them against their enemy Japan – twice.

Tens of thousands of lives were extinguished in the blink of an eye and Japan, already a defeated nation, submitted absolutely to US hegemony which would prevail both over Japan and most of Asia for nearly a century onward.

Since the bombings of Hiroshima and Nagasaki, the US has used its immense economic disparity over the last seven decades to build a conventional army and employ various methods of overtly and covertly attacking, undermining, and even overthrowing the political and socioeconomic orders of targeted nations worldwide in its bid to take, hold, and expand global hegemony.

It has used its domination of the media to sell wars, manipulate public perception, and project its socioeconomic, cultural, and military will to the far reaches of the planet.

With the advent of the Internet and social media, its domination over both allowed it to plunge the entire Middle East and North Africa (MENA) into chaos and eventually war in 2011 during the so-called “Arab Spring,” a fact the New York Times in an article titled, “U.S. Groups Helped Nurture Arab Uprisings,” would later admit.

With each form of tactical and technological disparity manifesting itself in military aggression, subjugation, exploitation, and immeasurable injustice, attempts to diminish that disparity have helped strike a balance of power.

The development of nuclear weapons by the Soviets, then later China, India, and Pakistan as well as several European powers, helped strike a balance of power within which no nation dared strike another with such weapons again.

Asymmetrical warfare and increasingly sophisticated and prolific anti-tank and anti-air weaponry have allowed nations to raise the cost of US military adventures abroad to the point where direct military intervention has become all but impossible for the US (and other nations as well).

The alternative media has brought to an end what was almost total domination by the Western media over global public perception – and it has done so not only with the emergence of effective state-run media beyond the West, but also through the efforts of thousands of individuals and independent networks worldwide.

In other words, novelty provides those who pioneer and monopolize any given tactic or technology with an initial and significant advantage, but the democratization (widespread distribution) of these tactics and technologies minimizes this disparity and creates a balance of power that makes it difficult for any one party to take advantage of or dominate another.


Perhaps the most  frightening impending disparities humanity now faces are those in the fields of biotechnology and artificial intelligence.

The sequencing of the human genome has given rise to the practice of “gene therapy” – the ability to overwrite parts of an individual’s genetic code. In other words, genetic code can now be introduced into living patients that show cells in the body how to find and eradicate cancer, how to rebuild heart muscles, or how to properly produce insulin in the case of patients suffering from diabetes.

But if code can be introduced so precisely to do great good, it can also be introduced to do great harm. Vaccines laced with vectors delivering the genetic equivalent of malware could potentially, and very subtly, reduce fertility, diminish intelligence, and even manipulate gene expression associated with human behavior.

The prospect of using the concepts behind gene therapy for biological weapons was mentioned in the Neo-Conservative Project for a New American Century’s (PNAC) 2000 report titled, “Rebuilding America’s Defenses” (.pdf). The chilling report stated (emphasis added):

The proliferation of ballistic and cruise missiles and long-range unmanned aerial vehicles (UAVs) will make it much easier to project military power around the globe. Munitions themselves will become increasingly accurate, while new methods of attack – electronic, “non-lethal,” biological – will be more widely available. (p.71 of .pdf)

Although it may take several decade for the process of transformation to unfold, in time, the art of warfare on air, land, and sea will be vastly different than it is today, and “combat” likely will take place in new dimensions: in space, “cyber-space,” and perhaps the world of microbes. (p.72 of .pdf)

By democratizing this technology, we ensure that the tools used to create and defend against “biological warfare that can “target” specific geneotypes” are in the hands of not only people who seek to do so already, but also in vastly more hands that seek to detect, prevent, or counter such abuses. Democratizing this technology also ensures that the people who need it most get it, rather than remain subjected to the whims and interests of a handful of corporations who seek profits over people and purpose.
Work toward democratizing biotechnology is being undertaken by both institutions and individuals alike, around the world through opensource biotech tools, and community “DIYbio” labs. Nations are also working to build up their biotech infrastructure, both as a component to their healthcare systems and economy, and as a component of national security.

Artificial intelligence, long before we must worry about sentient machines and what they may or may not decide to do with a vastly inferior humanity, is already being used in highly specialized applications ranging from automatically extracting intelligence from the millions of photos uploaded to Facebook daily, to gaming the stock market, to managing the UK’s National Health Service (NHS), to automatically managing utility grids.

While many uses of AI are benign, the fact that so few institutions are engaged in high-level AI research and applications invites immense disparity and abuse. While AI applications today do not constitute a sentient being superior to humans in every conceivable way, they do constitute very focused algorithms that are vastly superior to any human performing the same specific task. 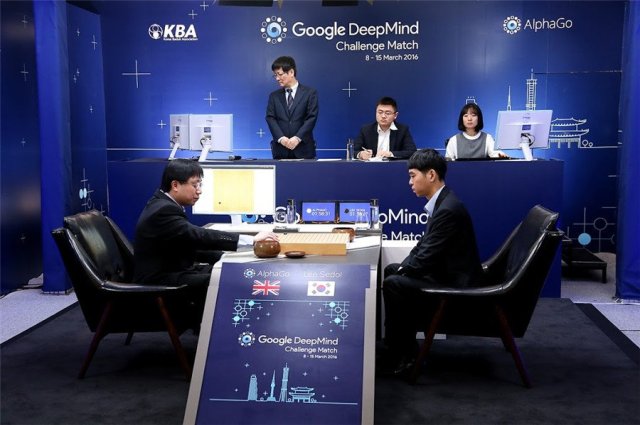 Google’s DeepMind subsidiary, and their AI AlphaGo was able to learn and then outplay the world’s best Go player. Other developers are creating AI platforms that can learn through trial and error how to play various video games before eventually mastering them with super-human reflexes and strategies.

Applied to games, they are quaint. Applied to warfare and they are terrifying. The high-speed, ultra-deadly nature of the first Gulf War in which the technological disparity between the US and Iraqi forces left the fourth largest military on Earth in ruination and retreat will be tame in comparison if and when machine learning is applied to real-world military operations.

The increasing use of drones and automation, and the eventual combination of the two, will create a network an AI simply needs to plug into and direct, either entirely or temporarily, to grant its operators a super-human advantage over their unprepared opponents.

And such contests need not be waged on conventional battlefields. Cyber and information warfare may also present a tempting battlefield upon which to deploy AI. Targeting the IT infrastructure of an opposing nation, or mass manipulating public perception with increasingly convincing AI ‘bots” working ceaselessly to create the illusion of persuasive consensus, could overwhelm unprepared opponents.

Just like DeepMind’s AlphaGo left its human opponent utterly, hopelessly defeated, so too would any military wielding a militarized AI algorithm. However, the ability to multiply force through the use of artificial intelligence is only an advantage if those it is being used against lack similar capabilities.

Artificial intelligence is not just a component of Facebook or Google’s business strategy – US policymakers admit that AI, as well as companies like Facebook and Google themselves, constitute an integral part of creating, maintaining, and projecting American power globally. Nations must not look upon AI as a novelty or an economic asset, but also as a central component to national security. Nations depending on Facebook and Google to prop up their IT infrastructure rather than brewing their own national alternatives are akin to nations during the age of empires inviting British gunboats into their harbors.

Artificial intelligence, biotechnology, and other forms of emerging technology must be viewed by each nation, state, community, and individual not as a mere novelty or potential industry, but also as a potential means to grant those who develop and monopolize it economic, political, and even military superiority history has taught us they most certainly will abuse.

Just like the citizens of Hiroshima and Nagasaki could never have fathomed the destructive power of the atomic weapons used against them, let alone anticipate they personally would fall victims to such weapons, we too allow ourselves to tempt fate by waiting for the first biological or AI strike before establishing a deterrence through a balance of power.

We are increasingly connected and empowered by the Internet and other forms of technology already being democratized. We know about emerging technology and we can easily find ways to either raise awareness regarding these issues or directly involve ourselves in the actual process of democratizing this technology. We can and we must, lest we languish under the mushroom clouds and in all-consuming fire ignorance, unpreparedness, and technological disparity invites.

LocalOrg seeks to explore local solutions to global problems by empowering people locally with education and technology to not only survive, but to thrive.