Bases and Confrontation – US Military Empire 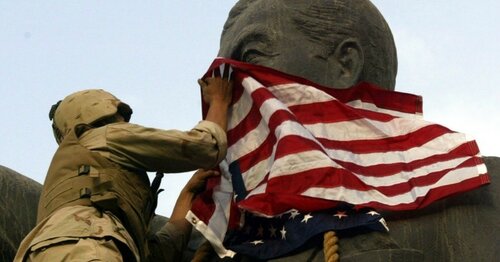 On 26 October the New York Times carried an intriguing commentary about spying. Its front page headlined a 1200 word report which included the statement that «Russian submarines and spy ships are aggressively operating near the crucial undersea cables that carry almost all global Internet communications, raising concerns among some US military and intelligence officials that the Russians might be planning to attack those lines in times of tension or conflict».

It is obvious that in the event of conflict Russia would do its best to destroy enemy undersea communications cables, just as its adversaries would try to do the same, but this wasn’t the point of the article, which somewhat lamely went on to admit that «there is no evidence yet of any cable cutting». Of course not. The cable story was only a lead in to the deeper intention of the piece which was to add to the drumbeat of anti-Russian propaganda. The writers then hit the relevance button by proclaiming that «the concern is part of a growing wariness among senior US and allied military and intelligence officials over the accelerated activity by the Russian armed forces around the globe».

At which you have to have a quiet smile.

The United States has special forces squads in 135 countries, according to a spokesman for Special Operations Command (SOCOM) whose commander, General Joseph Votel, stated in July that «approximately 11,000 special operators [emphasis added] are deployed or stationed outside the United States with many more on standby, ready to respond in the event of an overseas crisis». He continued that «I think a lot of our resources are focused in Iraq and in the Middle East, in Syria for right now; that’s really where our head has been,» although «I think we are increasing our focus on Eastern Europe at this time».

This increased focus is because «Russia is looking to challenge us wherever they can», which is an intriguing assertion from a man with 11,000 knuckle-dragging «special operators» swaggering round the world.

Votel was open about his duties in continuing that «we are – we think of ourselves – as a global force. We support the geographic combatant [US] commanders, but we are not bound by the artificial boundaries that normally define the regional areas in which they operate. So what we try to do is we try to operate across those boundaries». In other words, they make their own rules, which is a challenging concept.

Operating across boundaries from bases in 135 countries might be considered «accelerated activity» by US military forces around the globe, and it doesn’t stop there.

The New York Times piece went on to declare that Russian «accelerated activity» operations «are consistent with Russia’s expanding military operations into places such as Crimea, eastern Ukraine and Syria, where President Vladimir Putin has sought to demonstrate a much longer reach for Russian ground, air and naval forces».

Passing over for the moment the fact that Crimea and Ukraine are hardly «longer reach» for Russia – the one being a historic part of Russia with over 90 per cent of its citizens being Russian-cultured, and the other directly on its border – the statement that Syria demonstrates a «much longer reach» is absurd. The distance from Russia’s southern city of Sochi to Syria’s Aleppo is 800 kilometres (500 miles). The distance from the furthest eastern city of the United States (Portland, Maine) to the furthest western of Syria (Latakia) is 8,000 kilometres. So who extends the longer reach? Is it the US from its military bases all round the Middle East and its thirty-ship Mediterranean fleet? Or is it Russia, with two bases in Syria and six other bases outside its borders?

The exact number of US bases around the world is difficult to determine, but figures provided by the Pentagon in its latest Base Structure Report show that Washington admits to having over 600 bases in at least 74 countries.

David Vine, a professor at American University, notes that «while 686 base sites is quite a figure in its own right, that tally strangely excludes many well-known US bases, like those in Kosovo, Kuwait, and Qatar. Less surprisingly, the Pentagon’s count also excludes secret (or secretive) American bases, like those reported in Israel and Saudi Arabia. There are so many bases, the Pentagon itself doesn’t even know the true total».

As observed by President Putin in June 2015 in an interview with the Italian newspaper Corriere della Sera, «the aggregate military spending of NATO countries is 10 times, note – 10 times – higher than that of the Russian Federation. Russia has virtually no bases abroad… I invite you to publish the world map in your newspaper and to mark all the US military bases on it. You will see the difference». It would be an interesting development if the New York Times published such a map, but then pigs might fly.

President Putin pointed out that «we are not expanding anywhere; it is NATO infrastructure, including military infrastructure, that is moving towards our borders. Is this a manifestation of our aggression?»

On the other hand, President Obama boasted that «it is America that has rallied the world against Russian aggression» and that «no other nation can play the role that we play in global affairs» because the US «the one indispensable nation in world affairs». He is relentlessly confrontational and proclaimed on 2 October that «Mr Putin had to go into Syria not out of strength but out of weakness, because his client, Mr Assad, was crumbling. Iran and Assad make up Mr Putin’s coalition at the moment. The rest of the world makes up ours». To describe that as immature and insultingly arrogant is to put it mildly.

On Friday 2 October the US and its partner nations in the conflict in Syria, in which they train, pay and equip anti-government «moderate» rebels, issued a statement condemning Russia’s actions in support of the Syrian government. They were «especially concerned about attacks by the Russian Air Force on Hama, Homs and Idlib» which it was alleged without any evidence, «led to civilian casualties».

A few hours later in Afghanistan a US Air Force AC-130 gunship blitzed a hospital in Kunduz city in which there were «80 staff and 105 patients in the hospital buildings at the start of the attack, which lasted from 2.08 am to 3.15 am… 22 people have been confirmed dead, including 12 staff and three children, and more than three dozen others injured. More than 30 staff and patients are still missing».

So much for playing a role in global affairs. It is unfortunate that when the world’s indispensable nation extends its reach, it extends to destruction of hospitals. But it is all in the best interests of accelerated activity.