Apparently, Obama, though he says he hasn’t made up his mind about whether to send weapons to Ukraine, actually has and is. He now seems to be quietly trashing the spirit though no provision in the Minsk II truce that was arranged by Merkel, Hollande, Putin, and Poroshenko, and signed by the OSCE, Russia, Ukraine, and both of the rebelling former parts of Ukraine, the Donetsk People’s Republic and the Lugansk People’s Republic. Obama now appears to be sending heavy weapons to Ukraine, and thus assisting Ukraine to resume attacking the DPR & LPR.

Even conservative Europeans are expressing outrage. Followers of Italy’s Sylvio Berlusconi, and even the leader of Austria’s anti-immigrant “Freedom Party,” are shocked and appalled by this Obama action.

Heinz-Christian Strache, leader of Austria’s Freedom Party, posted online a photo alleged to be of Bradley tanks now on rail-cars in Linz Austria en-route to Ukraine; he estimated 50 of them.

Sighted in Austria, American tanks: “I direct in Ukraine” 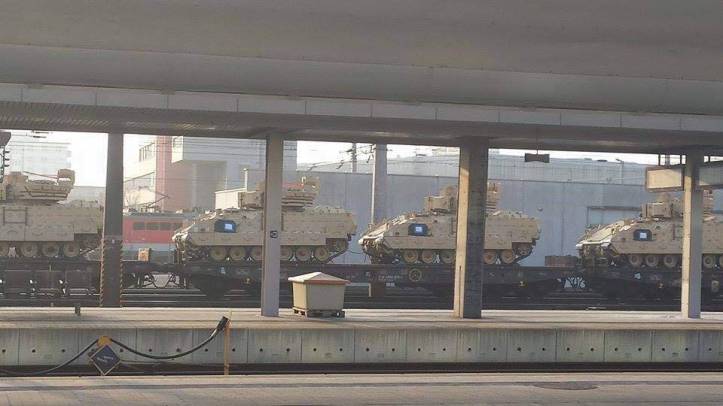 Since the time when America first mentioned the possibility of sending armored vehicles to Ukraine, now seems to be the time passing from words to deeds.

The leader of the Austrian Freedom Party, Heinz-Christian Strache, has posted on Facebook photos showing the first American tanks (approximately 50) traveling to Ukraine.

Strache thinks these are Bradley tanks, entering Austria [from Germany] through Linz. If this interpretation is true, then America would be starting to break, at least formally, the agreements signed by Ukraine and Russia in Minsk.

Here are typical comments at that conservative Italian newspaper online:

If it is the beginning of the end ..

Europe still America … who the hell do they think is Russia? A South American dictatorship (although in some parts of the ‘sticks’ to have also received) or any Saddam or Gaddafi any? Sure to leave rot ‘atomic’ after all the ‘investments’ for them?

On which side is the European ruling class?

Americans have not lost time … only two days ago, the Congress approved the sending of personnel and equipment in Ukraine. Sooner or later Putin will react in front of yet another massacre of pro-Russians (it will be closely hidden by the European media). Damn Americans, are taking us to war without europe saying a single word. damn Italy’s government stooges.

Ukraine has the right to defend its sovereignty and freedom against the Russian invasion. For this it asked for help from Europe and the US.

The US and its servants of the ‘eurozone have failed after 15 years to tame a country primitive gardeners (opium) and shepherds of the mountain as the’ Afghanistan. Do they think they have the upper hand over those who have three thousand intercontinental missiles with atomic bombs, an ‘army of two million combatants determined, and millions of people in Europe are ready to boycott anyway everything stinks of American rule?

After all the c @ zz @ te that America has done over the years and attacking without cause different nations, now meddles in other affairs that do not concern them. Sooner or later these arrogant ones will take beatings on the ears.

Obama is the devil and wants to destroy everything in a third world war. Political Europe assists passively to the end.

libertà73 Too bad he is at 10000km and instead we are here, they think that Russia is Libya or Iraq.

If so, only armored vehicles (even if some of the best armor in the world) are not enough for Ukraine groped to stop an invasion of the second strongest army in the world. But Americans know what they do. Definitely will send soon in Ukraine even missiles and fighter-bombers (in addition to the aircraft carrier in the Black Sea). Obviously, this attitude will be interpreted by the Russians as an attempt at aggression against them. At that point there will have little importance for reason and will start the Third World War. Five hundred million lives gone will make survivors think.