Defense One
by Molly O’Toole

A top United States general in charge of protecting the southern border says he’s been unable to combat the steady flow of illegal drugs, weapons and people from Central America, and is looking to Congress for urgent help.

Marine Corps Gen. John Kelly, commander of U.S. Southern Command, has asked Congress this year for more money, drones and ships for his mission – a request unlikely to be met. Since October, an influx of nearly 100,000 migrants has made the dangerous journey north from Latin America to the United States border. Most are children, and three-quarters of the unaccompanied minors have traveled thousands of miles from El Salvador, Guatemala and Honduras.

“In comparison to other global threats, the near collapse of societies in the hemisphere with the associated drug and [undocumented immigrant] flow are frequently viewed to be of low importance,” Kelly told Defense One. “Many argue these threats are not existential and do not challenge our national security. I disagree.”

In spring hearings before the Senate and House Armed Services Committees, Kelly said that budgets cuts are “severely degrading” the military’s ability to defend southern approaches to the U.S border. Last year, he said, his task force was unable to act on nearly 75 percent of illicit trafficking events. “I simply sit and watch it go by,” he said. But the potential threats are even greater. Kelly warned that neglect has created vulnerabilities that can be exploited by terrorist groups, describing a “crime-terror convergence” already seen in Lebanese Hezbollah’s involvement in the region.

“All this corruption and violence is directly or indirectly due to the insatiable U.S. demand for drugs, particularly cocaine, heroin and now methamphetamines,” Kelly told Defense One, “all of which are produced in Latin America and smuggled into the U.S. along an incredibly efficient network along which anything – hundreds of tons of drugs, people, terrorists, potentially weapons of mass destruction or children – can travel, so long as they can pay the fare.”

With the Obama administration calling the flow of children in the U.S. a humanitarian crisis, even some of the most outspoken proponents of immigration reform in Congress are calling for a greater focus on security. At the same time, they demand a long-term strategy from the State Department and U.S. Agency for International Development, which manages foreign aid and assistance.

“While the deployment of U.S. military assets and personnel rightfully prioritizes national security challenges in the Middle East and Central Asia, U.S. Southern Command (SOUTHCOM) is only sourced at five percent of the capacity it needs,” Senate Foreign Relations Committee Chair Sen. Bob Menendez, D-N.J., and other leading reform Democrats said in a statement last month, introducing a 20-point plan to address the crisis.

The Democratic coalition wants increased funding and resources for SOUTHCOM and the State Department’s Central American Regional Security Initiative. For fiscal 2015, the Obama administration requested $130 million for the program, which covers seven countries, but that ask is a decrease of $30 million from the current year, the senators noted. Homeland Security Secretary Jeh Johnson has said an additional $161.5 million will be provided for CARSI programs to “respond to the region’s most pressing security and governance challenges” – but the administration has made no mention of additional resources for the U.S. military.

President Obama’s request for foreign assistance to Mexico, Guatemala, Honduras and El Salvador totals more than $280 million in fiscal 2015. After Vice President Joe Biden met in Guatemala last month with leaders from that country, Mexico, El Salvador and Honduras to address the wave of children crossing the U.S.-Mexico border, he announced $9.6 million in new assistance to Central American governments for repatriation of their citizens, improving security and preventing crime, as well as a series of USAID programs. Under USAID, $40 million dollars will go to Guatemala and $25 million to El Salvador. Under CARSI, an additional $18.5 million will go to Honduras.

Last fiscal year, U.S. Customs and Border Patrol apprehended more than 26,000 unaccompanied children at the Southern border, according to U.S. Customs and Border Protection. But so far this fiscal year, from last October to mid-June, that number has doubled to more than 52,000, an increase of 99 percent. Some 50,000 unaccompanied minors have been referred to the Department of Health and Human Services, spokesman Kenneth Wolfe told Defense One. Federal officials say the number of unaccompanied minors caught crossing the border this year could reach some 90,000. In response, Johnson has sent hundreds of additional border agents to the affected areas and enlisted the Coast Guard, which is loaning aircraft to help transport some of the immigrants. 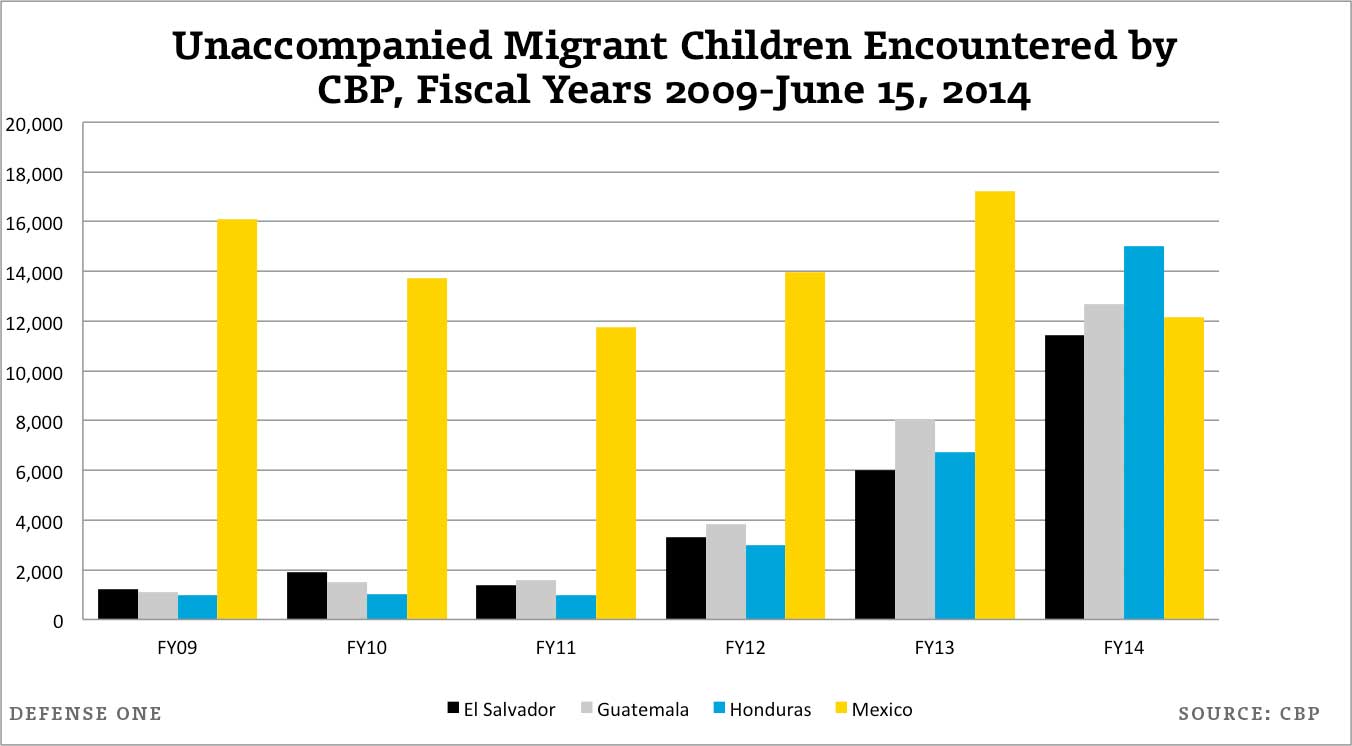 Defense Secretary Chuck Hagel, who visited Guatemala and Mexico in Aprilto reaffirm the U.S. commitment to the region, authorized HHS to house 3,600 children at military bases and Defense Department facilities for up to 120 days, with HHS reimbursing the Pentagon for the costs. DOD is temporarily lending space for some 1,200 minors at Fort Sill in Oklahoma, 575 minors at Ventura Naval Station in California, and another 1,200 minors at Lackland Air Base in Texas. The facilities are reaching the limits of the agreement, but Pentagon spokesman Lt. Col. Tom Crosson said Wednesday that additional sites are being considered. HHS officials are inspecting facilities at Joint Base Lewis-McChord, in Washington.

Meanwhile, Obama’s national security team continues to try and draw attention to Central American countries thousands of miles away from the U.S.-Mexico border. Secretary of State John Kerry on Tuesday traveled to Panama to discuss long-term solutions with the leaders of El Salvador, Guatemala and Honduras. Next week, Johnson heads to Guatemala.

On Monday, Obama took executive action, saying he will use expanded powers to address the situation. In a letter to Congress, he said he would be requesting emergency appropriations to support “an aggressive deterrence strategy” and “a sustained border security surge.” Obama is expected to request roughly $2 billion for additional border security personnel, immigration judges, detention and processing resources and assisting Central American partners with repatriation, with formal details to come once Congress returns from recess. “We now have an actual humanitarian crisis on the border that only underscores the need to drop the politics and fix our immigration system once and for all,” Obama said Monday.

But Gen. Kelly says the poverty and violence prompting the migration have created a real threat to U.S. national security. Honduras, El Salvador and Guatemala have the first, fourth and fifth-highest homicide rates in the world and “have left near-broken societies in their wake,” he said.

“Although there are a number of other countries I work with in Latin America and the Caribbean that are going in the same direction, the so-called Northern Triangle (Guatemala, El Salvador and Honduras) is far and away the worst off.”

In Congress, the unaccompanied children crisis has revived a heated political debate, with immigration reform advocates and opponents claiming an “I told you so” moment.

Many Republicans who have effectively blocked reform efforts blame Obama, saying his “amnesty” immigration policies have incentivized the mass migration from Central America. In a letter dated June 20, House Speaker John Boehner, R-Ohio, called on the president to send the National Guard to the border. On Monday, freshman Rep. Randy Weber, R-Texas, introduced legislation to stop all aid to Mexico, Honduras, Guatemala and El Salvador.

Immigration reform advocates have pushed back, instead citing the humanitarian crisis as proof that the U.S. immigration system is in dire need of fixing. The recent arrivals would not qualify under Obama’s Deferred Action for Childhood Arrivals program, nor the comprehensive immigration reform legislation that passed the Senate a year ago and, advocates note, Central American migrants don’t track U.S. politics to that detail. Yet many in the region are familiar with the U.S. immigration system through the experiences of family members or neighbors. Unaccompanied minors from Central America who are apprehended in the U.S. by immigration officials can’t be immediately deported, unlike those from Mexico. Due to the already-existing backlog in immigration courts, deportation proceedings can take years, during which they will often remain in the U.S. with a family member or guardian, leading immigration court notices to be referred to as “permisos,” a pass to stay. And “coyotes,” people who traffic drugs and humans along well-established routes through Central America to the U.S., are profiting off of the apt perception.

The administration has sought to counter the influx with strong warnings for parents about the dangers to children and stating clearly that unaccompanied minors will be sent back.But that campaign has prompted further outcry from advocates who have long claimed Obama’s policy helps demonize migrants by focusing too much on enforcement.

The security and humanitarian concerns are bipartisan. Texas Reps. John Cornyn, a Republican, and Henry Cuellar, a Democrat who represents the Rio Grande Valley area processing most of the immigrants, wrote the administration last month, asking: “Has the surge in illegal border crossers and the number of unaccompanied [undocumented immigrant] children apprehended by DHS diverted critical resources away from your department’s border security and national security objectives?”

Border hawks who call for “enforcement first” immigration policy have criticized the response as insufficient. But the Obama administration has conducted more deportations in 6 years than the President George W. Bush administration did in 8, and has effectively transformed the U.S.-Mexico border.

After 9/11, Bush pushed immigration agents to take on more of a national security role, eventually folding them into the Department of Homeland Security in 2003. Obama has ramped up these efforts. Spending on federal immigration enforcement spiked by 300 percent between fiscal 2002 and 2013, according to the Migration Policy Institute, and has now reached roughly $17 billion per year. CBP has even conducted over 700 missions as part of its drone program. And Crosson, the Pentagon spokesman, said that National Guard troops deployed to the border in 2010 to assist with monitoring continue to operate in that capacity. 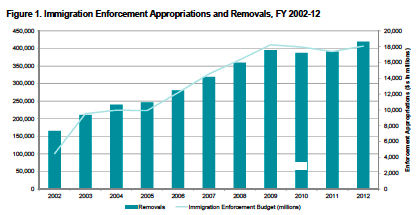 Historically, U.S. security forces have played a dark role in the struggles of Central America, and Kelly said the military has refined its mission there to be “sensitive to perceptions of militarization of the region.” Much of the most recent relationship with the region has remained focused on military assistance to fight the drug war. The extent of joint operationswith the American DEA, FBI, CIA and military and their Central and South American counterparts is unprecedented. Much of U.S. assistance to Mexico and Central America has come under the Merida Initiative, intended to strengthen these countries’ own security capabilities. Since Congress first funded Merida in 2008, lawmakers have appropriated about $2.4 billion to Mexico and approved Mexico’s purchase of 18 Blackhawk helicopters.

Given the concerns about militarization and “minimal Department of Defense resources” to confront security threats deeply rooted in social issues, Kelly said that the U.S. military mission in Central America has redirected its focus to the institutions in those countries that are involved in border and maritime security. But the attempts to hide U.S. military involvement in border security may have backfired, now that the U.S. needs the military’s help to protect the border more than ever.

“This region does not ask for much…. Some of my counterparts perceive that the United States is disengaging from the region and from the world in general,” Kelly said. “We should remember that our friends and allies are not the only ones watching our actions closely. …And in the meantime, drug traffickers, criminal networks, and other actors, unburdened by budget cuts, cancelled activities, and employee furloughs, will have the opportunity to exploit the partnership vacuum left by reduced U.S. military engagement.”