The Truth About Columbus Day

The atrocities committed by Columbus and his crew were just the beginning of the American holocaust which eventually destroyed a vast and thriving civilization. 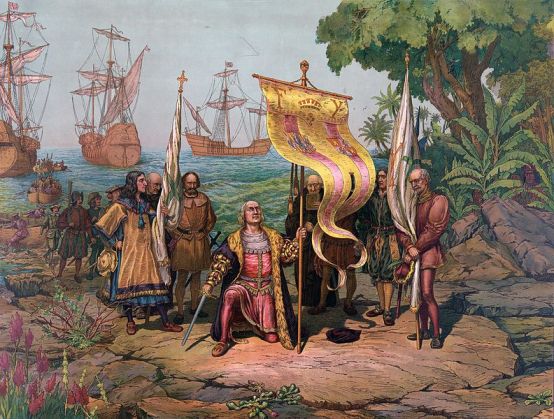 The time has come to stop celebrating genocide in the name of the Columbus day tradition. The version of mainstream history told in most schools says that the American continents were a vast uninhabited wilderness before western “discovery”, however there was actually a massive native population that numbered in the hundreds of millions.

Traces of this large population seemed easy enough to destroy at first, considering the natives put a great deal of care into making as little an impact on their environment as possible. However, as time passes archeologists are continuing to uncover evidence that the pre Columbus civilizations were much more advanced and populated then the historical record tells us.

Even the ship logs of early European explorers show us a much different story than we were told in history class.

That’s not the only thing we were lied to about in history class. The ruling elite were also well aware that there were unexplored continents on the other side of the Atlantic Ocean. Many early European civilizations took voyages to the other side of the Atlantic over a thousand years ago, it is even believed that early Irish and Norse cultures actually had trade established with some Native American tribes.

All of this information was hidden from most of the general public, only the nobility who were literate and had a decent understanding of history knew that the world was twice as big as most people believed. Oppressive, warmongering rulers always hide important information from their subjects so they are easier to control and more willing to accept sub par living standards, this situation is no different. The myth that the world was flat was merely propaganda to keep explorers from traveling west and discovering the new world before the monarchy was able to claim it.

Due to lack of resources and the extensive crusades and inquisitions that were raging in Europe for many centuries, it took the elite until 1492 to make their official move across the Atlantic Ocean. Prior to this, only exploratory voyages were taken to the new world in order to prepare and gather information for future colonization.

When the elite were ready for conquest they sent an inquisitor and mapmaker by the name of Christopher Columbus to begin the Native American genocide and colonization process. Columbus was not an explorer, but one of the few elite members of society that had access to occult information such as the existence of the Americas.

He knew exactly where he was going when he set sail across the Atlantic Ocean. He most likely obtained this knowledge through a secret society he belonged to called “the Knights of Christ” ,which was apparently a surviving order of the Knights Templar. This connection would explain why all of the ships from his famous first voyage were flying the colors of the Knights Templar, the Maltese Red Cross. Regardless of where Columbus got his information his mission was certain, to harvest natural resources using native slave labor and to claim land for the monarchy. This colonization would be the start of the most brutal genocide in known human history.

When Columbus reached the new world he arrived in the Caribbean islands and established his first settlement in what is now Haiti. Upon their arrival the Europeans immediately started looking for gold and began persecuting the native people.

Columbus was under extreme pressure to return to Europe with as much gold as possible, in order to repay the monarchy for funding his voyage. To speed up the process Columbus and his men became even more brutal with the native people.

They ordered every man, woman and child they found to collect a certain amount of gold every three months. The natives that reached their quota would receive a copper token that they would wear around their neck.

If they were found without these tokens they were brutally tortured and murdered. Because of the trusting nature and disposition of the native people, the barbarian conquerors easily took advantage of them. In old ship logs we can see the ignorant and ruthless attitude that the European invaders had towards the indigenous people.

In his journal Columbus wrote “they are so naïve and so free with their possessions that no one who has not witnessed them would believe it. When you ask for something they have, they never say no. To the contrary, they offer to share with anyone. They brought us parrots and balls of cotton and spears and many other things, which they exchanged for the glass beads and hawks’ bells. They willingly traded everything they owned…. They do not bear arms, and do not know them, for I showed them a sword, they took it by the edge and cut themselves out of ignorance. They have no iron. Their spears are made of cane. They would make fine servants. With fifty men we could subjugate them all and make them do whatever we want”.

The atrocities committed by Columbus and his crew were just the beginning of the American holocaust which eventually destroyed a vast and thriving civilization. Over the half millennia that followed different European nations set up colonies in lands that did not belong to them and killed hundreds of millions of people to do so.

Hundreds of years of murder and displacement have left the native shaman people with a fraction of their population, all of which have been forced onto small concentration camp like reservations. The age of imperialism saw the genocide of many civilizations in Africa, Australia and Asia as well as the Americas.