The New American
by Selwyn Duke 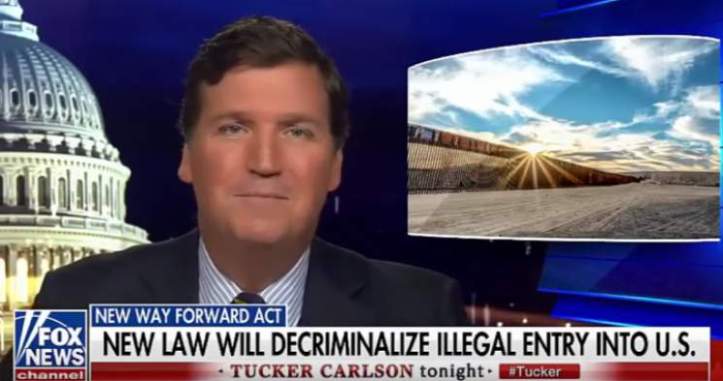 What would you say about legislation requiring the government to use tax money to transport convicted criminal illegal aliens who’d already been deported back to the United States, calling it the “right to come home”?

What if that bill also created a situation in which a known Mexican drug cartel leader could be released from prison, enter the United States “illegally,” and it would no longer be a crime? Such radical and self-destructive legislation has already been proposed.

It’s called the New Way Forward Act (H.R. 5383), and it goes way beyond Hillary Clinton’s 2013 call for a “hemispheric common market” with “open borders,” according to commentator Tucker Carlson. In fact, it would be the coup de grâce to our already balkanized country, reflecting a radical new Democratic Party that views our nation as “a rogue state, in which everything must be destroyed and remade: our laws, our institutions, our freedoms, our history and our values,” as Carlson put it on last night’s edition of his Fox News show.

Just as shockingly, this nation-rending bill has received virtually no media attention, tragic as it “would entirely remake our immigration system, with the explicit purpose of ensuring that criminals are able to move here, and settle here permanently, with impunity,” Carlson also relates.

The commentator calls the NWFA “the most radical single piece of legislation we’ve [ever] seen,” making the Green New Deal, and proposals to end fracking via executive order and nationalize healthcare seem sane by comparison. The bill’s promotional materials actually state, “Convictions … should not lead to deportation” Carlson reports.

Targeted are serious convictions, too — felonies bringing years in prison. Currently, “legal U.S. immigrants can be deported if they commit an ‘aggravated felony’ or a ‘crime of moral turpitude’ — that is, a vile, depraved act, like molesting a child,” explained Carlson. Yet under the NWFA, “‘crimes of moral turpitude’ are eliminated entirely as a justification for deportation. And the category of ‘aggravated felony’ gets circumscribed too” (video below).

The NWFA also would, according to Carlson,

• end automatic deportation for all crimes, including robbery, fraud, and child sexual abuse;

• raise the minimum sentence triggering deportation, for crimes that still require it, from one to five years. Note that “crimes like car theft, fraud, and weapons offenses all carry average prison sentences of fewer than five years,” informs Carlson. Moreover, some rapists, child abusers, and even killers receive less time than that. Yet aliens thus convicted would stay in our country and eventually receive citizenship;

• allow drug addicts and those convicted of drug crimes abroad to immigrate to the U.S;

• decriminalize illegal entry, even for the previously deported. The NWFA asserts that “criminalizing illegal entry … is ‘white supremacist,’” relates Carlson; and

In summary, it would be much harder arresting illegals than arresting you. “They’re the protected class here. You’re just some loser who’s paying for it all,” laments Carlson.

As for the aforementioned “right to come home,” it would include tens of thousands of aliens expelled from our country for manifold crimes: “Sexual abuse. Robbery. Assault. Drug trafficking, weapons trafficking, human trafficking,” Carlson further reports.

In fact, from “2002 to 2018, 480,000 people were deported for illegal entry or reentry into America,” Carlson continues. The NWFA would force us to buy them all plane tickets back here — costing approximately a billion dollars — “and that’s before Democrats make you start paying for these criminals’ free health care, too. Which they plan to,” Carlson adds.

It’s not surprising the mainstream media have suppressed this story. It reveals, right before an election and in stark terms, the new Democratic Party’s face: radical, anti-American, angry, and bent on our nation’s destruction.

Of course, as with most all of today’s illegal and legal immigrants, the vast majority of these “new Americans” would vote Democratic. That’s the whole idea, too: The Left wants an “entirely new country, in which resistance is crushed, and they’re in charge forever,” Carlson concludes.

The NWFA won’t likely pass and be signed into law anytime soon. But know that this is precisely what the Democrats’ ascendant AOC/Sanders wing — which will one day control the whole party — has in store for us. They are the Enemy Within.

Selwyn Duke (@SelwynDuke) has written for The New American for more than a decade. He has also written for The Hill, Observer, The American Conservative, WorldNetDaily, American Thinker, and many other print and online publications. In addition, he has contributed to college textbooks published by Gale-Cengage Learning, has appeared on television, and is a frequent guest on radio.