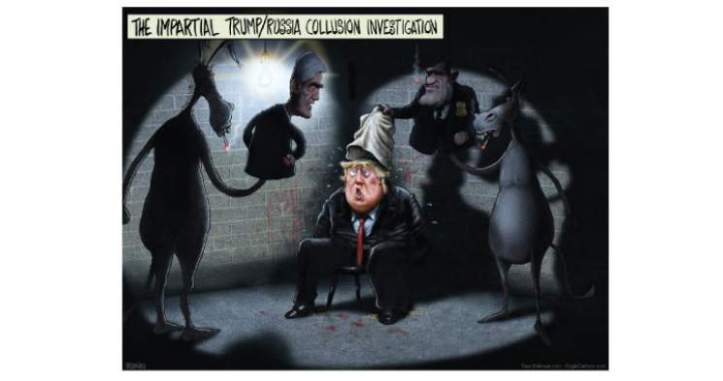 For the past year and a half, the American people have been subjected to a steady drumbeat of stories and charges alleging collusion between Donald Trump and Vladimir Putin. During the final weeks of the 2016 presidential campaign, Hillary Clinton, along with her political surrogates and media allies, ramped up her accusations of treasonous actions by Candidate Trump and his entourage. After losing the November election, Clinton & Company doubled down on the “Trump-Russia collusion” hysteria, attempting to derail the Trump train at the Electoral College vote in December.

That effort failed also, but the Trump-Kremlin conspiracy theorists did not let up. They have continued their efforts to delegitimize and hamstring the Trump administration, aided by Deep State operatives who have corrupted and politicized our federal intelligence and law-enforcement communities. Former CIA Director John O. Brennan, former National Intelligence Director James Clapper, and former FBI Director James Comey have played the chief roles in attempting to provide a semblance of credibility to the claim that Russia aided Trump in order to keep Hillary Clinton out of the White House. They have made repeated, outlandish statements to this effect, but always without providing any substantiating evidence.

This unholy trinity — Brennan, Clapper, and Comey — and a significant contingent of their agency minions led a massive disinformation campaign, unprecedented in scope, aimed at the American people. It was (and is) nothing less than a treasonous coup effort to overturn the results of a legal, constitutional election. The fact that these globalist operatives no longer occupy their official governmental posts has not stopped them from pursuing the same nefarious objective. They, along with many of their minions, have simply moved their operations over to CNN, MSNBC, PBS, the Washington Post, and other globalist propaganda founts. Perhaps it is fitting that Brennan, Clapper, and Comey, who have been publicly exposed as notorious liars and leakers, are joining up with the Liars-R-Us “mainstream” media.

February was a busy month in the ongoing coup/anti-coup political drama. On February 2, the House Intelligence Committee released its long-awaited memo that provided important details and confirmation concerning the Obama administration’s illegal use of the Foreign Intelligence Surveillance Act court warrants to spy on Donald Trump — and millions of Americans. The memo had been held hostage for weeks by Democrats on the committee. The Democrats, led by Representative Adam Schiff of California, then issued their own memo as a rebuttal, and the Republicans issued their rebuttal of the rebuttal. In the midst of all this, on February 16, former FBI Director Robert Mueller (now special counsel in the Trump-Russia investigation/witch hunt) issued grand jury indictments for 13 Russian nationals and three Russian companies. The indictments, which accuse the Russians of attempting to influence the 2016 presidential election, mostly through social media, do not implicate President Trump or any of his associates in any way.

However, lest we forget, let’s look back at the genesis of this “Trump-Russian collusion” trope and how it came to be the vehicle that very nearly destroyed our Republic (and still could). On June 12, 2016, in the midst of the heated U.S. presidential election, WikiLeaks spokesman Julian Assange announced that he had a huge cache of damning e-mails from the Democratic National Committee that he would soon be releasing. The DNC, Hillary Clinton, and her campaign chief, John Podesta, immediately went on the offensive with a preemptive strike. With help from media allies, they would divert attention from what was in the e-mails to how they were (allegedly) obtained. On June 14, two days after the WikiLeaks announcement, the DNC announced that the cybersecurity firm CrowdStrike had determined that malware had been inserted onto the DNC server by Russian hackers.

Amazingly, rather than utilizing the multi-billion-dollar facilities and top-of-the-line analysts at the FBI and NSA to analyze the DNC computer server, the Obama-run FBI, DOJ, and “intelligence community” simply rubberstamped the unsubstantiated “Russian fingerprints” claim of the DNC-employed CrowdStrike. Many top-notch cybersecurity experts immediately called foul, and issued critiques exposing not only the phony “Russian fingerprints,” but the fact that the DNC data had been copied onto a device, not downloaded via the Internet. In other words, it had been leaked, not hacked. Among the most important exposés is an in-depth report provided by Veteran Intelligence Professionals for Sanity (VIPS), the most well-known member of which is Dr. William Binney, the legendary NSA tech genius and whistleblower. Nevertheless, the Deep State Brennan-Clapper-CNN-NBC disinformation choir continues to promote the Clinton-DNC-CrowdStrike false story of “Trump-Russia collusion.” The battle for freedom rages on.